If anyone wanted to know what Binyamin Netanyahu actually thinks about the peace process, he said it clearly himself last week: According to Netanyahu, the Palestinian appeal to the UN “will gridlock the negotiations for 60 years”. So, 44 years after the occupation and 18 years after the Israeli government and representatives of the Palestinians began negotiating, Netanyahu thinks it feasible to carry on for some 60 more years, give or take. And, naturally, should anything of the sort happen, this will be the Palestinians’ fault. If it were up to him – who refused to accept Obama’s plan and commit himself to the 1967 borders – this would all be over by now. But those sinister Palestinians prefer going to the UN.

And with good reason. Direct negotiations between Israel and the Palestinians, as mentioned, began 18 years ago. They were supposed to be finished by May 1999 with a final agreement. Unfortunately, we’ve been ruled by Netanyahu for three critical years during that time – and, as Netanyahu told his base, the settlers (Hebrew), he did everything possible to undermine the Oslo Accords while pretending to follow it. Then Barak was elected, Arik Sharon climbed Temple Mount, the IDF fired a million rounds in October 2000 while ignoring the government’s orders for a cease fire, the Palestinians began their great terror wave, Sharon became prime minister, and the rest is history. During this period – between September 1993 and September 2011 – the number of settlers in the occupied Palestinian territories more than doubled.

And not by accident: The West Bank settlements were Israel’s most important national project (Hebrew). During the last decade, while the government axed its support of municipal budgets in Israel proper, the budget per settler rose: It reached 951 NIS per settler per year, while the average in Israel was 303 NIS per person per year. Designated Support – another aid budget by the government – was 2,264 NIS per settler, versus 1,478 NIS per Israeli dwelling in a well-to-do city, 1,859 per person in Arab towns and 1,719 NIS per person in the “development towns”, poor Jewish towns. Furthermore, the government was responsible for 50% of houses built in the West Bank and Gaza, as well as for 35% of the funds invested in building there – as compared to 18% of the houses built in Israel proper, which were initiated by the government in only 10% of the cases.

If population growth in Israel proper was 18% on average, in the occupied territories it was 47%. In the early days of the J14 movement, it was noticed that housing in the settlements was much, much cheaper than in Israel; again, this isn’t an accident. Rather, this is the result of a long-range government plan – beginning in the days of Begin – intended to seduce Israelis to abandon Israel and move to the occupied territories, particularly the West Bank.

To quote Ali Abunimah, Israel pretends to negotiate the division of a pizza pie, while munching on the pie. Israel has already swallowed 78% of Mandatory Palestine – even the 1949 lines do not resemble the 1947 UN decision’s borders – and now it is grabbing more and more of the remains, while insisting that any negotiations must recognize “facts on the grounds”, meaning the war crimes it carried out. Anyone negotiating with an Israeli government unwilling to grant the bare minimum, a freezing of settlements during the negotiations (or, in plain English, insisting on right to grab more lands during negotiations) is an idiot. No other way to describe it.

The Palestinians have wised up. They had the sense to turn the situation into an easily understood moral play. They’ll go to the UN, and show Israel, Micronesia and the US what they really are: Lepers in the international community, the last bastions of an occupation regime which, under Netanyahu, even stopped pretending it is temporary. 60 more years, remember? Remember a settler foreign minister telling the UN there will be no peace?

But, terrifyingly enough, it is not at all clear a return to the 1967 borders is still feasible. In the 1980s Meron Benvenisti presented a scandalous thesis: That given the number of settlers in the West Bank and Jerusalem, the two state solution is a fiction; the facts on the grounds were that of a bi-national state. It did not make him many friends on the Israeli left.

When Benvenisti wrote that, the number of settlers in the West Bank was about 30,000. Now it is more than 300,000. Given what happened during the Disengagement, Israel will not survive such an evacuation – if only for the reason that giving each West Bank settler the same terms granted the spoiled Gush Katif settlers will drive it into bankruptcy. And even if it were to offer such terms, there’s a strong chance of a military coup.

Furthermore, the settlements were built, on purpose, as mines – intended to blow up any chance of a Palestinian state. A few days ago I participated in a tour held by the Ir Amim association, which explains the complex, not to say insane, reality in greater Jerusalem. A quick look at the map they gave us (you can see it here) says all there is to say: You can’t divide this place. Have a look: The blue line is Jerusalem’s fictive municipal border after the annexation of 1967. The blue smudges are settlements. Note the bulge of the red line eastwards – this is the plan of the separation wall, euphemistically called Otef Yerushalaim, “Wrapping Jerusalem”, intended to make the settlements of Ma’aleh Adumim, Kfar Adumim and the rest a part of “Greater Jerusalem”.

Look to the southwest. Here we have a series of settlements – Gilo, Har Homa, and others – whose residents don’t even know they’re settlers. They’ve been taught they live in Jerusalem. They have no idea, and not by accident, that the place they live in was never a part of Jerusalem in any meaningful way. These settlements simply cannot be evacuated. 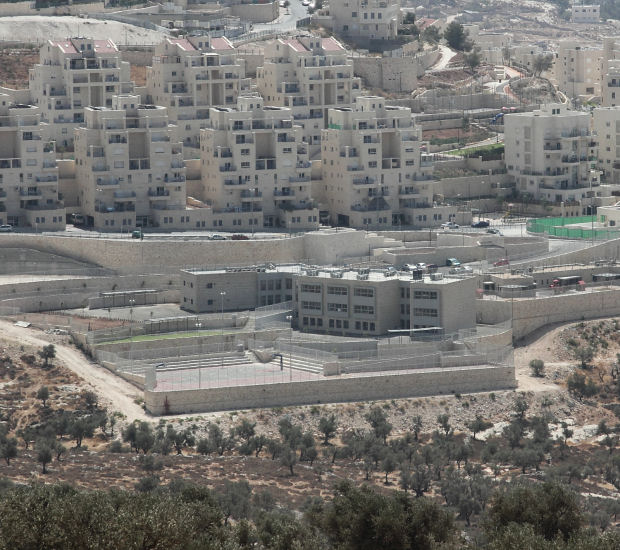 This makes the Palestinian move in the UN, which will make it clear to Israel that the current situation cannot go on, a good first move, which ought to be supported by all Israeli patriots. But, given that the Netanyahu government will remain obdurate, and will not allow the creation of a feasible Palestinian state, the second act of the Palestinians should be clear cut: They ought to demand that Israel will recognize anyone living in the de-facto country between the Mediterranean and the Jordan River as an equal citizen. Because the other solution, the existence of an apartheid state while waiting for Netanyahu’s 60 years to pass is morally unacceptable.

And no, it won’t be easy. And yes, this will have a cost in blood, treasure and abandoned paradigms, foremost among them Zionism. And yes, terrorists from both sides, supported by elements of their side’s armed forces, will try to prevent such a solution. And it’s not at all clear that Jews and Muslims – and in the Middle East, of all places – can recognize others as equals. But, 44 years after the occupation, we have exhausted all other possible solutions. Time to make a decision.