The wall was built to stop suicide bombers from entering Israel, so they say. But the people who do enter Israel on a daily basis are the tens of thousands of Palestinians who work here. Some go through hours of waiting at checkpoints, others climb the wall and risk injury or arrest – but all have experienced a dramatic change for the worse in their lives.

We arrive at Eyal checkpoint at 4:30 a.m. The sky is pitch black yet minivans packed with laborers are already passing us in the opposite direction on their way to work. We park outside the massive checkpoint compound, and wander amongst the hundreds of people who are talking quietly, drinking tea, praying or sleeping on the ground. All are waiting. All are expecting to work.

Dozens of “service” taxis are spread all around. Drivers yell out names of Israeli cities: “Kfar Saba!” – “Netanya!” – “Herzliya!” Workers whose employers do not arrange for transportation board the taxis, while others wait to be picked up. At around 5:30, the employers start showing up with trucks labeled with names of construction, engineering, carpentry and metal work companies. 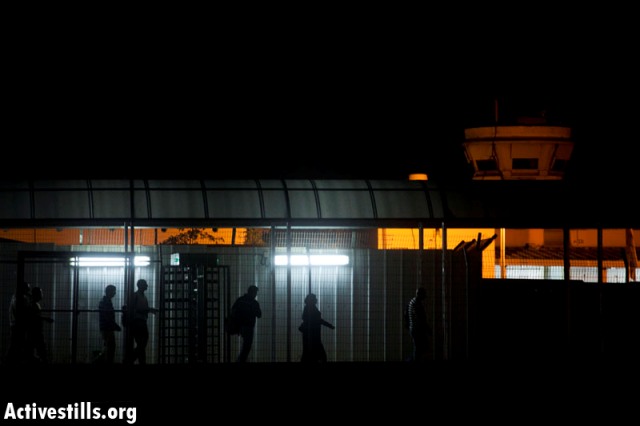 The local taxi company is run by Palestinians with Israeli citizenship. At first they fear that we are tax inspectors, but when they pull out a phone and quickly check out my caricature and stories from +972, they start chatting freely about the hardships the workers suffer, about the difficulties caused by the wall, and especially about the x-ray machine used in the checkpoint – which all the workers believe causes cancer and impotence.

The story of the machine reminds me of my last visit to this checkpoint on the outskirts of Qalqilya, when three years ago the workers went on a unique strike, all refusing to pass through the checkpoint due to what they defined as its humiliating conditions. The place had recently been privatized, and was now run by the “Modi’in Ezrahi” company. A director from the company came to negotiate with the spontaneous leadership that had sprung up. The workers won. Almost all of their demands were met: a separate route for women with female inspectors, a new area slated for prayer outside the checkpoint, sheds for shelter from the rain, and speedier and more dignified treatment by the staff. Only that machine was left unchanged.

Three years have passed, and things have changed. The checkpoint has grown considerably, and now looks like a giant factory, manufacturing human beings at a pace of two or three per second. At least 2,000 people appear to go through here on a regular day, and even more on Sundays. The area where people wait now has a place for prayer, a small coffee shop, and a shed – in and around which many people sleep until their employers arrive. 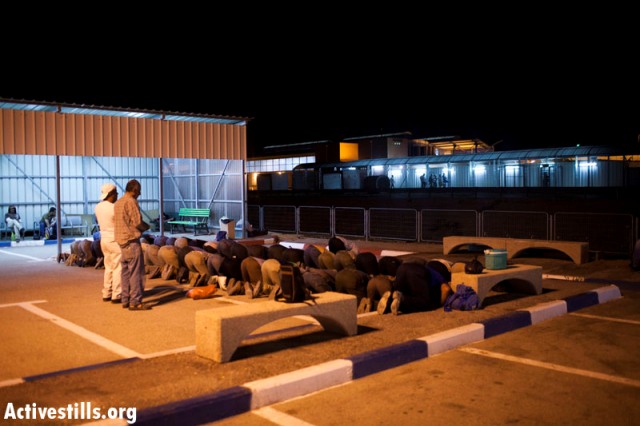 Outside the shed a group of workers is sitting around a fire with a big pot of tea. “I’ve been working in Israel for years in construction, and although it pays okay, things have deteriorated a lot since the wall,” says Sabber (alias). He’s 54 years old and has been working in Israel consistently since the age of 13, but only speaks Arabic. “Once, you could go to work any way you wanted to. Now you have to go only through this bottleneck of a checkpoint. It means getting up at 3 a.m., standing for hours in line, and then waiting here until the sun is up. You get back home after the sun sets, you sleep a little, then off again to work. It’s like leaving and returning to prison every day, but we don’t have a choice.”

It’s hard to say exactly how many Palestinians work in Israel on a regular basis. Estimates range from between 60 and 80 thousand – half legally, half not. A 2007 B’Tselem report on the violence of security forces against workers without permits stresses that a fundamental provision in international law requires an occupying power to guarantee the well-being of people under its military rule. In 1983, then vice president of the Israeli Supreme Court, Meir Shamgar, ruled that this duty implies that Israel cannot detach its own economy from that of the occupied Palestinian territories. “Any detachment of the economies is liable to have immediate ruinous effects on the economy of the territories and on the welfare of the population living there,” wrote Shamgar.

The report also elaborates on how Israel purposefully under-developed the Palestinian economy, leading to its dependence on workers traveling to work for Israelis in settlements and in Israel itself. The blockades, the permit regime and the wall – which came as security measures – created an economic crisis and a drastic rise in unemployment. These were just partial effects the wall had on Palestinian society. 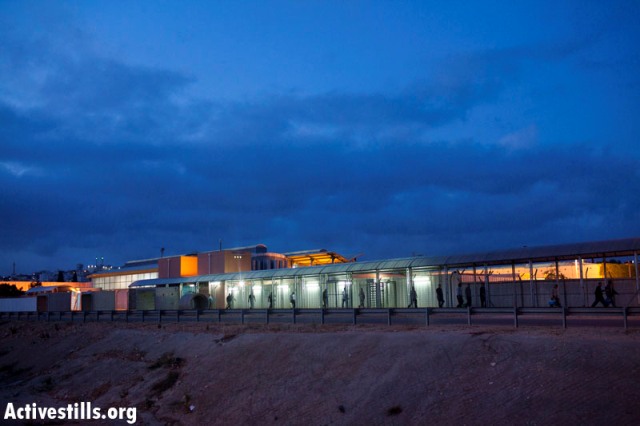 “More and more workers are now forced to sneak through parts of the wall still unbuilt, climb over it, or pay a lot of money for truck drivers to hide them in their cargo,” says Ahmad Sub-Laban of the organization Ir Amim, which focuses on the political future of Jerusalem. “They have to get up very early to dodge army patrols, while people who have permits must get up earlier for the long lines at the checkpoint – so that everybody starts their day at around 2 or 3 a.m. Due to the effort and high costs of the journey, more people choose to stay at their place of work throughout the week, causing a disconnect from the family and extra costs for a bed and food, which get subtracted from their pay checks. At the same time, workers get paid less and less, as those without permits are more desperate, and those with permits depend on their employer to renew their permits every three months – so they have to accept his terms.”

Several NGOs have also documented a growth in work related injuries and deaths of Palestinian workers due to the wall. Some report that employers save money on safety equipment on construction sites, and others stress the many accidents caused by climbing the wall. “People break bones falling off the wall, or get run over by cars in the highways near the wall, in addition to accidents at work,” says Abed Dari of Kav La’oved, a workers rights NGO. “The employers’ solution to this is almost always to send them back to their villages, or drop them off at a checkpoint, just to save money on healthcare.”

Sabber and his friends who hold permits get up early in the morning to go through the checkpoint and try to make a living at Israeli construction sites. Anyone can see them, every day, at the special designated checkpoints along the wall – checkpoints which separate two territories that are both controlled by Israel, through which Israelis and Jews can cross freely both ways.

It is those workers without permits that it is harder to see. Harder – but not impossible. In 2009, Israeli director Daniel Gal accompanied a group of such workers as they sneak illegally into Jerusalem, and documented them in a short film called “Nine to Five,” produced for Ir Amim.

The film shows a group of men of different ages as they carry their small parcels in the dead of night, avoid patrols, call scouts who inform them of dangers on the way,  climb a series of walls, crawl under barbed wire, dash across a highway, and disappear into the city for another day of building houses in the Israeli capital.

“For us, going to work is like going to war,” says Nidal Kawasba in the film. He is 31, and has worked in Israel since the age of 15. He has no permit to enter Israel. “Like when preparing for war, you have to take into account that you can get hurt, get killed or be arrested. When we leave our home we say goodbye to our children because we may not return. There is no work in the West Bank. I support my seven children, my wife, my home and my mother too. So I have to work and bring food to my children. We don’t go working for a different country. We work for Israel, building their homes. All I can hope for is that my children have a better future than mine.” 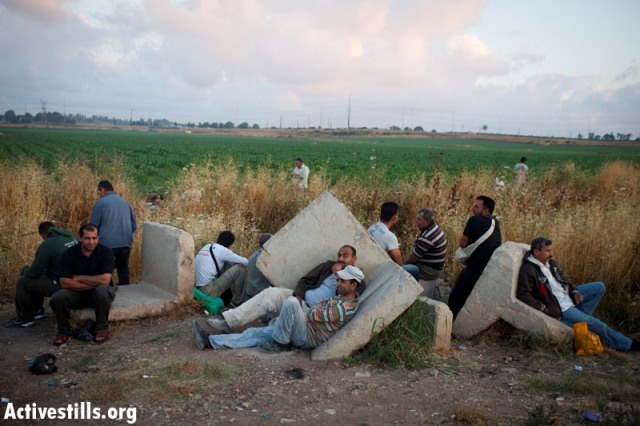 emailemailemail
Before you go…
A lot of work goes into creating articles like the one you just read. +972 Magazine is nonprofit journalism, owned by many of our writers, editors, and journalists. In order to safeguard that independent voice, we are proud to count you, our readers, as our most important supporters. With your support, we can keep +972 Magazine a strong, independent, and sustainable force helping push the global discourse on Israel/Palestine.
DONATE
More About palestinian workers 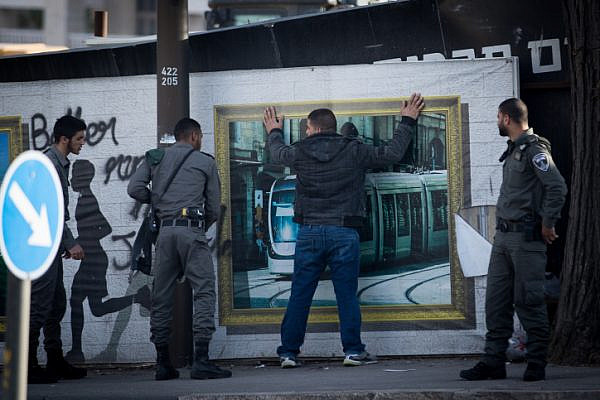 The casual racism of war-time Israel
Trauma and racism are an inescapable part of Israeli society, especially on days when the drums of war are beating. The bike ride along the outdoor platform of Tel Aviv’s central bus station takes about a minute north to south. The area, long neglected by the city, has become home to junkies, sex workers, the…
By Edo Konrad November 13, 2018 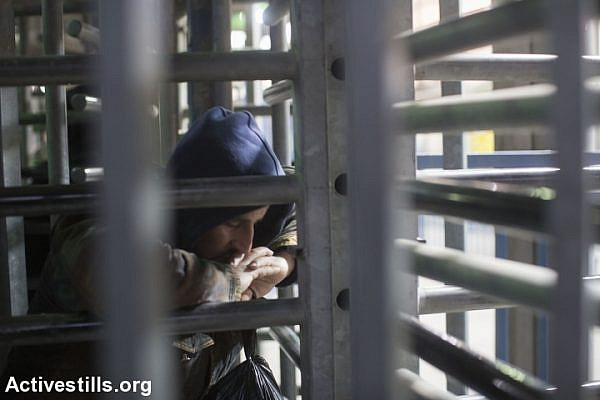