Some 80,000 Palestinians families depend on the annual olive harvest for their livelihoods. This year alone, settlers, with the backing of the army, have destroyed or damaged thousands of olive trees, threatening both a major source of income and an age-old agricultural custom. 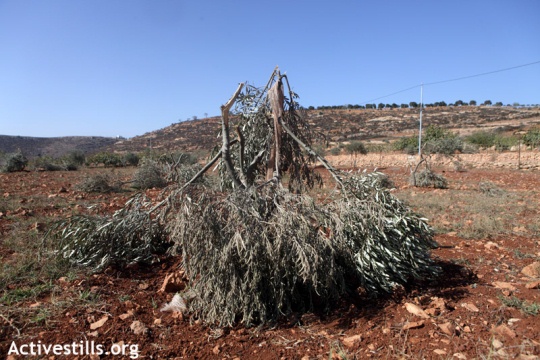 Dry shrubs and a mishmash of makeshift tarpaulin shelters cover parts of this parched valley in the South Hebron Hills. The carcass of a car rests in the bottom of a cistern. According to Breaking the Silence, an organization of veteran combatants that works to expose to the Israeli public to the realities of the occupation, it had been placed there by local settlers in order to contaminate collected rainwater with rust. This is the village of Susya al-Qadima. There is an absence here of local infrastructure, as Israeli civil authorities repeatedly deny building permits, and the entire village has been issued pending demolition orders. Unlike the much younger neighboring Jewish settlement of Susya, it doesn’t get much more arid and inaccessible in the West Bank than here.

Last Saturday, Israeli Border Police declared an area belonging to Susya al-Qadima a closed military zone, effective immediately. An officer waved papers at us and stated that he was legally warranted to force everyone out of the valley. We noticed that the orders were outdated, unsigned, and dictated that only Israelis were prohibited from entering the specified site. This did not stop the temporary expulsion of Palestinian locals.

An activist beside me from Taayush, the Israeli and Palestinian organization which uses non-violent direct action to try and end the occupation, was detained as he argued against the authority’s actions. He was handcuffed and marched to the army pillbox overlooking the valley. The Border Police prohibited locals from farming their own land, manhandled us, and threatened anyone who remained in the area with arrest. Instead of harvesting, the families gathered outside the closed military zone, overlooking their unpicked olive grove from a distance. Just another day in the South Hebron Hills.

Year after year, West Bank farmers experience multiple types of restrictions and physical attacks. In the first week of this year’s olive harvest, more than 870 olive trees were vandalized or destroyed by settlers, according to the United Nations. Hundreds more are reported to have since been damaged or destroyed across the West Bank. A total of some 7,500 olive trees belonging to Palestinians were destroyed or damaged by settlers between January and mid October 2012, according to a recent report by the UN Office for the Coordination of Humanitarian Affairs. Since 2001, half a million olive trees have reportedly been uprooted in the Occupied Palestinian Territories. It takes an average of ten years before newly planted olive trees can begin producing fruit. Consequently, the ramifications of this widespread vandalism are felt long term.

The olive industry in the Occupied Palestinian Territories supports 80,000 families, and accounts for 14 percent of the OPT economy’s agricultural income. The inability of farmers to cultivate or harvest their crops due to security-related pretexts or the physical destruction of trees undermines the fragile Palestinian economy and makes arable subsistence for communities less feasible. With water shortages, restrictions to land access, and the expropriation of land by settlements and the separation barrier, total agricultural output has been seriously damaged. The proportion of GDP earned from agriculture fell from 28 percent to 5.6 percent in the past 20 years.

The Israeli army has rejected claims that it has neglected its legal obligation under international law as the occupying power to protect Palestinian civilians and property. It has repeatedly stated that it works to protect Palestinians and their crops during harvest. “The army, the Civil Administration and other relevant organizations are taking every possible effort to secure the olive harvest,” Israeli army spokesman Eytan Buchman told The Media Line. Facts on the ground and in the courts suggest otherwise. The Israeli NGO Yesh Din has reported that out of the 162 complaints they have lodged about settler attacks on Palestinian trees since 2005, only one suspect has been indicted. The recurrent high levels of violence directed at both Palestinian farmers and their crops is indicative of a pervasive culture of impunity; perpetrators have reason to believe that the Israeli state will not charge them.

The destruction of olive trees is not only economically burdensome for the West Bank economy and its people, but also represents an affront symbolically and culturally. The age-old Palestinian family tradition of harvesting olives and maintaining the trees for the next generations is desecrated annually. While the olive tree has become a symbol of Palestinian steadfastness, the Israeli occupation has in turn become characterized by its destruction.

Later that same day, a Jeep full of soldiers waited alongside us as we picked olives in another grove not too far from Susya. Under the tree, a middle-aged man shook his head as he looked at the soldiers. He pointed at the olive trees and explained which ones are owned by and depended on by which families. “They planted so we can eat, and we must plant so they can eat,” he explained.

This old way of life is alien to the average city dweller but it is a vital lifeline for many people in the West Bank. Due to Israeli political policy, which seems intent on unofficially annexing Area C of the West Bank, in which Susya is located, this means of subsistence is fast disappearing.