Armed men roam the streets, enlisting people to the Al-Aqsa Martyr’s Brigade, Fatah officials call for the end to security coordination with Israel and Mahmoud Abbas is seen as the enemy of the people. Is the explosion closer than we think?

I have just returned from a work visit to Ramallah. I am very concerned and disturbed by what I heard from friends and colleagues there. The calm appearance of the city hides the sizzling bubbling under the surface. The West Bank is on the verge of explosion.

As an illustration of what I’ve heard from people I spoke with, on the way home I listened to some Palestinian popular radio stations. All of the songs were full of praise for Hamas and al-Qassam Brigades – “let’s hit Tel Aviv with our rockets” and much worse . It was horrible to hear the drums of war and battle calls on the radio. 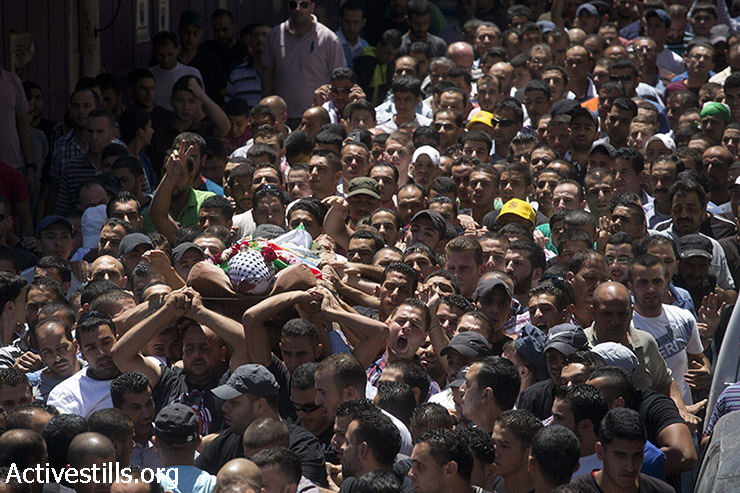 Mourners carry the body of killed Palestinian Mohammed al-Araj, 17, during his funeral at the Qalandiya refugee camp near the West Bank city of Ramallah, on July 25, 2014. Al-Araj was shot with live ammunition in the head the night before during clashes with Israeli army following a mass demonstration against the attack on Gaza. (Oren Ziv/Activestills.org)

I was told that scenes that haven’t appeared for years since the intifada are now all over Ramallah, Bethlehem and throughout the West Bank – street gangs of masked men with weapons calling for young people to join the Al Aqsa Brigades and other battalions – “revenge for the death of our brothers and sisters in Gaza, we are all Gaza, we are all-Qassam Brigades.”

There is no more talk of peace and two states. The discussions on the street and in the cafes are all about the end of the ceasefire and the renewal of war in Gaza. They say the Jews’ war is not against Hamas, it is against all Palestinians, and the Qassam Brigades are the only ones fighting the Zionists, who want to kill all the Palestinians.

Abbas is described almost as a public enemy. Every day, Mohammed Dahlan transmits calls against Abbas and the Palestinian Authority, from the Gulf. Dahlan and other important Fatah leaders in the West Bank are calling on Palestinian security forces to stop the security coordination with Israel and use their weapons against Israel instead. There are calls to attack settlements and to kidnap Israeli soldiers and civilians.

Everyone is watching Al Jazeera and Al Manar, Hezbollah’s television station, seeing the destruction and killing in Gaza. All day long people hear the repeated calls by Naftali Bennett and Avigdor Liberman to kill Hamas leaders, to occupy and destroy Gaza. For them, these are calls to destroy the whole of Palestine.

The peace demonstration in Tel Aviv this week was not aired on any Arab station and the Palestinian public does not hear about Israelis who still talk about peace. 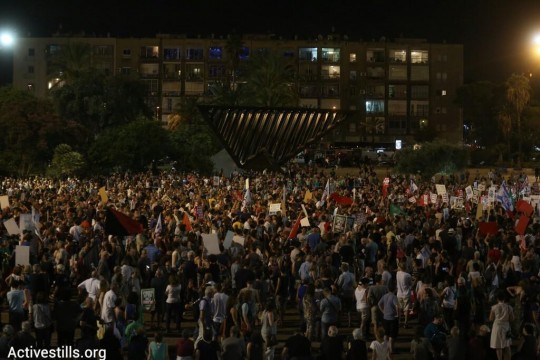 The atmosphere is very pessimistic; people expect that the ceasefire will not be renewed and the fighting in Gaza will resume. After Gaza, the fighting will emerge in the West Bank.

The atmosphere of the war is spreading and the public appears willing to enlist. They know there is much to lose, and yet they feel that this is a war of necessity – a war to protect their home, a war for Palestine.

I know the West Bank well. In recent years I have been there several times every week. What I heard and felt today is very worrying, in part because I also believe that Israel has no idea how explosive the situation is.

There is a kind of complacency, an illusion that what is happening in Gaza does not affect the West Bank. It seems that Israeli security officials and decision makers are completely disconnected from the reality in our backyard.

What happens in the West Bank is also happening across the Jordan river. The explosion when it comes will be like wildfire and will spread across the West Bank into Jordan. It will threaten both the Palestinian Authority and the Kingdom of Jordan. 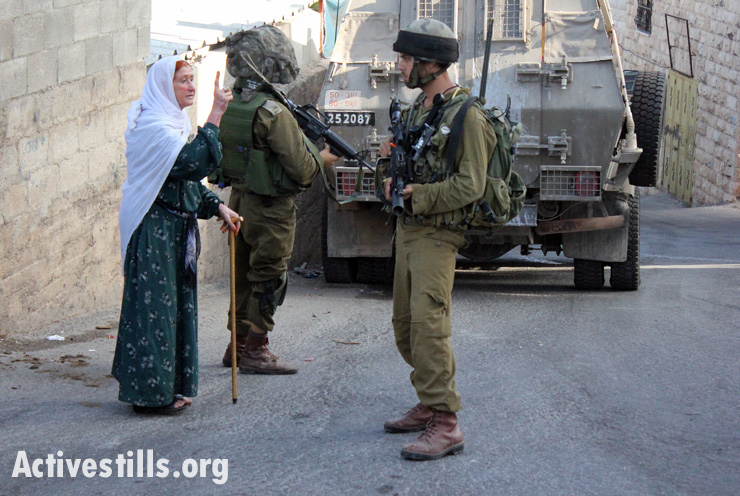 A Palestinian woman shouts at Israeli soldiers during an army operation in which soldiers killed Zakaria al-Aqra, age 24, at his family house in the West Bank village of Qabalan, August 11, 2014. Qabalan village has been raided several times in the last two weeks by the Israeli army.

Only a 180-degree turn by the government, which would mean launching a genuine peace process, can change the direction of the horrors just around the corner. But first we must reach a settlement in Gaza and prevent the resumption of hostilities there.

I tend not to display such prophecies of doom, but the situation now is too serious not to be taken seriously.

Gershon Baskin is the co-chairman of Israel/Palestine Center for Research and Information, and is a contributor to the Jerusalem Post.

Related:
Is the West Bank ripe for an intifada?
10,000 protest in Tel Aviv for a just peace, end to occupation