For the past month, the Holy Land was the only place in the world where time zones are delineated not by geography but by ethnicity. 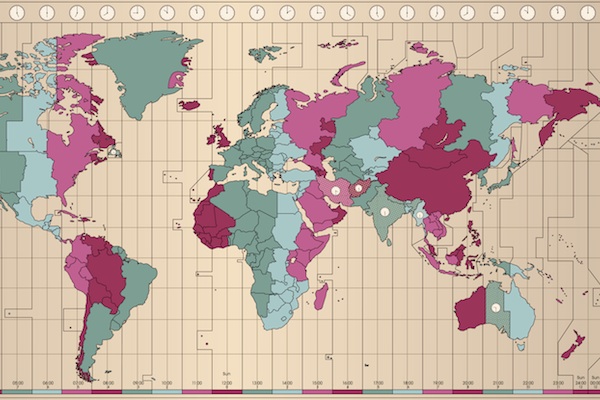 As of this morning, for the first time in a month, all the residents of the Holy Land are living in the same time zone. In late September, the Palestinian Authority switched to winter time, but the West Bank’s Israeli settlers continued living in line with Israel’s clock, which only made the switch today. Thus, for one month, the West Bank became the only place in the world where time is not delineated by geography but rather by ethnicity: different people went about their lives on different clocks, despite the fact that they live in such close proximity to each other within the same territory.

In other words (For the sake of clarifying such strange reality, I add here with thanks a point used in the comments by reader Haifawi) a visitor to the West Bank would be in a different time zone, depending on whether he or she was with Jews or non-Jews.

Settlers today make up over 15 percent of the West Bank population. This means that about every sixth West Bank resident thought an hour ahead of the other five. Drivers passing each other on Route 60 drove in different time zones, depending on the color of their license plates. Meanwhile, while Israelis on both sides of the Green Line shared the same clock, the Palestinian people was divided in, and by, the dimension of time. Palestinians in Israel and East Jerusalem continued to live according to Israeli time, while Gaza went with Ramallah, switching off daylight savings on September 26.

The lives of West Bank Palestinians who work in settlements or with Israelis, or who have any connection at all with Palestinian citizens of Israel or East Jerusalem residents, became highly complicated. Some of them moved between time zones a few times a day. Many had to wake up at unthinkable hours in order to travel to work across the wrinkle of time. Palestinians who live on one side of the separation barrier and work on the other must anyway calculate the travel time to the checkpoint and the wait at it; this month they were forced to add an extra hour to that.

Ironically, the PA’s early change to winter time was meant to provide synchronicity with Israel. In recent years, Israel’s religious Jewish parties pushed for summer time to end ahead of the Day of Atonement, Yom Kippur, in order to shorten the fast and ease the lives of the faithful. This year, with no ultra-Orthodox parties in Netanyahu’s coalition, the date was changed at the last moment. The Palestinians did not adhere to the change, perhaps fearing that a further Israeli change of heart would force them to switch the date once more, and the bizarre delay was created.

In my work as tour guide, I moved between the two clocks all month. Often I was joined by dozens of tour participants, headed from Jerusalem to meet a speaker in Hebron or Nablus, at an hour on which no one was clear. The experience was annoying at times, funny at others. It was far more tolerable than other phenomena of the occupation, but around these parts we long ago learned to cheer the tiniest changes for the better. Today, with the synchronizing of the clocks, such change has occured: the rate of absurdity dropped by a tick.