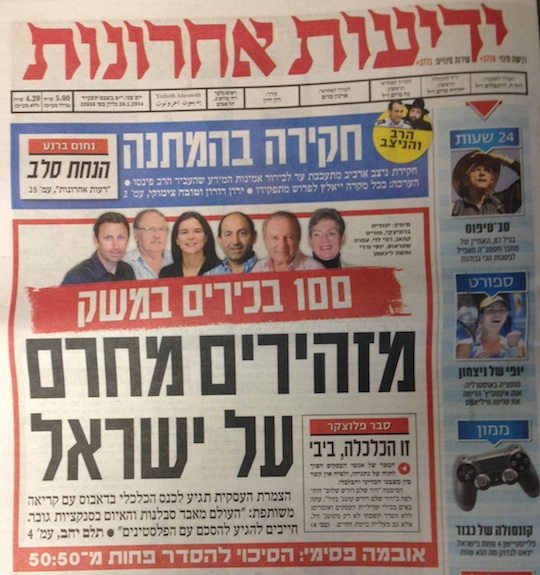 “100 leaders of the economy warn of boycott on Israel,” reads the lead headline in Monday’s Yedioth Ahronoth. The sub-headline includes the quote, “The world is losing its patience and the threat of sanctions is increasing. We must reach an agreement with the Palestinians.” The commentary next to it by star columnist Sever Plocker is titled, “It’s the economy, Bibi.”

Yedioth is almost as popular and influential an Israeli newspaper as Channel 2 is an Israeli TV news show. Between Channel 2’s Saturday night prime time wake-up call about the boycott and now this one, it’s likely that the Israeli public is beginning the process of waking up. The Israeli government – probably not so much. Which means the boycott will continue to grow, until some Israeli government in the indeterminate future is awakened by it, too.

The Yedioth story reports that some members of “Breaking the Impasse,” a recently formed group including the biggest names in Israeli and Palestinian business, took their warning to Netanyahu a week ago in a meeting ahead of Wednesday’s World Economic Forum in Davos. “Israel must reach a diplomatic solution – urgently,” a statement from the business leaders said. The group, led by Israeli high-tech partriarch Yossi Vardi and Munib al-Masri, long-time titan of the Palestinian economy, are to meet in Davos after the four-day conference to plan their next moves.

The stagnation in the peace process, which began with the Second Intifada in September 2000, couldn’t last forever. It appears to be stirring now, thanks to one thing: the spread of the boycott from protesters to professors to European governments, a dynamic that has come in response to that stagnation. And I expect the boycott movement to go through a major growth spurt very soon. The nine-month allotment for the Israeli-Palestinian talks runs out on April 29; my guess is that John Kerry is now looking for a way to cut his losses. Everyone understands that when Defense Minister Moshe Ya’alon was quoted last week in Yedioth  trashing Kerry and his peace mission, he was just echoing Netanyahu’s views.

No matter what Kerry or Obama say on the record about who’s to blame for the failure of the talks, everybody outside of Israel and the Republican Party will know that the guilty party is this country and its ultra-nationalist leadership. At that point the boycott movement will start to gather sympathizers not just from the international Left, but from Western liberals. And the Obama administration will have very little enthusiasm to go to bat for Bibi, Lieberman, Bennett and the settlers. And at some later point the Israeli public will elect a new leadership with a mandate to end the occupation. And then we’ll see …

But for right now, the back-to-back Channel 2 prime-time feature and Yedioth front-page story are the writing on the wall.

Related:
Boycott goes prime-time in Israel
The academic boycott of Israel: No easy answers
What can we learn from the Israel apartheid analogy?