At 16, Hamza Hamad has already experienced the worst of Israel’s occupation: arrests, home raids, demolitions, and a father in prison. Now he has become the youngest Palestinian to be put in administrative detention. 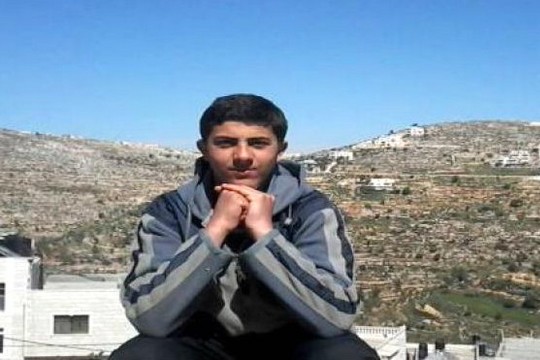 Sixteen-year-old Hamza Hamad from the West Bank village of Silwad was placed in administrative detention last week, making him the youngest administrative detainee in Israeli prison. Hamad was arrested in a raid on his home at the beginning of last week; after a short interrogation the GOC Central Command signed an administrative order that would indefinitely jail the 16 year old without trial for half a year.

Despite his young age, this is not the first time Hamad has been arrested by the Israeli army. At the end of August 2015, security forces raided his family’s home where he lives with his mother and two brothers. The army destroyed his computer and interrogated his 10-year-old brother. When the soldiers left, they took Hamza with them to the interrogation facility at Jerusalem’s Russian Compound. There he was interrogated for 22 straight days, for eight of which he was prevented from meeting with an attorney, and was released home without charges. A week ago, soldiers came back to take him — this time straight to Ofer Military Prison, with no real need for interrogation.

Hamza is the son of Moeed Hamad, who was sentenced to seven life sentences in 2003 for orchestrating terror attacks against Israelis in what was named “Operation Ein Yabrud.” Over the years, Israeli forces have punished the family through home demolitions and arresting their children.

Moeed Hamad published a book a number of years ago, including letters written to his children. This likely angered the Israeli authorities, who turned the house upside down. During that same raid, they took a number of computer game CDs, and confiscated the family members’ phones.

Following previous raids and arrests, the family claims that the IDF’s methods were being used to put pressure on and punish the father. The authorities even prevented Hamza from visiting his father in prison, despite the fact that he does not need permission to do so as a minor.

Administrative detention is an extreme measure meant to be adopted rarely and with moderation. Administrative detainees are held indefinitely without charge or trial — with out any way to defend themselves.

According to the Israel Prison Services, Israel is currently holding three Palestinian minors — Hamza and two 17 year olds from Jerusalem — in administrative detention. As of the end of January, Israel held 421 Palestinian minors in prison, out of whom only 135 have been formally sentenced.

The Shin Bet has yet to respond to the above claims. Its response will be added here if and when it is given.