The Zionist dream is disappearing due to the rise of the messianic Right. Jews who are worried must know there is an alternative: building a society based on equality and democracy.

The end of the Zionist era is upon us. Perhaps it is time to close this chapter in the history of the Jewish people. The Zionist movement has succeeded, and now it is time to take down the monster before it goes too far.

You, our Jewish cousins, established a state in the most unjust way possible. One cannot hide the Palestinian people or what they have gone through any longer. The state of shock following the Second World War and the founding of Israel has begun to lose its significance. When considering everything that successive Israeli governments have done to Palestinians — continuing occupation, the siege on Gaza, the spread of settlements, rising violence and racism — we simply cannot go on like this.

I must admit that I almost said goodbye to my dream of a Palestinian state with an Arab-Palestinian majority — one that could have been established here following the British Mandate. It was a dream state replaced by force with the State of Israel, which turned me and a million other Palestinians into a minority. It is clear to me that there are two peoples living in one holy land. One of them is my people, the indigenous people of this land. The other, our cousins, have been here for generations, the majority of whom came here from all corners of the globe.

The defeated Palestinians have reconciled themselves to the situation, and have acted with relative restraint toward the invaders and their army. The Palestinian Nakba dispersed my people, and despite the fact that my family members are now in refugee camps in Europe after they fled their original refugee camps in Syria, I believe that the vast majority of my people are willing to live alongside the Jewish people in a place where we are equal. On the basis of freedom, democracy, and equality.

I want you to understand how difficult this is — how much of it depends on dialoguing, forgiveness, seeking justice, and correcting past injustices. I believe, however, that this is truly possible. People have done this in the past, after bloody struggles in places such as South Africa, Ireland, and Bosnia.

Apartheid in the Republic of South Africa. A beach for whites only near the integrated fishing village of Kalk Bay, not far from Cape Town. January 1, 1970. (UN Photo/KM)

This is all very possible. We are only left with a question of will: has the time come for the Jews to part with their dream of a pure nation-state for the Jewish people? Hasn’t the time come to toss this racist theory of purity and Jewish supremacy into the dustbin of history?

The irony of the story of the Jewish people is that the Palestinians were not the ones who sabotaged the Zionist enterprise. It was the national-religious Jewish right wing that conquered the country you had always dreamed of building. If you hadn’t noticed, the liberal, Zionist, democratic Israel of yesterday — the one you dreamed of — no longer exists. Perhaps it no longer exists in your dreams as well. It hurts, I know.

But at this historical juncture, I want to propose that instead of fighting for a dream that will not come true, focus on being a free people in your land, and give up on the land of Zion and Jerusalem. You are on your way to becoming slaves to the national-religious movement. The future of this country is a religious totalitarian regime that doesn’t give a shit about you. So instead of mourning and crying over how “they took our country” — get it together and start looking for new partners for your struggle against persecution. 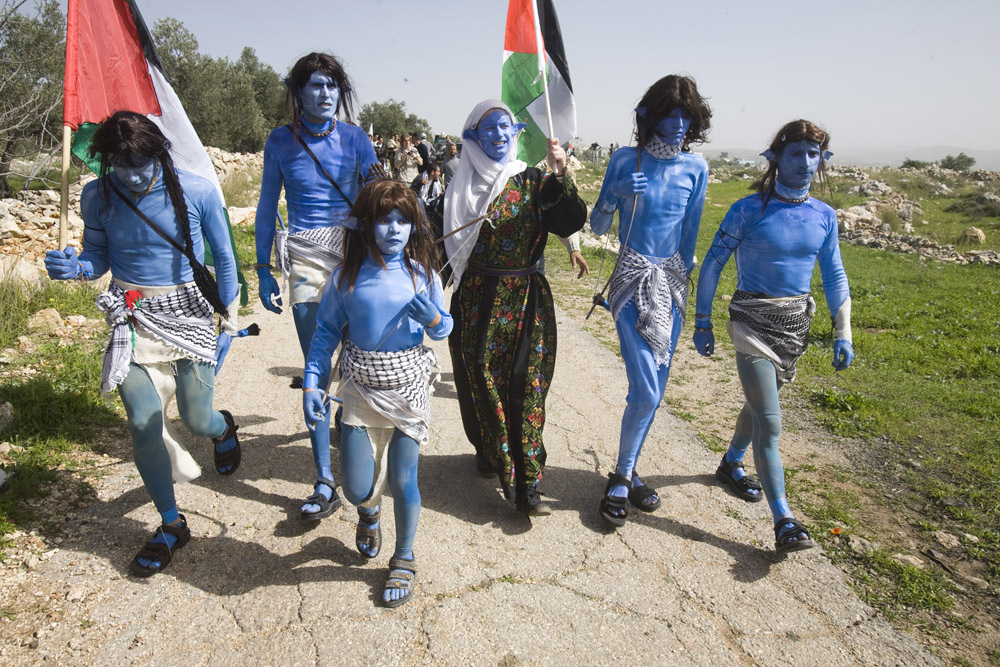 Palestinian and Israeli protesters dress up as characters from the film ‘Avatar’ during a demonstration against the wall in Bil’in. (photo: Oren Ziv/Activestills.org)

At this point, those who have understood that it is impossible to live in peace with the fictitious notion of “Jewish and democratic” must make the inevitable choice. It is clear to us what the Israeli Right wants: to build the Third Temple and a religious Jewish state. It is unclear what the Right has in store for the Palestinians, but let’s just say that the beginnings of a Jewish kingdom do not bode well for us, or for you either.

So I ask you, all the Israeli Jews who do not want war and a religious state. What do you really want?