What should have been a regular day at Tel Aviv University turned into a depressing reminder that when you’re Palestinian, you are automatically suspect in the eyes of the authorities. 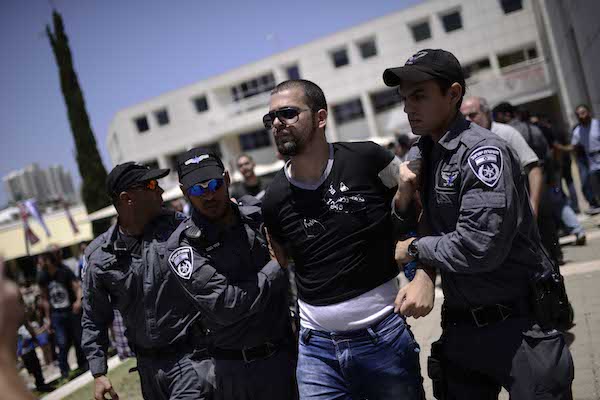 Israeli police detain a protester during a rally marking the anniversary of the Nakba, Tel Aviv University, May 20, 2015. (Tomer Neuberg/Flash90)

I never thought I’d find myself, one sunny afternoon, pressed against a police car on the grounds of Tel Aviv University, where I study and work, with a police officer clutching my hands tightly behind my back. I wasn’t in that situation because I’d taken part in a demonstration, but because I’d refused a demand from the university’s security staff to produce my ID while on campus.

On Tuesday, a few minutes before starting work at the university, I noticed a police car parked on the school grounds. An officer got out, accompanied by four university security staff, approached a man sitting on a bench nearby, and tried to arrest him. This is a rare, almost surreal sight at the university, given that it is supposed to have a level of autonomy that keeps the campus free of police involvement. As such, when I saw the police, I instinctively started filming them on my phone.

Almost immediately, a university security guard came and asked me why I was filming. I replied that it was my right to do so. Presumably feeling that his ego had been hurt, he asked me to identify myself. I refused. I also refused to identify myself to his supervisor and to the police officer, both of whom he’d brought over. (The university’s official guidelines, by the way, only require people to produce ID on entering the campus.)

I explained that I am an employee and a student at the university, and that they cannot treat me like this when I’ve done nothing wrong. The police officer claimed in response that I have to accede to his request, simply because he made it, and added that if I continued to refuse, I would be detained. I still didn’t identify myself, and was violently dragged over to the police car.

After that things developed quickly: students and staff arrived, one of the deans got involved, and I mentally prepared myself to get arrested for the first time in my life. A smart man once told me that if you haven’t experienced a false arrest, you can’t know what freedom is.

The police officer, who was waiting for backup, announced over his radio that he had arrested “a member of a minority who refused to identify himself.” The negotiations between the dean, the security staff and the police officer continued briefly; I started to feel uneasy and so produced my identity card, solely out of respect for the academic faculty and my lecturers. And that was the end of the affair — at least on the face of things. 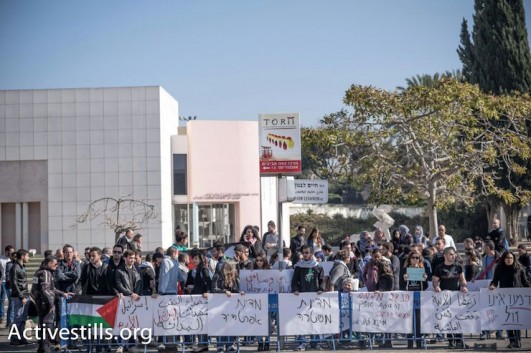 Palestinian citizens of Israel demonstrate at the entrance of Tel Aviv University against Israeli police violence toward Arab citizens, January 20, 2015. (Photo by Activestills.org)

I’m still thinking about something the police officer said to me — that if the dean hadn’t got involved, I’d be rotting in jail and he (the officer) could have already finished work. On this note, it’s important for me to address a few things.

I know that some will say I should have produced my ID card at the start and got it over with, and that some will ask, “Why the provocation?” But the issue is not one of ego, or my wanting to “pester” the security guards, whose work I respect and whose working conditions I am appalled at.

The issue is what must be suffered by members of Israel’s weaker populations — a Palestinian or an Ethiopian, for example — every time they encounter security forces. The racial biases going through someone’s head, especially that of a member of the authorities, when they see someone different — black, brown, bearded (or not) — trigger violent behavior against that same person, even more so if they’re holding a camera.

What were the university’s security guards and the police officer afraid of? Is a smartphone camera such a threat to their power? I certainly learned something from this incident: that law enforcement authorities are indeed frightened of the camera.

Another important factor is the centuries-old international tradition according to which universities are autonomous, in particular when it comes to self-policing. This tradition is supposed to prevent police officers from entering the campus, and it’s a principle that is respected by all academic institutions in Israel.

It saddens me that the university’s security staff, the police officer and even the university itself did not display even a minimum level of respect to this principle, and that it was so easy for them to accept the fact that I could have my freedom denied in the middle of the campus, for no reason at all.

In response to the incident, Tel Aviv University said that “the police were summoned to the campus following a theft. During the incident, Yaser Abu Areesha was asked to identify himself because he was present, and was feared to be collaborating with the suspect in the theft.

“Despite the request from the security supervisor and the police officer to identify himself, Abu Areesha refused to do so. Nonetheless, once faculty management representatives arrived on the scene and spoke with him, Abu Areesha agreed to identify himself as an employee of the university, following which the police officer decided to release him without submitting a complaint.”