The right-wing Israel crowd is on a mission to delegitimize every Palestinian activity that goes beyond silent submission to permanent foreign military rule.

Post-modern madness has Israelis very excited, for years now, about the notion that if Israel just “explains” its side of the matter, the world will come to its senses.

There is a deep and pervasive myth that Israel is hopelessly incompetent at communications. Israelis speak of Palestinian propaganda as a well-oiled machine, with tentacles in every news media, lobby groups in the halls of power and pressure groups controlling the minds of students and faculty in universities around the world. Many Israelis seem unaware that operating highly elaborate lobbies, media watchdogs and branding efforts – with generous funding and considerable sophistication – is a long-established Jewish activity. And it hasn’t saved Israel from a deteriorating global image.

Meanwhile, Israelis know that the Palestinian machine is a Svengali spinning lies into narratives that everybody believes. Palestinians’ clever use of film as a weapon exaggerates benign realities of an enlightened occupation by the most moral army into a Hollywood-produced image of hell. Right-wingers so thoroughly believe this that they have developed a nickname for the string of manipulative and manipulated video clips showing Israelis harming Palestinians: “Pallywood.” How to fight the scourge is a national obsession.

In the thick of the terrible escalation this weekend, an item on Israel’s Channel 10 claimed to explore the “stories behind” some of the most damaging videos that have made global rounds. The repulsive footage of Israeli border policemen beating a teenaged Palestinian-American while he is flattened and immobilized (a relative of the murdered youth Muhammed Abu Khdeir) is the very latest; David the “Nahlawi” is another; two weeks before that was  damning footage from Beitunia of soldiers shooting at demonstrators, some of them stone-throwers, resulting in two teenage deaths; before that the M16-whipping of a Danish activist, and the iconic Muhammed al-Dura affair, and so forth. Apparently these incidents are a purely a matter of image, with no connection to each other, only loosely tied to reality at all.

The Channel 10 story was actually about the “National-Zionist news agency” called “Tazpit” (Lookout), established to counter the images drawn from “partial, lying footage of what goes on in Judea and Samaria…” by the “enemies of Zionism,” as if Zionism is a universal value. The organization itself doesn’t say this on its English website, where it rather farcically tries to portray itself as a news agency. That text comes from the Moskowitz Prize for Zionism awarded to Tazpit in 2013, named for Irving Moskowitz, the American stalwart settlement funder. However, the Hebrew version is quite open about the agenda of transforming Israel’s negative image “because our information is not getting out…We at Tazpit will change that!” 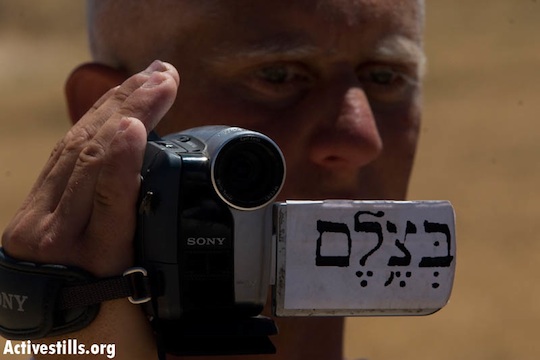 This is one example of the severe problem with the way Israel thinks about the conflict – or doesn’t:

First, the meta-conversation is getting out of hand. The multi-layered system of non-transparent backing for an organization that lives in a world of prizes given for nurturing more image-making is an unforgivable distraction from the events themselves.

Second, the right-wing Israel crowd is on a mission to delegitimize every Palestinian activity other than mute submission to permanent stateless military rule. Violence against civilians of course is not legitimate. But it is quixotic to condemn violence against military targets in a military conflict, short of outlawing war altogether, as my grandmother has suggested of late. Civil resistance is also considered aggression: popular protests are condemned because of stone-throwing spoilers. Civil action such as BDS and the UN diplomacy are written off as attempts to delegitimize Israel rather than genuine protests of its policy.

Now even the most basic response to oppression – the attempt to tell the world, raise awareness, communicate suffering in order to seek help for ending it – that too is evidence of Palestinian incitement and lies.

The truth is that for mainstream Israel, there is no legitimate way for Palestinians to protest its policies.

A third problem is that Israel’s rejection of all Palestinian activity is so automatic that it extends to pretty much everything – even pro-Israel sentiments. So when Mahmoud Abbas gives an unprecedented recognition of the Holocaust, Israel scoffs. When Mahmoud Abbas condemns the attack against the three Israeli civilian youth, in Arabic, to an Arab audience, Israel shrugs.

The fourth and final issue should be obvious but apparently it is not. I have certainly written it before, so apologies to readers.

We campaign professionals know the power of images. Public opinion researchers, or at least those worth the job title, know the limit of that power: people are not stupid. The Cold War is over and in the long term, on major ongoing issues, I doubt that masses can be made to believe falsehoods that have no basis in fact.

That doesn’t mean every fact is true, of course. Each side’s media is full of one-sided representation, mistakes or sometimes even purposeful untruths. Nor do facts that serve one side negate all those of the other side. Admitting that Tarek Abu Khdeir was brutally beaten by Israeli authorities does not negate the rocks thrown at police in East Jerusalem or that rockets were fired from Gaza into civilian areas of Israel.

Pictures are worth a thousand words, but one truth is worth a thousand pictures. No one picture will change the fact that Israel is waging a war of occupation on the Palestinian people and it’s a real war, not a war of images.