The furor surrounding Breaking the Silence and the reflexive defense of the IDF both miss the fundamental point that any institution with violence at its core is inherently ethically compromised, and ultimately, an army is trained to fight. 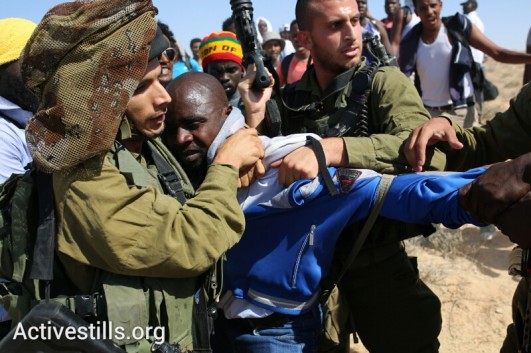 Israeli soldiers hold back an African asylum seeker during the march to the border with Egypt. (photo: Yotam Ronen/Activestills.org)

A raw nerve has been touched in Israel over the last few weeks. Far right-wing group Im Tirzu publicly accused Breaking the Silence members of being foreign “implants,” and public outrage was directed against President Rivlin for appearing at the same conference as the anti-occupation group of IDF veterans. The result is that Breaking the Silence is being portrayed as an enemy of the state.

(Rivlin himself has suffered an enormous backlash simply for appearing at the same conference Breaking the Silence did, despite not actually sharing the stage with them and releasing a statement indirectly criticizing the organization at the same time.)

The army is everything in Israel: its foundation, its heart, its history, its future and its compass — both moral and directional. For anyone to question the army’s actions and motives is the most wounding criticism anyone can direct at Israel, because it strikes at the country’s soul. The IDF is the most revered of Israel’s many sacred cows.

So in the dominant Israeli political and public discourse, Breaking the Silence are the ultimate traitors. In their role as combat soldiers, whether former or current, they are supposed to represent the best of Israel and the pinnacle of the country’s means of self defense, with the supposed independence that grants.

In the eyes of Israelis, therefore, these soldiers’ criticisms are the country eating itself, which is perceived as an enormous threat. If we are surrounded by so many enemies, the logic goes, how are we supposed to survive if we begin rotting from within?

A recent documentary, Censored Voices, contained long-buried recorded testimonies from IDF soldiers who had fought in 1967’s Six-Day War, which were taped a matter of days after the fighting stopped. The film, as might be expected, pokes all sorts of holes in the glowing mythologies of that war — its unfailing morality from start to finish; the blanket religious ecstasy; the impeccable behavior of soldiers in the “most moral army in the world.” 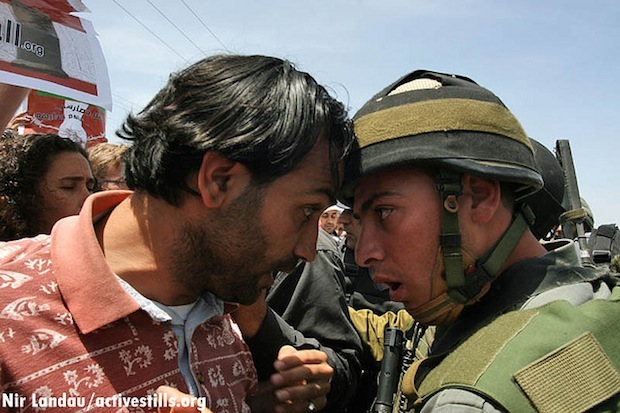 Confrontation between Palestinian and IDF soldier in Gush Etzion, 2007 (Activestills)

The interviewees understood the explosiveness of what they were saying and so did the government at the time — only 30 percent of the recorded material was approved by the military censor for release to the public. Listening to the now-fully released footage in 2015, one can hear the same motifs that repeatedly appear in Breaking the Silence testimonies: from orders to shoot anything that moved to admissions of executing unarmed civilians. One veteran, too, acknowledged that to speak of such things today would see one labeled a traitor.

Yet what primarily links the testimonies of nearly 50 years ago to those today are their subtext of the corrupting power of violence and the fact that involvement in violence — no matter how just one believes the cause to be — will inevitably leave one ethically compromised. Violence is at once devastatingly contagious and irrevocably transformative to both perpetrator and victim. It blunts morals, confuses the senses and can be dangerously addictive to both watch and participate in. We’re in thrall to it at the same time as it poisons us, and it inevitably rewires both our individual and collective consciousness.

At its heart, an army is a violent institution. Its trains its members to fight. Whether those fights are offensive or defensive, whether they are seemingly unavoidable or not, does not change the fact that violence is at the core of any military’s role. By extension, an army cannot help but be a dehumanizing apparatus in which people become units or targets, no matter how honest the intentions of individual members of that army may be. To speak of a moral army, then, is to create an impossible equation.

When you have an occupying army, its influence is even more malign. Making one set of human beings the masters of another group is a complete violation of human equality and brings an entire matrix of structural violence to bear on every section of society. It normalizes violence, making it a matter of administration, paperwork and rubber stamps. And it is profoundly brutalizing in both directions; while it may be folly to draw moral equivalence between the occupied and occupying populations, violence knows no such distinctions. It simply taints everything it touches and its corrupting effect is depressingly predictable. 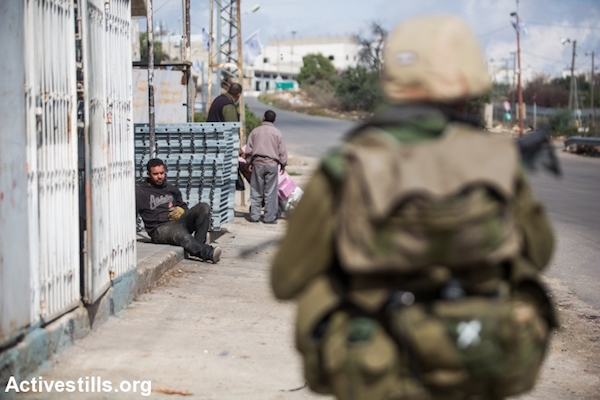 In this sense, the West Bank is like the scene of a giant Stanford Prison Experiment: there, we learn not that “any random human being is capable of descending into sadism and tyranny … [but] that certain institutions and environments demand those behaviors,” as a recent critique of the experiment put it.

And the violence in Israel-Palestine is not only institutionalized, it is woven into the very fabric of society and politics here, by dint of the army’s central role in the country. Coupled with the kind of overt, casual racism that characterizes the public discourse here, it is small wonder that people have trouble contending with how fundamental the wrongs in Israel-Palestine are.

Israeli society has never been good at looking itself in the eye, and nowhere is that more clearly revealed than in the blind, indignant rage currently being directed at Breaking the Silence. To point to the ruinous impact of violence on the Palestinians is treason, while suggesting that it is corrupting Israeli-Jewish society is blasphemy.

The ongoing debates around equality, freedom of speech and the Israeli government’s growing constitutional intolerance of human rights NGOs and their activities are essential and urgent. But we also need to have an even more basic discussion about how to scale down the violence in a society where going to the army is as normative as going to school, and about how to move away from having a military institution define the character and ideals of the state. There are no easy steps or answers to these problems, but finding a way to end the occupation would certainly be a good start.