Israel is already carrying out Bennett’s annexation plan, only without the formal annexation part. The West Bank is a very different place than it was 10 years ago. It will be even more different five or 10 years from now.

The indispensable Amira Hass reported this morning about an Israeli plan to push thousands of Palestinian-Bedouin into a new town it plans to build in the Jordan Valley. The Jordan Valley is one of three areas in which Israel is trying to relocate Bedouin into designated areas or towns; the others are south of Hebron and east of Jerusalem.

Netanyahu’s government treats all “state land” in the West Bank as if it already belongs to Israel, as opposed to land under dispute. For Israel it’s actually better than annexed land: projects that would take an arduously long time to plan and execute under the civilian planning system in Israel proper can materialize in a matter of months under the IDF military regime in the West Bank.

The government has also been transferring Palestinian municipal — and even private — land into its own possession and control. Despite commitments to several American administrations not to build new settlements, the Israeli government has been legalizing outposts for several years now. It even started construction on the first “official” new settlement since the Oslo accords. Most recently, the government appropriated 1,000 acres near Bethlehem for a new settlement. Altogether, 2013 was a record-setting year in settlement construction.

There will be no Palestinian state in the foreseeable future. Israel will not allow it, and the political circumstances that would otherwise force it to reconsider its position simply don’t exist. Instead, Israel is maintaining the status quo of occupation in the Palestinian territories. But the term is misleading. There is nothing static about the status quo. Israel constantly strengthens its control over the West Bank — and while doing so, it creates a new reality on the ground. 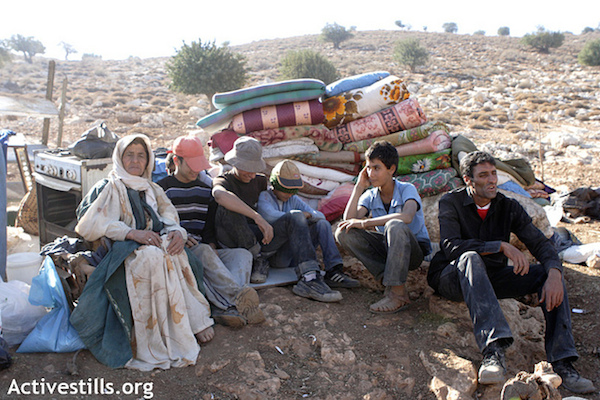 A Palestinian Bedouin family after their Jordan Valley home was demolished by Israeli army forces. (File photo by Anne Paq/Activestills.org)

The effort in the Jordan Valley is especially telling. Netanyahu’s government made the Israeli presence in the Jordan Valley a key demand in its negotiations with Secretary of State Kerry earlier this year. In fact, it was one of the key hurdles that prevented the American administration from presenting a framework for a final status agreement.

Since the Gaza war and the shift of international attention to radical Islamic militias in Syria and Iraq, Israel’s desire to hold onto the Jordan Valley has only grown. The effort to create a contiguous Jewish population in the area and to clear the land of Palestinians can only be understood as part of a long-term project that would isolate the rest of the West Bank from Jordan and as consequence – from the rest of the world.

The logic in the government’s other measures isn’t hard to find, either. Its land appropriation near Bethlehem and measures against Palestinian rural communities are aimed at pushing the Palestinian population into several disconnected urban areas, while maintaining a contiguous Israeli presence around and across the West Bank.

Settler leader Naftali Bennett long ago proposed that Israel annex Area C – roughly 60 percent of the West Bank that is under full Israeli administrative and military control – giving full civil rights to the roughly 100,000 Palestinians living there. The other millions would live under some form of “enhanced autonomy” in the remaining 40 percent of the land, which would be so fragmented and non-contiguous that it looks like an archipelago.

I don’t think Israel will annex Area C. The international fallout would be too great. More importantly, forced relocation, advancing zoning plans and creating new settlements is actually much easier when the land is under military sovereignty — especially in comparison to the bureaucratic difficulties of civil control west of the Green Line, not to mention the greater degree of transparency.

Israel is already carrying out Bennett’s plan, only without the formal annexation part. The West Bank is a very different place than it was 10 years ago. It will be even more different five or 10 years from now.

In the past 20 years or so the international community’s strategy toward the occupation was to try and slow down Israeli measures in the hope that the establishment of a Palestinian state would actually reverse them. This school of thought has failed miserably.

Israel’s ability to find — and use — creative legal and political tools that allow it to pursue its territorial ambitions is constantly improving; efforts to contain those ambitions, meanwhile, have completely disintegrated. Every few years, Israel demands that new “facts on the ground” be recognized as a starting point for any negotiation; the international community then has no option but to discuss these demands, and at times, even accept them as the new norm.

It is now clear that the current road will not lead to the creation of a viable Palestinian state. A new approach is required if the Palestinian population is ever going to gain its rights, freedoms and at least some of its assets.