‘You were supposed to be optimistic, you were supposed to give us hope. Instead you are only proposing despair.’ A letter to Israel’s best known Hebrew-language Palestinian author, columnist and entertainer, who after the racism and violence of recent weeks wrote that he’s lost hope in coexistence. 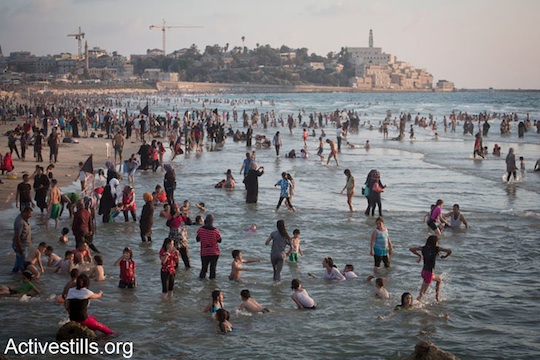 Palestinians from the West Bank enjoy the Mediterranean Sea on the last day of the Eid al-Fitr holiday, Tel Aviv, August 11, 2013. (Activestills.org)

You broke my heart when you cried out in your weekly Haaretz column. You’ve made the tears trickle down of their own accord. You made me want to escape out of my body and run. This is not how I imagined our first meeting. In my mind I saw a more optimistic encounter in which I described your great and scorching columns to you, those that left a spark of hope in me.

After I read your column I was not afraid to step out of my house. I relied upon my Ashkenazi appearance to finally be of good use. I escaped to where I always do when the world is too suffocating, to a viewpoint that looks over the sea from the old city of Jaffa.

On my way I passed through the alleys of the flea market, a place that has become into a major hit among the trendy middle-class people of Tel Aviv and the area. I saw a sign there greeting the Muslims for the month of the Ramadan. It was hung above one of the Arab coffee shops, perhaps the only Arab coffee shop there. Nice.

I searched for spelling or grammar typos in the greeting’s text and could not find any. Even more surprising and wonderful! I must have gotten used to embarrassing and neglectful mistakes in Arabic signs, like those where the dot is placed over the wrong alphabetical letter and the sign turns into a joke, and not to mention translations of street signs, which I always check the Hebrew to make sure the Arabic version contains no lies.

I kept walking, gradually noticing that there are almost no Arabs around. I thought to myself: perhaps it is because the time for  Iftar, the meal that breaks the fast, is approaching? But then I recalled that even in other months— i.e., not Ramadan, there are rarely any Palestinians in the entertainment joints that have re-taken Jaffa in the past decade. Then I recalled once more that I meant to escape from thought, so I left it at that.

Meanwhile, I kept walking and saw a restaurant with three African guys. Something didn’t add up for a moment. Have I ever seen them outside the kitchen, not taking care of our needs and actually sitting at a table and being treated as ordinary customers? Yet again, I preferred not to sink into sad thoughts about racism that I was walking to escape from that day, to escape all the calls of racism with which people have meticulously decorated social networks and news websites.

War machines between Jaffa and Gaza

I kept walking. In the background, the Muezzin begins to read a chapter of the Quran. It’s a custom during the month of  Ramadan that seems to me to be mental preparation in the last minutes before the end of the fast: The women and mothers are busy with final touches to the feast they have been working on for at least half the day. For the men on the other hand, it is a distressing period as they await near the delicacy piled table. They don’t even bother to set the table even if only the mother fasts. Again, I remembered that I didn’t escape in order to think about patriarchal relations that reinforce themselves during the month of the Ramadan, or the religious coercion against the “kufers,” us, who don’t fast.

Finally I reach the hill that looks over the sea. The Hebrew and Arabic start to fade in the background and for a moment, the Jewish-Arab scene looks like a harmoniously conducted game like no other. I don’t hear any word about the events of the past two weeks.

The sun is going down. The Hebrew and Arabic were replaced by voices of tourists. Gradually, Russian, Italian and English become the only sounds in my ears. Such a moment “abroad,” only 10 minutes away from my house. A perfect moment!

But then the world became cruel again. A military helicopter broke the stream of Italian conversation that was playing in my ears. I looked and speculated where it was going. Is it one of those helicopters that fly to drop bombs on Gaza? Is it reasonable that they will simply fly up there, so easily recognized from the skies of Tel Aviv? It always seemed like a demon, far far away and only present in the news.

Ugh! Again with these thoughts. This time I decide to listen only to the notes of the street player’s saxophone and to give him a few shekels in gratitude, of the heightened sense of overseas travel that he bestowed upon me, and for reminding me how much better the world could be. A world without frightening people who roam the streets to tell heroic stories of how they beat up a Palestinian worker or women wearing hijabs, and without people who keep looking for the next child to burn alive.

I was thinking of a world without oppression and supremacy of one nation over another, a world where we, the Palestinians, also know how to forgive and let go of all the years of oppression. A world where we’re not asked to show gratitude for a piece of paper within a blue cover (our identity card), a world where the hardships of the weak are not used to recruit traitors. A world where the generation of young Palestinians will be proud of its identity and language, a generation that can attend to better schooling, education and values. A generation that is benefited by the world and walks with their chins held high, filled with pride and “cara’me” (dignity) that was taken away from the previous generations.

A world in which Jews who are preaching to the rest of the world to uphold better values of humanity actually stand on the lookout, making sure no people or nation will endure the most terrible things of all that their grandparents endured, a world where they know how to talk about a social and economic protest without detaching it from the occupation and the broader political dimensions, a world where they will feel safe without being persecuted for their religion. A world where the police are entrusted with the personal safety of all citizens and do not distinguish between one murder and the other!

A world where people do not simply believe governments or TV channels, and who know how to put their shows and presentations into proportion. A world without Class A and Class B citizens, special numbers on passports. (Yes, I know that a series of numbers with an asterisk that starts with ‘4’ from the left, is code for an unmarried Arab woman who is considered suspicious because she is under 30 years of age and flying alone.) I imagine a world without borders or checkpoints, where no one wishes death upon another, where people empathize with the suffering of the other nation and succeed in seeing some humanity in them. A world with enough space for all religions, without any of them being more correct or right, a world where people cry from the pain of a neighboring nation.

So, in contrast to you, Sayed, I decided to fight and keep dreaming of a more optimistic world where one can think differently. When it comes true, please do not stay in the U.S.!

Maisalon Dallashi is a sociologist and a researcher at Tel Aviv University. She studies the politics of the language and translation in the asymmetric relations between Jews and Arabs. In the past, she hosted meetings between Jewish and Palestinian youth and wrote in the Arab press about intra-community issues such as the employment of women, and the nightlife of youth in the Arab community.

Translated from Hebrew by Hadas Leonov. Read this post in Hebrew on Local Call.

Related:
A frightening new era of Jewish-Arab relations in Israel
Jews and Palestinians pay the price for latest wave of violence