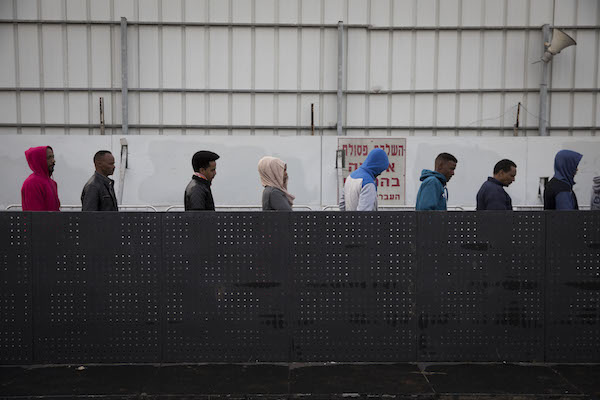 Two hundred of them arrived in the early morning hours on Sunday, gathering in an industrial area in the mostly ultra-Orthodox city of Bnei Brak, just outside of Tel Aviv. They arrived on foot from the main road, or by costly taxis. Now, they stand in a parking lot, amidst parked trucks and piles of garbage. They are here, outside the Interior Ministry’s main office, to submit asylum requests or renew their visas, which the Israeli government requires them to do every two months.

At the Interior Ministry’s office on Salemeh Street in south Tel Aviv, African asylum seekers often wait for days in long lines, overnight and in the cold rain, to enter the building. But here in Bnei Brak, most of the refugees do not spend the night.

An Eritrean tea vendor volunteers to hand out numbers that she writes on pieces of paper, which she gives to the asylum seekers at 8 a.m. They form a line according to these numbers. Once they have reached the end of this line, they receive another number, this time for the Interior Ministry. Then, inside the office, there are two lines: one for filing asylum claims (though Israel has said claims filed after January will not be treated as reason to delay deportation), and one for renewing visas.

It is the first day that Eritrean and Sudanese asylum seekers have been issued deportation notices — letters instructing them to leave the country within two months or face indefinite detention in the Saharonim prison. 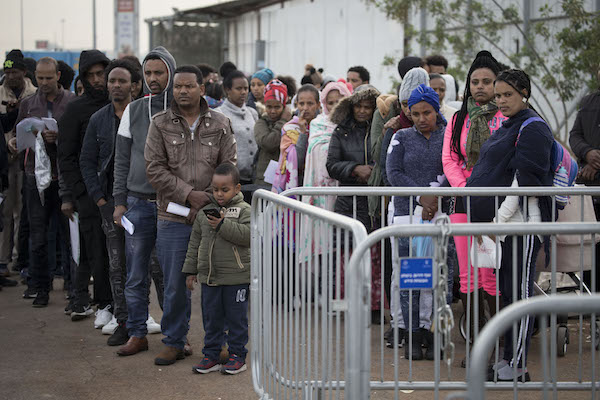 The Israeli government announced in early January that the African asylum seekers had three months to leave the country. Those who remain after the three months will face a choice: deportation to an unnamed third country, presumed to be Rwanda, or indefinite detention in Israel. Beginning in April, Israel will also gradually decrease the departure grant — currently $3,500 — allotted to asylum seekers who opt to leave the country.

Rwandan officials have repeatedly denied the existence of any secret agreement with Israel, under which their country accepts asylum seekers. Yet the deportations have already begun; Israel’s Population and Immigration Authority is reportedly offering a bonus of roughly $9,000 to high-school-educated citizens willing to participate in the deportation operations.

In contrast to the Interior Ministry’s Salameh office, things go relatively smoothly here. After an hour or so, the first asylum seekers exit the office holding their deportation notices. 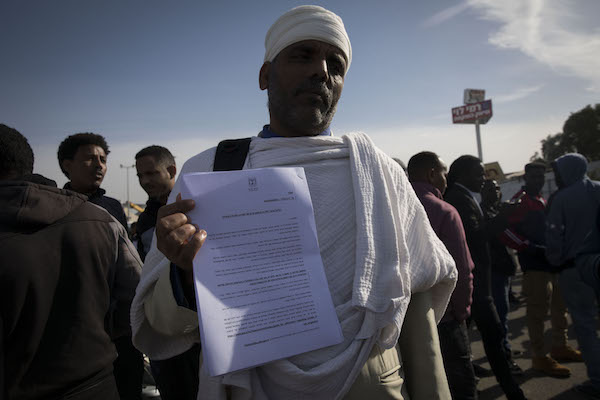 An asylum seeker holds the deportation notice issued to him by the Interior Ministry. February 4, 2018. (Oren Ziv/Activestills.org)

“They told me to go to a third country,” says Solomon, an Eritrean refugee and one of the first to exit the Interior Ministry’s office. “I won’t go. I’ll go to jail. It’s a lost cause.”

“I came to Israel after 12 years as a soldier in the Eritrean army,” he adds. “I’ll go to jail, I won’t return to Eritrea and not to Rwanda. There are problems in Eritrea and what is there for me in Rwanda?”

“I do not want to go to Uganda or Rwanda because I am not Ugandan or Rwandan,” Michael, an Eritrean asylum seeker says. “Many went there and I heard from them that the situation is bad there. I’m afraid to go, I’m not ready for them to deport me there.”

“I’ve been here for seven years.” Michael continues. “I fled Eritrea because the government there is a dictatorship there and I can’t go back. I’ve already spent a year in jail at Holot. I don’t understand why I have to go back.” Holot is a desert detention facility near the Egyptian border built specifically to hold the African asylum seekers.

Some of the asylum seekers who exit the office say they were told explicitly told they’d be sent to Rwanda or Uganda, while others say they were told only of an unnamed third country. Many of the asylum seekers show that their deportation notices had been stamped with the words “refused to sign”; they had refused to sign the forms ordering them to leave. 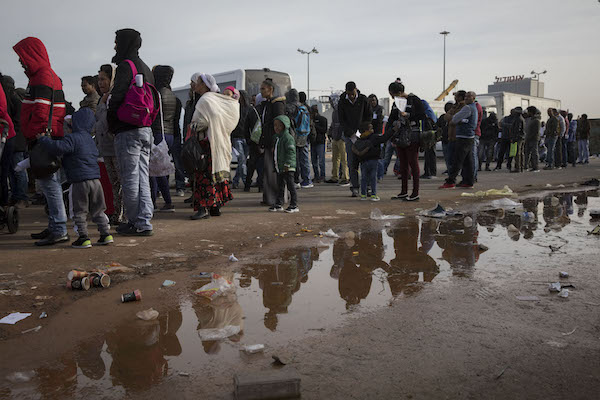 Testimonies of Eritrean refugees sent to Rwanda between 2014 and 2016 under the Israeli government’s “voluntary departure” program paint a grim picture of what awaits those who leave: abuse, extortion, humiliation, human trafficking, rape, robbery, and other forms of violence.

Contrary to the Israeli government’s claims that asylum seekers will be granted some form of legal status upon their arrival in Rwanda, asylum seekers say they were denied formal status in Rwanda and trafficked into Uganda. From there, they faced the choice of returning to Eritrea or making the dangerous journey to Europe. They all chose the latter.

The Eritrean asylum seekers, all of whom survived crossing the Mediterranean from Libya to Europe and were recognized as refugees in Germany or the Netherlands, warned their fellow asylum seekers still in Israel: “Israeli prison is better than dying on the way.”

Prime Minister Benjamin Netanyahu, bucking the growing public protests against the deportation plan, has claimed that the African country presumed to be Rwanda is considered by the UN “to be one of the safest in Africa.” Netanyahu also called the campaign to stop the deportations “baseless and absurd.”

As the asylum seekers were lining up in the trash-strewn parking lot to receive their deportation notices on Sunday morning, Netanyahu told ministers from his Likud party that “George Soros is behind the campaign against the deportation of the infiltrators,” using the Israeli government and media’s derogatory term for the refugees.

There are roughly 38,000 Eritrean and Darfuri asylum seekers living in Israel. The Israeli government has refused to process and accept the overwhelming majority of African asylum seeker claims. To date, Israel has recognized only one Sudanese man and 10 Eritreans as refugees. Only 15,000 asylum seekers have submitted requests for refugee status, due to the government’s lack of a clear asylum policy and failure to make information available to asylum seeker communities. Just 7,000 of those 15,000 requests have been reviewed.