The Gaza war should be seen as part of Israel’s overall strategy, which aims to maintain the current status quo in the Palestinian Territories.

One of the Israeli Right’s greatest political achievements was convincing the public that “we tried the Left’s ideas, and they failed.” Some even say that the current reality is the outcome of “the Left’s ideas.”

Naturally, this claim comfortably avoids the responsibility that the Right had in torpedoing any attempt for peaceful reconciliation, from 1987’s London Accord to Netanyahu’s unilateral decision in 1996 to stop implementing Oslo. (For some reason, the video in which Netanyahu boasted of killing Oslo and manipulating the Clinton administration didn’t leave the kind of impression one would expect.) Oslo itself was as far as one can get from a genuine two-state solution; it did not include the evacuation of a single settlement or the transfer of one square yard to full Palestinian sovereignty.

But these are the kind of historical debates in which nearly everything has been said. The fact is that we have been living in the age of the Right for many years now, and right-wing ideas – from Sharon’s disengagement to Netanyahu’s status quo – are the ones that shape reality on the ground.

All Israeli prime ministers from 2001 onward originally came from the Likud. Despite all sorts of “revelations” they experienced with regard to the Palestinian issue, and despite the new parties they formed, broke off from or returned to, none of them took active measures on the ground that were meant to lead to a fair compromise with the Palestinians. All they did was take several elements from the two-state solution and incorporate them into the old right-wing approach: the Iron Wall, military power, colonization, maximum land and minimum Arabs.

This is how Olmert’s unilateral withdrawal plan was born (and floated again recently by Michael Oren), along with Netanyhau’s “economic peace,” Bennett’s “Stability Initiative” or the far right’s absurd “Israeli Initiative.” All of those are variations on the same theme, which most of the time doesn’t even get its own name, yet remains the blueprint for Israeli policies.

The Gaza disengagement in 2005, a crucial moment which led to the current state of affairs, was the opposite of compromise: its stated goal was the prevention of a Palestinian State. The drama surrounding the evacuation of some 9,000 people shouldn’t obscure the fact that the disengagement was a status quo-oriented idea – more a rearrangement than a disengagement – and the debate surrounding it remained within the right wing, between the radical right and the more pragmatic conservatives. 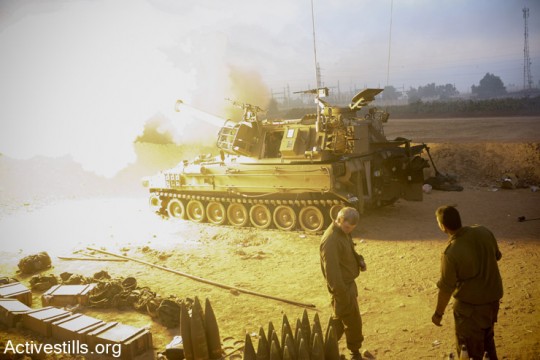 Netanyahu is the longest serving prime minister since David Ben-Gurion. Some people accuse him of lacking a strategy, but that is a shallow assessment. Netanyahu has been carrying out his strategy for years now. The failure of the peace talks and the war in Gaza are part of the same game, which is about maintaining the current status quo and doing so by force, if necessary.

Netanyahu’s approach is consistent. The conflict is for him a zero-sum game, and therefore one need not move beyond “a modified status quo.” One should use the regional and international system to search for ad-hoc coalitions, rather than rely on long-term relationships and agreements. One should try to avoid using military force, yet still prefer it to concessions; when decision time comes, the choice is clear. One should also continue to colonize land, but at a pace that takes geopolitical circumstances into account.

These ideas now represent the Israeli mainstream. Save for the issue of settlements, the differences between Labor’s Herzog, Livni, Lapid, Netanyahu and Liberman are minor. You hear the same thinking echoed by Israeli think tanks, op-ed pages and conferences. It is ironic that Israel accused Palestinians of a “unilateral move” when they tried to take their statehood bid to the United Nations (!), when unilateralism is at the heart of Israeli thinking.

Israel has been implementing these ideas for years, and the results are the only ones possible: brief periods of peace and prosperity (for Israelis) interrupted by periodic violent escalations. Things couldn’t be clearer. What we are witnessing in Israel these days is the “solution” – the alternative to both two states and one state.

The decision to try end the military operation unilaterally is particularly telling. For the government, the next escalation is always preferable to handing the adversary any form of achievement, while the war’s goal is to return the situation to how it was before the bombing started.

The current moment – when dozens are killed daily (most of them Palestinian civilians), when Israel becomes more and more isolated and when all policy choices are bad – is the direct outcome of the status quo strategy. This is when the real cost of the status quo becomes clear, rather than during the sunny intervals between wars. Only this time it is too late to go back. At every crossroad, Netanyahu doubles down on his bad bets, and the entire nation joins him willingly.

Related:
Israel has alternatives to this war
Why do Palestinians continue to support Hamas despite such devastating losses?
This is a war of choice. Netanyahu’s choice