In its invasion of the city, the army has not shied away from using live fire, blowing up the doors of homes and shops and maintaining a closure on thousands of people. The goal? Demonstrating its invincible power.

Nour al-Kawasma, an eight-year-old resident of Hebron, will never forget how Israeli forces suddenly declared war on his home. The young boy is still hospitalized with a head wound, days after Israeli soldiers detonated the front door of his house.

Akram al-Kawasma, Nour’s father, still carries an expression of bewilderment on his face. Nour remains in the hospital while his older brother, who was arrested during the raid, sits in jail. 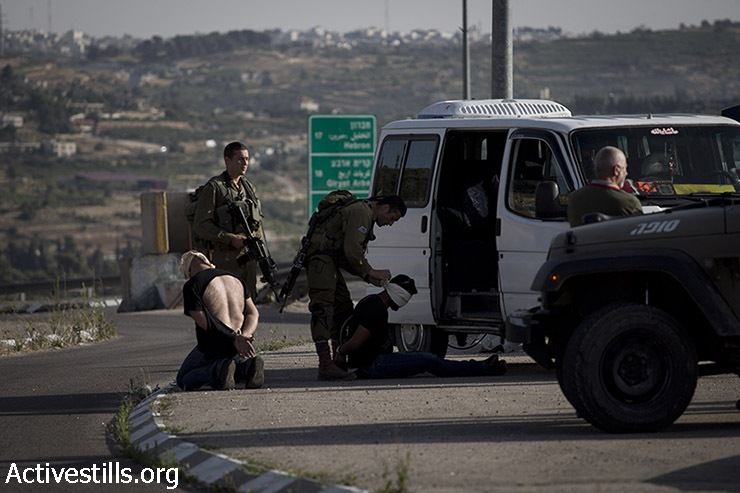 The story, as Akram tells it, began when he noticed soldiers nearing the entrance of his apartment. The area was full of soldiers carrying out house-to-house searches. This is what he told me:

I expected one of them to knock on the door, but all of a sudden there was a huge explosion, I had no idea why, and the soldiers started yelling: ‘Get out of the house!’

Just then, my son Nour was wounded by shrapnel from the explosion, and I didn’t know what to do. He was bleeding as the soldiers tried to enter, and after the door opened I told them that my son was wounded and needed an ambulance. But they did not listen because they wanted to arrest my oldest son, and that’s why they left my youngest bleeding in his mother’s arms. When my older son arrived an hour later, they took him by force, blindfolded him and threw him on the ground.

Nour, still bleeding, remained in his mother’s arms, while the soldiers prevented the ambulance from reaching the house. The soldiers shot at the Palestinian ambulance, a first aid crew, journalists and neighbors to prevent them from coming near. Only when the Israeli army’s ambulance arrived did my son finally receive treatment. He almost died because of the long delay.

Photos of the week: After kidnapping, West Bank cities under lockdown

When Akram returned to his apartment, he found everything in shambles. All the furniture had been either destroyed, torn or broken. “Couldn’t they have just entered and searched quietly?” he asks. “Why blow things up and destroy? And what did my son Nour do to deserve to be wounded and hospitalized? What sin did my sons and my nephews and neighbors commit that they deserve to suffer such emotional traumas because of the explosion and behavior of the soldiers?”

What happened to the al-Kawasma family repeated itself dozens of times throughout the search operations and raids carried by Israeli forces, which are accompanied by extremely violent actions toward the residents, journalists, first aid crews and the civil defense. The goal is always to show the invincible power of the occupation army.

Sounds of explosions are common in Hebron these days. This is not because the city is under bombardment, but because soldiers have been destroying security cameras belonging to shop owners, which were installed as a means to deter thieves. The soldiers don’t ask the owners for their their cameras, but instead confiscate them and blow up the entrances to their shops.

For the soldiers, the damage they are causing to civilians with these explosions, and the trauma they are causing to children and their families, is irrelevant. What matters is presenting an image to the settlers and the Israeli right wing that tells them the army is doing everything it can to find the three kidnapped Israelis. 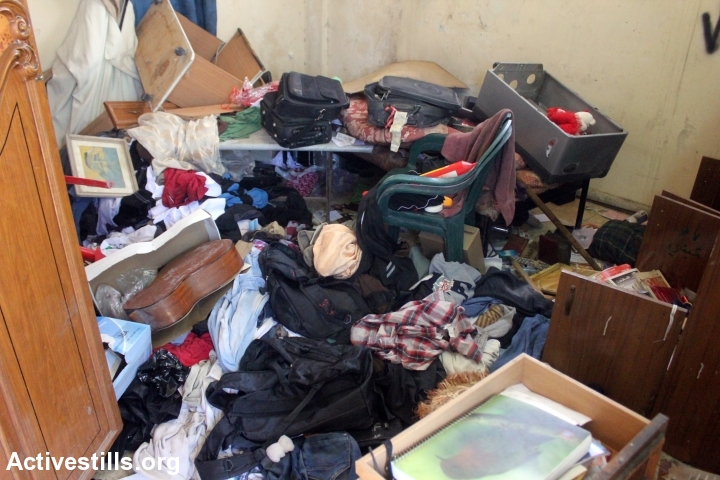 The aftermath of a raid on a Palestinian home in Balata refugee camp. (Activestills.org)

During these operations, the soldiers clash with the residents and the younger ones throwing stones. In the past, the army would respond with rubber bullets, stun grenades and tear gas. But his time the soldiers are firing live bullets at the boys. This means there will be more fatalities in the coming days. But the number of victims doesn’t matter — Benjamin Netanyahu and Defense Minister Moshe Ya’alon are interested in promoting the image of the army delivering a tough response.

Another version of the tough image is that of the soldier preventing people from crossing checkpoints, as well as putting all the residents of Hebron under collective punishment, regardless of their political leanings. What matters is that they are Palestinians and it is possible to prevent them from crossing checkpoints, to confiscate their permits and to prevent more than 700 of them from crossing for no reason other than the fact that they are residents of Hebron — the place where traces of the three missing Israelis are believed to be.

Collective punishment won’t help the army locate the missing Israelis. But it will fulfill the purpose of those meting out the punishment, which is to promote an image of Israeli military strength.

Netanyahu wants to convince his public that he can return the missing Israelis and that he is a strong leader, not only because he wants a strong home front, but also in order to protect his governing coalition and remind voters that he’s tough when the time comes to campaign for re-election. He wants to remain prime minister no matter what. He doesn’t care who is harmed, who experiences grief, who loses their children in this struggle for which they have given everything.

Akram Natsheh is a Palestinian journalist from Hebron. Read this post in Hebrew on Local Call.