The annual March of Return brought approximately 7,000 people to the destroyed village of Khubeizy on Israel’s Independence Day. The march, which went through village lands and debris, now a national park, ended with a rally in which speakers called for the implementation of UN Resolution 194, recognizing the Palestinian refugees’ right of return, and for the release of political prisoners. 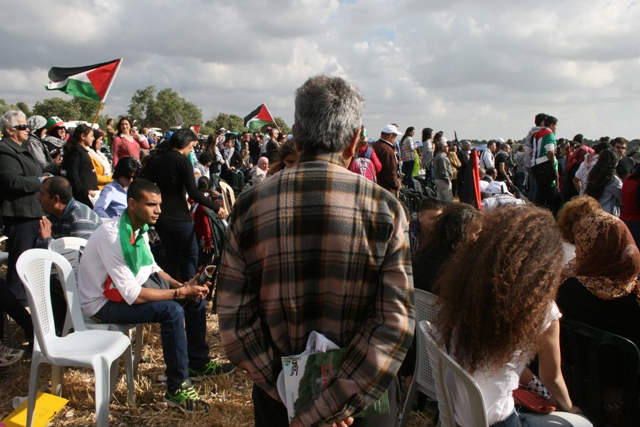 Speakers call for the implementation of UN resolution 194. (Haggai Matar)

The march was organized by the Association for the Defense of the Rights of the Displaced People (ADRID), and was attended mostly by Palestinians with Israeli citizenship (dubbed “’48 Palestinians”) and a few Jewish Israeli activists. Aside from the speeches, the rally included a cultural festival with book and food stands, and Palestinian flags and accessories and “Free Samer Issawi” shirts were sold in mass numbers. The event ended with a performance by singer Walaa Sbeit, himself a descendant of the displaced from Iqrit, who gained a large round of applause when he mentioned the outpost he and his friends have been holding for nine months now on the old village lands. 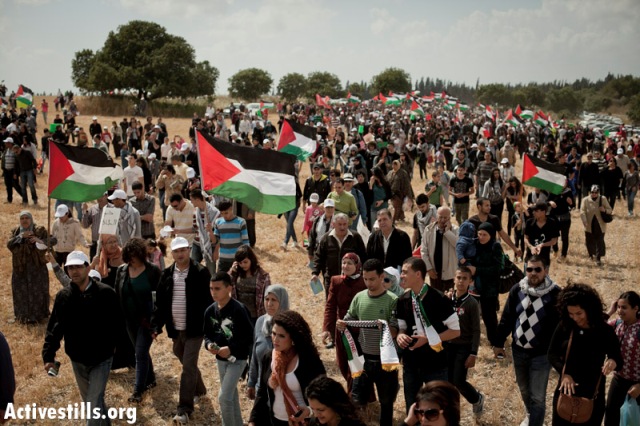 A small counter demonstration of about 40 Israeli flag-wavers welcomed the marchers to Khubeizy’s lands. Within the Palestinian protest itself, two arguments caused rifts within the crowd: one small group near the stage pulled out Syrian flags in support of Assad’s regime and against the “American-Zionist plot” to topple it, despite the request by organizers not to bring any party sign nor signs of support for either side of the Syrian civil war (arguments within the group almost turned violent). Another small group resented the fact that a Jewish Israeli, Dr. Gerardo Leibner of the Tarabut movement, was invited to speak on stage. Leibner himself responded to critics and said that unity between Arabs and non-Zionist Jews was important for the struggle. 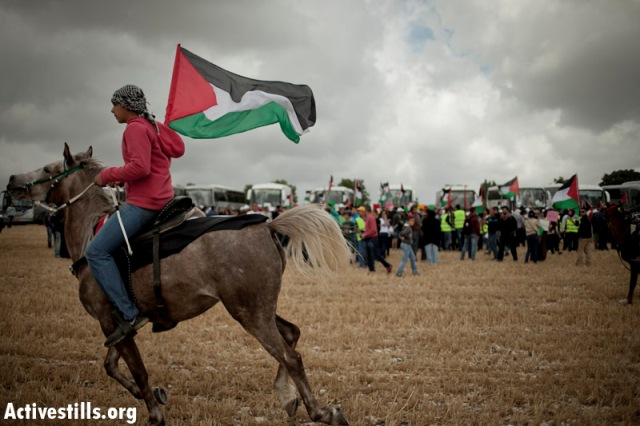 Some of the young were showing off horse riding tricks. (Oren Ziv / Activestills)

The village of Khubeizy, named after the edible plant (Malva, in English), is located in north Wadi Ara, about 40 kilometers southeast of Haifa. In 1948 it was home to 350 residents, who according to ADRID did not put up a fight when occupied. However, the village was demolished and villagers dispersed to nearby towns within Israeli territory, as well as to refugee camps in Jenin and Jordan. 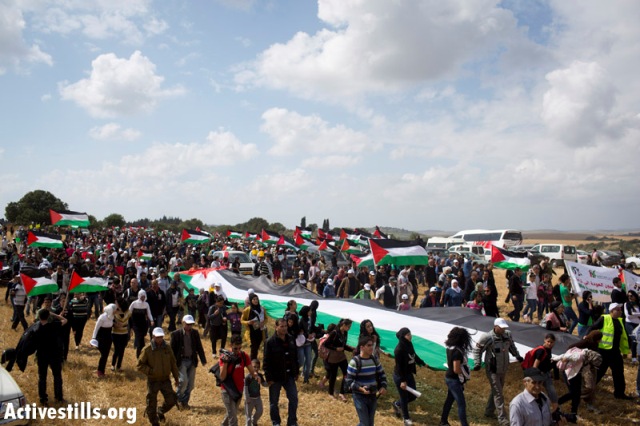 About a million Israelis celebrated Independence Day, in parallel to the annual March of Return, with the traditional barbecues and trips to nature reserves and beaches.

Related:
Israel’s Memorial Day: A day of mourning and militarism
On Memorial Day, I stand for Tomer<