Demonstrators took the streets of central Tel Aviv to show their support for Israeli human rights organizations under attack by right-wing incitement over the past weeks. Breaking the Silence executive director: ‘We were born into the occupation, we can be the ones to end it.’ 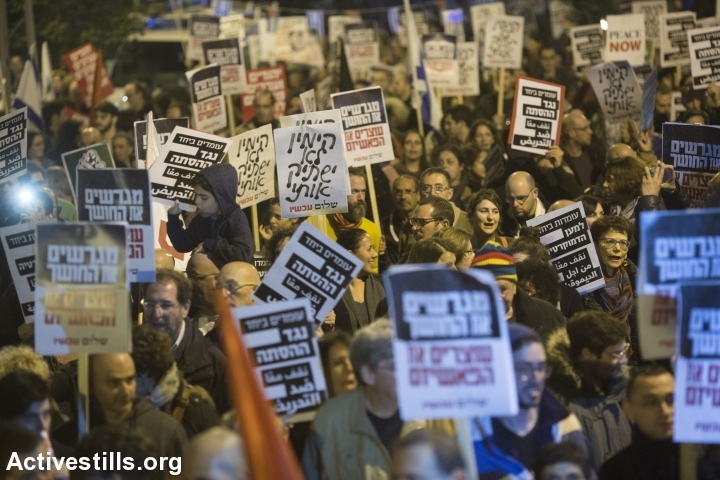 Over a thousand Israelis marched Saturday night in Tel Aviv to demonstrate against incitement and occupation, and in support of Israeli human rights organizations, peace, equality, and social justice.

The protest was organized by the group “Omdim Beyachad” (Standing Together) in response to the recent incitement by far-right group Im Tirzu and government ministers against Breaking the Silence and other human rights organizations last week.

The demonstrators gathered at Gan Meir in central Tel Aviv and headed toward the Likud headquarters just across the street. There a few short speeches were delivered on “the incitement that begins in the government offices,” which then turned into a march on King George Street, ending in the monument for slain Prime Minister Yitzhak Rabin. The protesters chanted slogans such as “Jews and Arabs refuse to be enemies,” and “The occupation is a disaster — only peace will bring security.”

Two separate counter protests also took place, which included swearing at left-wing protesters and calling out “Kahane lives.” Likud MK Oren Hazan, who previously tried to deceive Breaking the Silence by submitting a fake testimony, was one of the participants. One right-wing protestor threw a bottle at the march and was arrested. 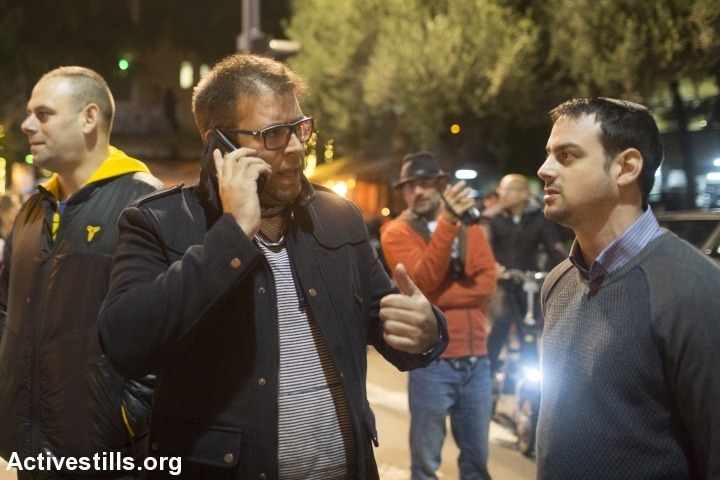 Representatives of Israel’s peace camp, including Peace Now stalwart Yariv Oppenheimer, MK Dov Khenin (Joint List), MK Ilan Gilon (Meretz) and Breaking the Silence’s Executive Director Yuli Novak, spoke at the Rabin monument. “The incitement and threats do not stop with human rights organizations or the Left, they reach the President,” said Oppenheimer, in reference to the campaign of incitement against President Reuven Rivlin taking place since he participated in the Haaretz conference in New York last week, where members of Breaking the Silence also spoke. “We are in a struggle for Israeli democracy and we have no choice but to win.” 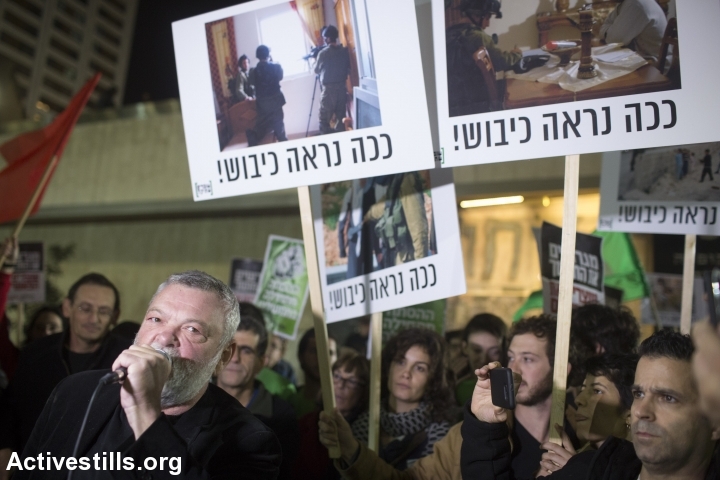 “This week saw the release of a devastating poverty report. We saw a devastating gas deal being signed. And now they are trying to blame everything on Breaking the Silence?” asked Khenin. “We see that an occupying nation cannot be free, and that the struggles for democracy, peace, and social justice are connected to one another. We will not give up on our home.”

“We love this country more than the settlers, we are willing to compromise over it,” added Gilon. “What kind of love is greater than that of compromise over this land and the people who live in it?”

Novak, who was welcomed with thunderous applause, lauded the many soldiers who have broken their silence over the past week — following attacks by the Right — and described what they went through during their service in the occupied territories. “This situation is not predetermined. We are a generation that was born into the occupation, we are the generation that can end it,” she said.

The police, who accompanied the protest in big numbers, were on higher alert than usual. Many police officers walked around with their fingers on the trigger of their guns, while officers with police dogs encircled the protesters the entire way. The police also shined flashlights on the balconies of all the homes above the route of the protest. I cannot recall this kind of police activity in any protest. The police did their job and allowed the march, as well as the counter protests, to take place safely. How unfortunate that we have reached a point that threats against nonviolent demonstrators in central Tel Aviv have become so tangible.