After numerous venues backed out of hosting the ceremony and the High Court had to intervene to allow Palestinian participants to join, the crowd exceeded capacity. Right-wing Israelis protest outside. 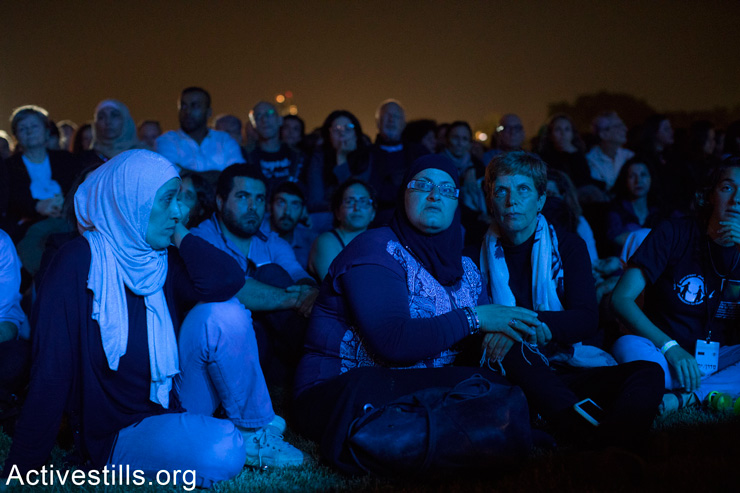 The overflow crowd was far beyond the capacity organizers had prepared for, and a significant portion of the participants were forced to stand or sit on the ground. The Israeli-Palestinian memorial event was held outdoors in HaYarkon Park after the initial venue for the event, an auditorium in the city of Holon, backed out claiming that the event was “political.”

Earlier on Tuesday, Israel’s High Court ordered Defense Minister Avigdor Liberman to reverse his decision to bar entry to Israel to 110 Palestinians who were scheduled to participate in the ceremony. Last year, the Israeli army also refused to grant permits to the Palestinian participants, so a parallel event was held in Beit Jala, near Bethlehem, in the occupied West Bank.

This year’s speakers included Adi Kahlon, whose father Dov was killed in a suicide bombing in Haifa; Dr. Amal Abu Sa’ad, whose husband, Yaqub Abu Alqian, was shot and killed by Israeli police in the Bedouin village of Umm al-Hiran; Jihad Zriar, whose son, Alaa, was shot and killed by Israeli soldiers in Hebron on his way to his grandfather’s house; and author David Grossman, whose son, Uri, was killed in the Second Lebanon War.

“Alaa was more than son to me, he was a friend to me. Together we shared the burdens of life,” Jihad Zriar said during his speech. “I miss you always, but especially today.” 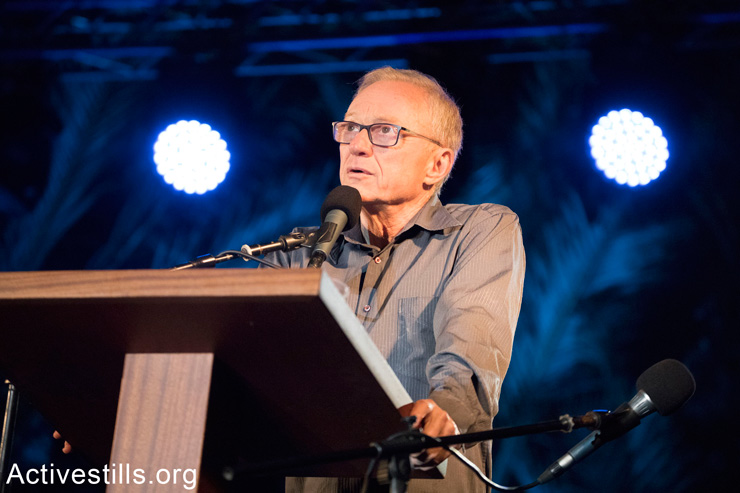 Grossman urged the audience to ignore the protests and controversy that surrounded the alternative Memorial Day ceremony.

“There is a lot of noise and commotion around our ceremony, but we do not forget that above all, this is a ceremony of remembrance and communion,” he said. “The noise, even if it is present, is beyond us now, because at the heart of this evening there is a deep silence — the silence of the void created by loss.”

Recently awarded the prestigious Israel Prize, Grossman added that he would donate half of his prize money to the Bereaved Families Forum and Elifelet, an organization that supports the children of asylum seekers.

MK Dov Khenin, seated among the attendees, stated, “This ceremony and its participants present an alternative to the policies of violence and evil. This is the true hope and opportunity for peace.”

As the ceremony’s speakers talked of loss and grief, and the desire for peace, the demonstrators’ chants and jeers could be heard in the distance.