Over 5,000 people marched in Tel Aviv in one of the largest Arab-Jewish demonstrations the city has seen in years. 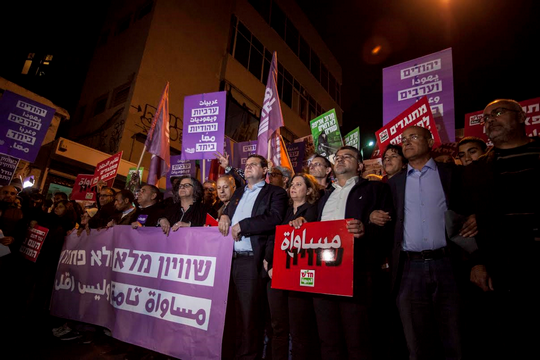 Over 5,000 Arab and Jewish demonstrators from across the country marched together on Saturday night in Tel Aviv against home demolitions and in support of equality for all. The demonstrators called on Prime Minister Benjamin Netanyahu and Public Security Minister Gilad Erdan to step down, after months of incitement against Palestinian citizens of Israel.

The demonstration was organized by a large coalition of organizations and political parties, including “Standing Together,” Hadash, Meretz, “Yad B’Yad,” “Sikuy,” and others, was the largest Arab-Jewish protest Tel Aviv had seen in years. The protesters marched along King George St. while chanting slogans such “Jews and Arabs refuse to be enemies,” until they reached Dizengoff St., where they held a large rally. Among the speakers were Joint List head Ayman Odeh and Meretz MK Michal Rozin. Meretz chairwoman Zehava Galon and representatives of the Zionist Union, who were supposed to attend, were absent. 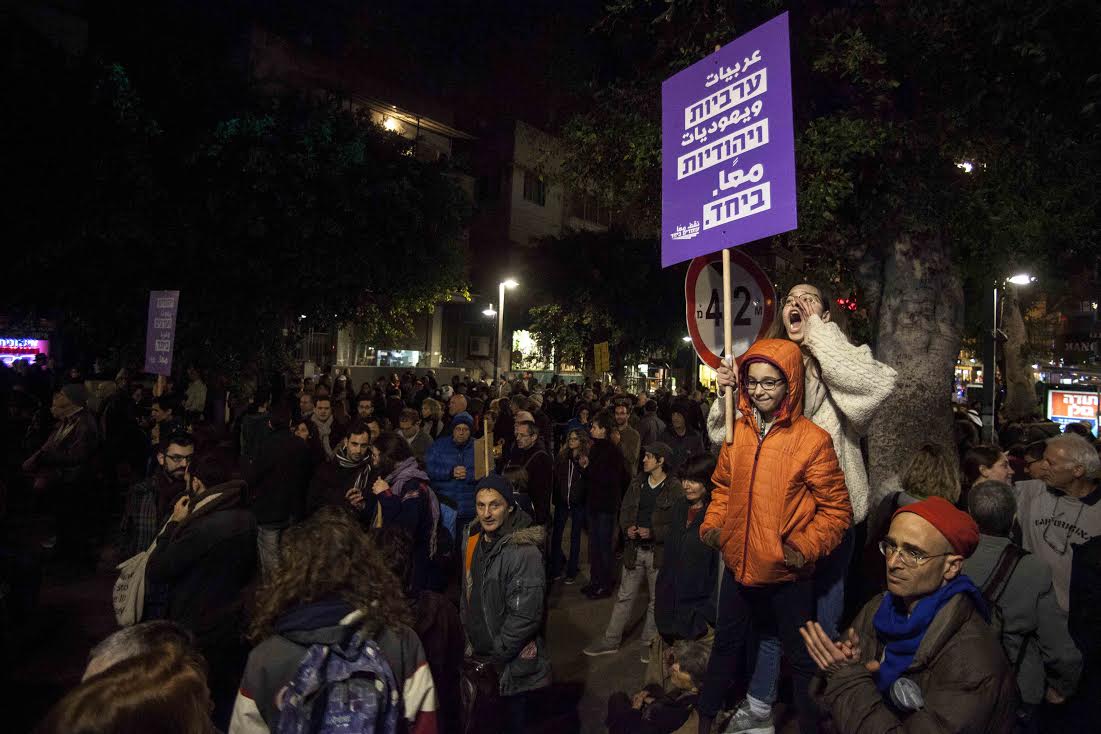 Thousands of Palestinians and Jews march in Tel Aviv against home demolitions and in support of equality for all, February 4, 2017. (Tohar Lev Jacobson)

Dr. Amal Abu Sa’ad, the widow of Yacoub Abu al-Qi’an, who was shot and killed by police in the Bedouin village of Umm el-Hiran last month. Abu Sa’ad spoke about her husband’s death at the hands of the police, about the struggle to force the state to release his body and clear his name of all wrongdoing, as well as the tragic death of Erez Levy, the police officer who was also killed in the clashes in Umm el-Hiran. “It is important for me to send a message to the prime minister and his cabinet: despite your incitement, racism, and discrimination in legislation, enforcement, infrastructure, and government services — you will not be able to divide the citizens of this country.” Abu Sa’ad also called to establish a government commission to investigate the events at Umm el-Hiran. “Let us make this place worth living in, out of respect for Yacoub and Erez.” Odeh, who spoke next, reiterated his call from a year ago to build an Arab-Jewish democratic camp that would oppose both the Right and the Zionist Left, that would call for full equality and democracy. Dr. Meir Buzaglo, a lecturer in the Department of Philosophy at the Hebrew University, invoked the shared history of Jews and Muslims in Morocco to promote coexistence in Israel, while Bar Itamari and Fatima Yahiye, two students from the bilingual Arab-Jewish school, Hand-in-Hand — Bridge over the Wadi, described both the challenge and privilege of studying together. Thousands of Palestinians and Jews march in Tel Aviv against home demolitions and in support of equality for all, February 4, 2017. (Keren Manor/Activestills.org)

Muhammad Barakeh, who heads the Arab Higher Monitoring Committee, called on the demonstrators to come back to Tel Aviv this month for another demonstration, warning against the growing partnership between the Netanyahu government and fascist parties in Europe and the United States. MK Dov Khenin (Joint List) added that it is “infuriating to see Netanyahu copy the anti-Semites in Europe. In Europe the supporters of the Tsar said ‘strike the Jews and save Russia.’ The prime minister says ‘strike the Arabs and save Netanyahu.'”