Without explanation, three Jerusalemite Palestinians are given five-month bans from the city of their birth and residence. One is banned from the West Bank as well. 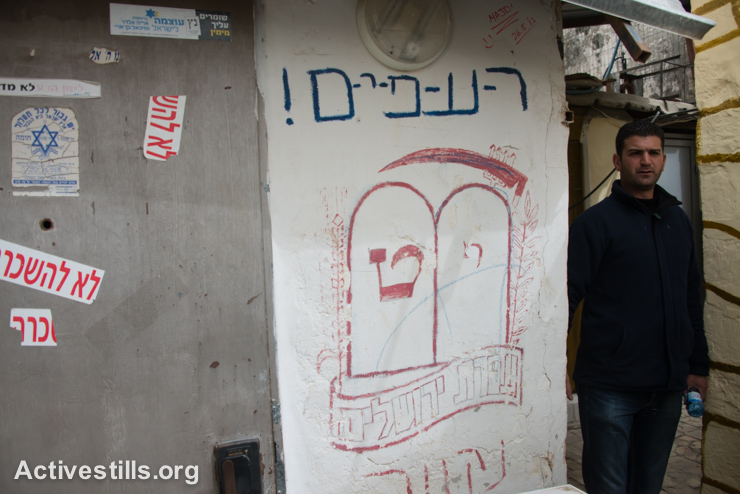 Daoud Al-Ghoul walks near graffiti painted by Israelis on properties taken over by settlers in the Muslim Quarter of Jerusalem’s Old City, March 3, 2014. Al-Ghoul was recently issued Israeli military orders banning him from both Jerusalem and the West Bank for five months. (photo: Ryan Rodrick Beiler/Activestills.org)

In early December, three Jerusalem-born Palestinians received orders from Israeli authorities banning them from the city for a period of five months. Majd Darwish, Saleh Dirbas and Daoud Al-Ghoul first received phone calls saying that they were banned from entering the Old City. When they reported to the police station as requested they were given military orders banning them from all of Jerusalem until April 30, 2015.

The orders gave no reason for their exile. All three are prominent activists and community workers who have spent time in Israeli prisons.

In a Kafka-esque twist, Al-Ghoul received an additional military order a few days later banning him from the West Bank for six months. Al-Ghoul is a youth coordinator of the Health Work Committees (HWC), a Palestinian organization providing medical services. As a Jerusalem ID holder, he would normally be allowed to travel throughout Jerusalem, the West Bank, and Israel. Because Israel controls all borders, if he leaves the Palestinian territories, he risks being denied entry upon his return. This ironically means that Al-Ghoul’s only remaining option would be to stay inside the state of Israel. But according to the HWC, Al-Ghoul has returned to Jerusalem in protest of the various orders against him. 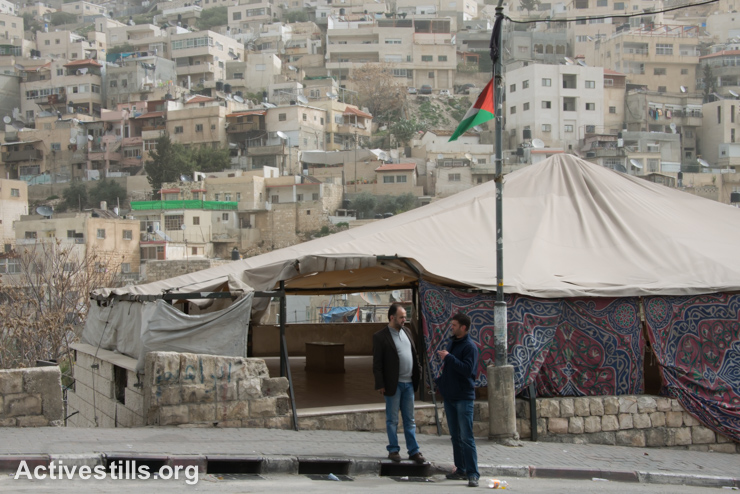 Daoud Al-Ghoul talks with a neighbor next to a protest tent built by local activists in the East Jerusalem neighborhood of Silwan, March 3, 2014. (photo: Ryan Rodrick Beiler/Activestills.org)

“We are not afraid. We are fighting for our future and we have nothing to lose,” says Al-Ghoul. “We refuse this decision. It is our homeland. It is our basic right to live in our houses in Jerusalem. We must stop Israel and their racist policies of ethnic cleansing, collective punishment and forced displacement in Jerusalem. I call on the international community to act.”

Al-Ghoul traces his family’s history in the East Jerusalem neighborhood of Silwan for four centuries. Now the Israeli settler-operated “City of David” tourist attraction and associated residential settlements have made it one of the most volatile neighborhoods in East Jerusalem. In late October, nine more settler families took over Silwan homes during a late-night operation accompanied by a heavy police presence. 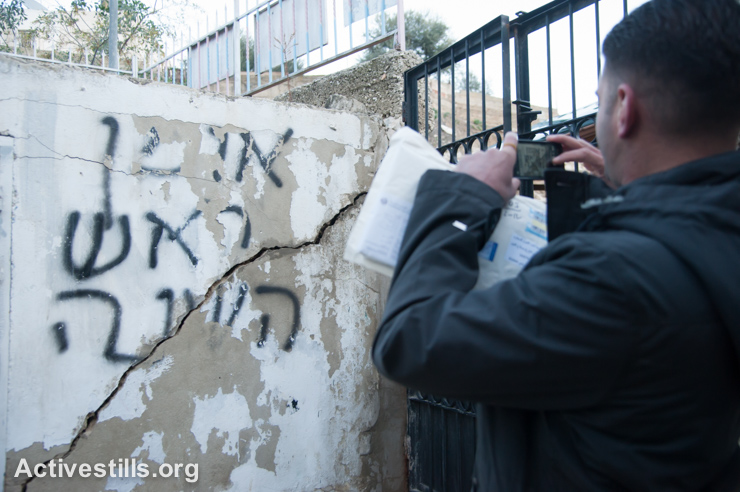 Al-Ghoul gives alternative tours of Silwan that have helped to raise awareness among internationals of the Elad settler organization’s efforts to remake a historic Palestinian neighborhood into a monument to Jewish religious and national identity. That Elad’s property acquisitions are of dubious legality matters little since they have the full cooperation of the Israeli Nature and Parks Authority and the Jerusalem municipality and police, which are also demolishing Palestinian homes and arresting Palestinian children in the process. Though annexed by Israel, the international community still considers East Jerusalem, including the Old City, to be occupied Palestinian territory.

“Such a strategy is indicative of the policy of gradual, systemic ethnic cleansing against the citizens of Jerusalem. More and more regulations, restrictive laws are being implemented against this population that is already denied its rights, in violation of the Fourth Geneva Convention,” said Yousef Habash, European representative of the HWC in a statement.

Solidarity activists have launched online petitions about this case to the Canadian government as well as the EU in English and French. 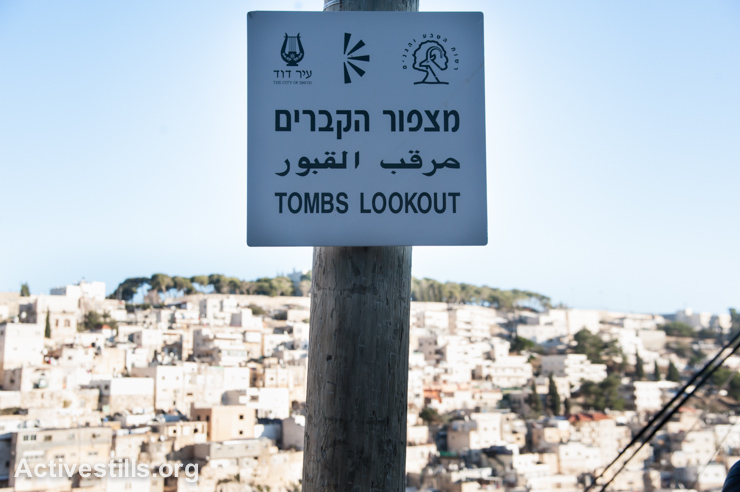 A sign from tourist attraction known as the “City of David” with a view of the Palestinian neighborhood of Silwan, East Jerusalem, December 16, 2013. The archaeological excavations and Israeli national park on the site are administered by the settler organization Elad. Though annexed by Israel, the international community considers East Jerusalem, including the Old City, to be occupied Palestinian territory. (photo: Ryan Rodrick Beiler/Activestills.org)