Let’s not pretend that there was a peace process for Donald Trump to obstruct. 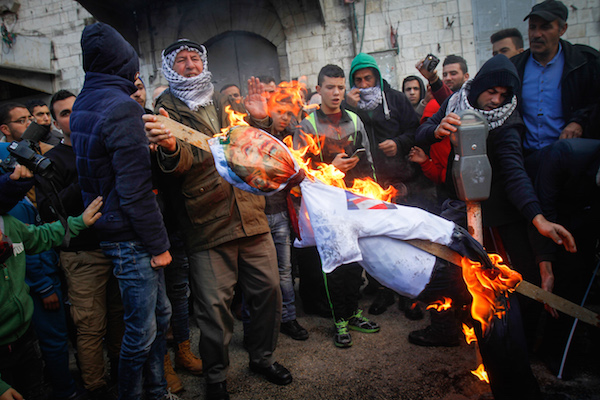 To those who are worried that Trump’s recognition of Jerusalem as the capital of Israel will create an insurmountable roadblock to achieving the two-state solution, I remind you that on at least four separate occasions in recent years (one, two, three, four) Israeli Prime Minister Benjamin Netanyahu has vowed to never withdraw Israeli troops from the West Bank. That’s surmountable?

Let’s be real. There has been no two-state option on the table at least since the late spring of 2014, before the Gaza war broke out, and probably not since 2008, when the Olmert-Abbas talks ended abruptly because the Israeli prime minister was indicted on corruption charges.

To argue that Donald Trump’s decision to move the American embassy to Jerusalem is the straw that broke the camel’s back is to ignore not just all of the actually insurmountable issues that have prevented an agreement in decades of peace talks, but also the fact that the Israeli government is explicitly not interested in allowing the creation of a sovereign Palestinian state.

By not acknowledging the existence of East Jerusalem, and thereby recognizing Jerusalem as the single “unified” city Israel pretends it to be, Trump effectively recognized the illegal and unilateral annexation of East Jerusalem. Furthermore, by mentioning Muslim connections to Al Aqsa but not the Palestinian national significance of and ties to the city of Jerusalem, he did away with the illusion of even-handedness in the United States’ approach to that aspect of the conflict.

Top Palestinian officials responded to Trump’s announcement Wednesday night with their own declaration — that the United States had effectively lost or withdrawn from its role as broker in the Israeli-Palestinian peace process. Before delving into whether that is true, or more significantly, whether to take it seriously, let’s remember one thing.

The United States has never been an honest broker in Israeli-Palestinian peace talks. As former American negotiator Aaron David Miller wrote over a decade ago: “For far too long, many American officials involved in Arab-Israeli peacemaking, myself included, have acted as Israel’s attorney, catering and coordinating with the Israelis at the expense of successful peace negotiations.” For decades that was a price the Palestinians were willing to pay because it was nevertheless the best game in town. Now that Trump is throwing out the playbook, the Palestinian leadership, especially with Hamas back at the table, may decide that no peace process is better than a Trump-led process.

The real test will, of course, be in the coming months, as Jared Kushner and Jason Greenblatt (assuming the former is still in the White House by then) attempt to get their elusive peace plan rolling. Will the Palestinian leadership meet with American officials? We’ll see if they meet with Vice President Pence on his upcoming trip. Will they entertain whatever ideas the Americans bring to the table? My bet is yes, because the other option is to fulfill the perennial threat of “handing back the keys.”

PLO Secretary General and Chief Palestinian Negotiator Saeb Erekat, known for his blusterous statements, including years’ worth of unrealized resignations, stated Wednesday night that: “Now is the time to transform the struggle for one-state with equal rights for everyone living in historic Palestine, from the river to the sea.” While it is unlikely that the Palestinian leadership will abandon the prospect of independent statehood and national self-determination, it is entirely possible that they could change strategy in one way or another, or at least add new dimensions to the struggle for independence.

As journalist Dalia Hatuqa wrote on Twitter Wednesday night: “The US had basically thrown Abbas under the bus for the 100th time. He now has nothing to offer Palestinians and he can’t use the ‘internationalization of the cause’ as a strategy. He also can’t justify his opposition to BDS anymore.”