Why the ad hoc alliance with international left activists is unhelpful to the Israeli left, and should end

One of the phenomena characterizing the coverage of the J14 protests from the beginning was the long faces of a significant number of notable international peace activists. But…but… but you’re not talking about the occupation, they demanded of the marching Israelis. They were soundly ignored, the protest became a mass success, and they became much more bitter.

At one point – it was during the third or fourth week of the protests – one of them wrote it was a struggle “about the price of cottage cheese”. I politely invited him to join Netanyahu’s PR team. He was gravely insulted, and I sincerely hope he won’t forgive me; yet the claims of many international activists against J14 were greatly similar to those of Netanyahu’s PR. We were told it’s the protest of people living in luxury, who fail to deal with the only real thing around here. Netanyahu’s bureau would call it The Second Independence War/The Second Zionist War/The Great War against the Dark Palestinian Conspiracy; the international activists just call it by that much more common name, the occupation.

As the protest grew stronger, they grew ever more bitter, spending much of their time mocking it. This behaviour raises two questions: One, just what sort of a leftist spends so much energy on opposing a protest intended to bring about a social-democratic regime, which did much to bring together Jews and Palestinians, and the only protest in the last decade – at least – which presented to a crowd of several hundred thousand Jews Palestinian speakers. The second question is: Just what the hell happened to your sense of solidarity? Why can’t you show some good will towards people who stood by your side in the West Bank, and consumed alongside you bulk quantities of CS gas?

The depressing answer is we’re not dealing with leftist, but rather with Palestinian right-winger. They suffer from tunnel-vision: All they see is the occupation. As if there wasn’t an Israel beyond it, as if people did not live and breath and love and die here, who had other issues on their mind. The never-ceasing demand from J14 to speak about the occupation, one begins to suspect, is intended for one thing only: Division of the protest movement. Then we’ll be pure and just again. Admittedly, there’ll be only about a dozen of us, but ideological purity should conquer all.

This means, of course, that these people are not actually interested in reaching any sort of goal; this, after all, demands building a coalition, and the ability to speak with the general Israeli public. They want to oppose the occupation, which makes them look nice morally, and confers a few sums of cultural capital on them. One wonders what they’ll do when the conflict ends; pine for the best years of their lives?

They don’t see themselves as partners to an intra-Israeli struggle, mainly because they consider all Israelis to suffer from an original sin, which, as long as they don’t scrub themselves like Lady Macbeth while wearing the heretic’s robe and chanting “we have sinned, have mercy upon us”, they are unworthy of justice. We’re not talking about humans, after all: Just cardboard characters from a morality play. The repertoire is limited: We have the conscious participant in crimes, we have the one who sins but sinks in denial (often played by a player who, in another play, serves as the golem), and, finally, the awakened sinner who now, after being redeemed by the Virgin Mary Mavi Marmara, tries to convince the rest of the people of Sodom that there’s a huge meteor a coming their way, before the great and terrible day of BDS. Sometimes, the irate locals crucify him, so his role is perfect. Dammit, the morality plays of the Middle Ages were more sophisticated.

And since everything is so clear and simple, any deviation from the script annoys and frustrates the producers. The players ought not to have opinions. She is not supposed to be a single mother, who thinks of making ends meet before thinking of the plight of the Palestinians. He is not supposed to be a successful hi-tech engineer, who, once he becomes a father, finds out he, too, will have to work harder just to survive. He is not supposed to be a cop who just wants to end his shift in one piece, while trying to avoid his wife so he won’t have to explain, again, why he isn’t seeking a better paying job (which basically means any job except teaching) – a cop who suddenly starts listening to the demonstrators. Hey, copper, copper! You, too, deserve better! 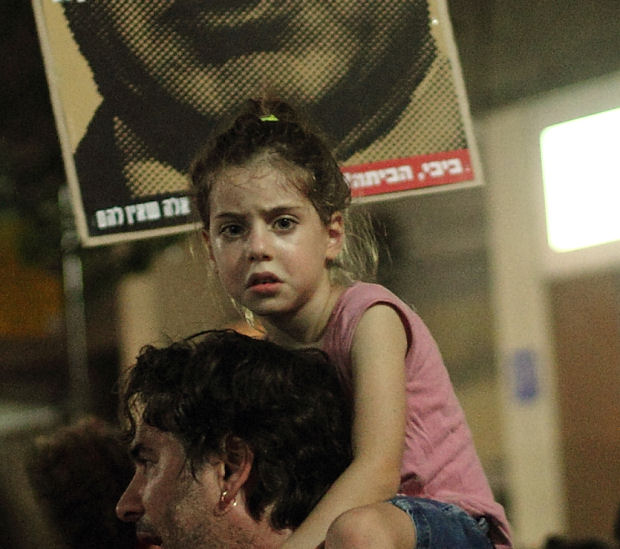 This complexity, instinctively understood by any one who grew up here, is not recognized by those who know Israel through rumors and the mask they built for themselves. Their latest complaint is the official page of the J14 movement refers to the Golan Heights as a part of Israel. The horror, the horror.

Newsflash: The Golan was annexed to Israel in 1981. Nobody except the Israeli government acknowledges it, but most Israelis – particularly the younger ones – think it is a part of Israel. Anyone asking the protest movement to make the return of the Golan to the Assad regime a priority, particularly these days, either lacks all understanding of Israel, or is willfully trying to break apart the protest movement. In short, someone who will fit right in in Netanyahu’s chambers.

Solidarity requires hard work, often unrewarding. In the 1880s and 1890s, farmers in the Midwest finally understood both parties shaft them: The republicans were taking care of the interests of big business, and the democrats busy dividing them from the black working class. The result was a short, shimmering spring of racial brotherhood, cooperation between blacks and whites against the establishment, reaching its height when hundreds of white farmers rode out to defend a black union activist from a Ku Klux Klan gang – which could be accurately described as the military arm of the Democratic Party.

It didn’t hold. The pressures were too great. Some years later, a large number of the farmers who participated in that ride themselves – having being broken economically – joined the Klan. It’s very easy to make us hate. We ought to have expected people who want Israelis to end the occupation to first live well enough to raise their heads and look around. That, of course, does not happen. Anyone who says J14 should, within six weeks, abolish a 44 years old occupation and bring down 70 years of Zionist indoctrination is probably talking from both sides of his mouth.

Israelis have never received any education about equality. The nature of equality is that is all-encompassing; history teaches us very little, but it does teach us that the idea of equality, once planted, does not let hold. Slavery in the US was doomed once the Declaration of Independence was penned.

And, since the Palestinians and the international community are active, the waiting period ought to be substantially shorter. But, again, there are people who aren’t really interested in that. It’s time, then, to lost interest in them. The Israeli radical left, which in the dark days of Sharon allied itself with international leftist groups, should return home. The old allies are of scant use and much damage. They don’t see us as allies, at most as marionettes; it’s time we returned the favour.

And yes, they’ll whine. They’re quite good at that. We survived Sharon; we’ll survive this, as well.