Authorities will begin demolishing the unrecognized Bedouin village of Umm al-Hiran on Tuesday morning — in order to replace it with a Jewish town. 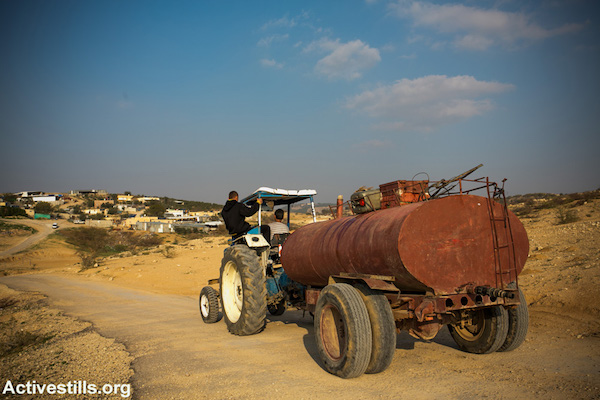 Residents of Umm el-Hiran tow potable water to their village, Umm el-Hiran. Israeli authorities have refused to connect unrecognized villages like Umm el-Hiran to the country’s national water and electricity grids, and refuse to provide them with the most basic services. (Activestills.org)

The Israel Land Authority (ILA) announced on Monday that the demolition of Umm al-Hiran, an unrecognized Bedouin village in southern Israel, would begin the next day, following a 13-year legal struggle. The state plans to build a Jewish town atop the remains of the Bedouin village.

Following the announcement, Adalah – The Legal Center for Arab Minority Rights in Israel filed a last-minute request with the Be’er Sheva Magistrate’s Court to freeze the demolition process, which was rejected. According to Adalah, the ILA announced that it has hired a private contractor to carry out the demolition at the cost of NIS 119,000 (approximately $30,760).

Umm al-Hiran’s residents are reporting that police forces have already arrived at the village in preparation for Tuesday’s demolitions, and are calling on activists from across the country to make their way to the village in order to gear up for the demolition. Joint List head Ayman Odeh announced on Monday evening that he would be spending the night in the village, also calling on Israelis to join him to prevent “devastation and destruction.”

[Update, Tuesday 11:15 a.m.: Police temporary postpone the demolition, after activists and members of Knesset spent the night in the village]

The announcement comes more than a year and a half after Israel’s High Court of Justice ruled by a 2-1 majority to authorize the state’s plan to demolish Umm al-Hiran, displacing hundreds of residents for the sole purpose of establishing a new Jewish town named “Hiran” over its ruins.

The future residents of Hiran, who are tied to the West Bank settlement of Susya, are currently living in caravans in an encampment in the adjacent Yatir forest. Because the Israeli government refuses to recognize Umm al-Hiran, it has denied its residents water and electricity for decades; meanwhile the future residents of Jewish Hiran have already been provided those services by the state and the Jewish National Fund (JNF). 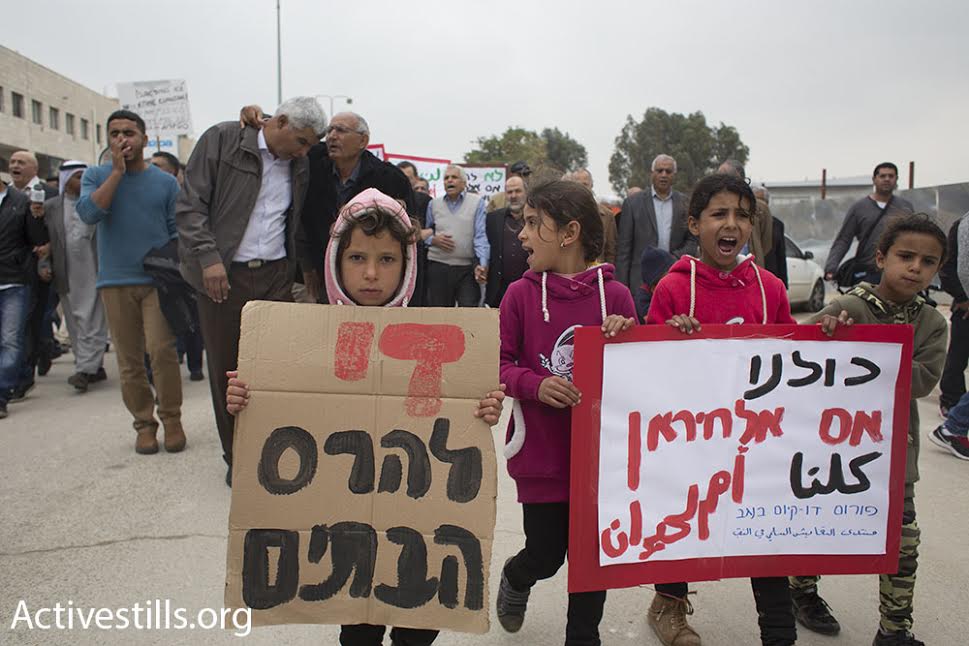 The residents of Umm al-Hiran were first expelled from their original land in Khirbet Zubaleh under a military government order in 1956. While the High Court has recognized that the residents, who belong to the Abu al-Qian tribe, were not illegal trespassers — as initially claimed by the state — it ruled that because they are now on “state land,” the authorities had the power to do with that land as they wish.

The state’s decision to demolish Umm el-Hiran — and the High Court’s refusal to prevent the demolition — effectively sets a precedent to pursue the same agenda against other unrecognized Bedouin villages in the Negev, as well as unrecognized Arab communities throughout Israel.

As my colleague Natasha Roth noted last year, Jewish settlement in the Negev has been considered Zionism’s final frontier since before the founding of the state — an impression largely instilled by the vision of David Ben-Gurion, the country’s first prime minister. “It is in the Negev that the people of Israel will be tested,” Ben-Gurion said in the 1950s. 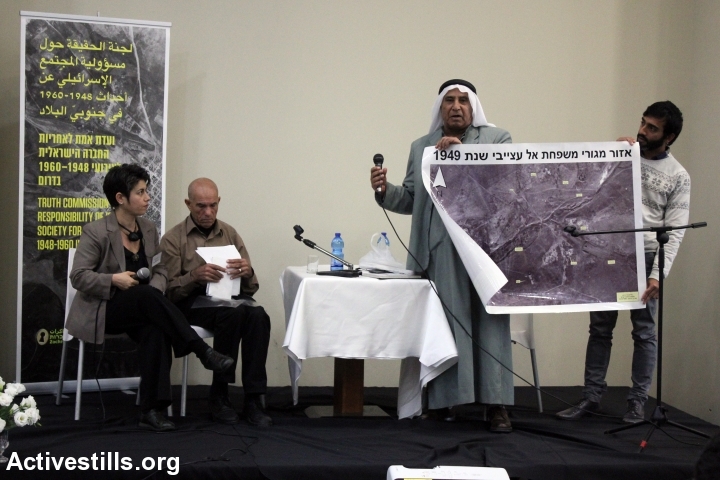 Negev Bedouin speak during Zochrot’s Public Truth Commission about the expulsion of the Bedouin residents of the Negev during the 1948 war, Be’er Sheva, December 10, 2014. (Ahmad al-Bazz/Activestills.org)

Let’s be clear about the circumstances of Umm al-Hiran’s destruction: the residents of the village are Israeli citizens entitled to the same rights as all other Israeli citizens. They were citizens in 1956 when they were first expelled from their land by a brutal military regime — which ruled over Israel’s Palestinian citizens until it was finally abolished in 1966, a year before Israel imposed a military regime over the West Bank and Gaza. They remain Israeli citizens in 2016 as they are being expelled a second time — for no other reason other than the fact that they are not Jewish.

Contrast the case of Umm al-Hiran with that of Amona, a West Bank settlement outpost illegal even according to Israeli law. Amona was built on privately owned Palestinian land in the ’90s, and the landowners went to an Israeli court to get their land back — and won. The court gave the government several years to carry out the eviction, with a deadline set at the end of 2016. The struggle over Amona’s fate has threatened to bring down Netanyahu’s government, leading its far-right ministers to pull out all the stops — including a wholesale attempt at retroactively legalizing over 100 outposts.

Unlike Amona, which was built on the theft of private Palestinian land in a territory under belligerent military occupation, the residents of Umm al-Hiran built their village after the state expelled them from their land. Yet the settlers of Amona have an entire apparatus behind them — one that ensures that in the event that the outpost is evacuated, there will be hell to pay. Umm al-Hiran’s residents, some of the poorest citizens in the country, simply do not have that privilege.