It’s fairly common these days to hear people in Israel claim that there can’t be racism because everyone is marrying everyone else, regardless of ethnicity. Except that’s not really true.

Part 1: A certain kind of truth

When I began studying film five years ago, one of the first movies they showed us was David Ofek’s “Bayit” (Home), from 1994.

The movie, which was Ofek’s final project, tells the story of an Iraqi family in Israel during the Gulf War of 1991. David (who plays himself) arrives at his parent’s home with his Ashkenazi girlfriend. Together they live through the gas masks, the ethnic differences, the air raid sirens and the debilitating heat.

We also get to meet Ofek’s parents, as well as his grandmother. And while the film is fictional, Ofek’s grandmother also plays herself, causing us to believe that there is a semblance of truth in the film. The film touches upon the difficulty of romantic relationships between Mizrahim and Ashkenazim in those days, and especially the sacrifices made in order to survive in those kinds of relationships.

It’s fairly common these days to hear people claim that there can’t be racism because everyone is marrying everyone else, regardless of ethnicity. But how true is this? And at what price?

I loved her. I truly did. She made my life hell, but something about her just caught me.

We met by chance, actually. And the truth is that I didn’t think it would go the way it did. But it did go there, and soon enough we were in a fraught and complicated relationship.

Everything was always out on the table for her. Because she had nothing to hide. She, of course, could be proud of what she was – Polish and lovely. And me? I always put my head down when she spoke about the Holocaust. I felt like I didn’t have the right to say a word. And this had consequences for the rest of our relationship. She was proud and I kept my head down.

On Holocaust Remembrance Day, she was broken and couldn’t stop crying. She constantly thought about how to make her father happy, and the radio in her car played quiet Ashkenazi music, and I would be both her shoulder to cry on and her punching bag.

And I loved her, so I remained silent.

A week later both of us finally had a day off for Independence Day. I suggested we go for a walk. She looked at me and said: “Forget it, I have no patience for all the arsim and frekhot.” And I was silent. Because she loved me. And because I can’t say that she’s a racist – she is going out with a Mizrahi, after all. But I knew exactly what she meant when she said arsim and frekhot. I had seen the way she acted in front of Mizrahim.

She always acted differently around us.

She always spoke slower, with simpler words. As if we were idiots that couldn’t understand what she wants if she uses her sophisticated, white words. And I loved her, so I believed it was thoughtful of her, that she’s trying to speak to everyone as equals.

But inside I knew – she’s racist. And I knew that, at some point, she won’t be able to handle my Mizrhainess and get rid of me.

And in the end, that’s what really happened.

Much time has passed since then.

Every so often I hear from her, or think about her and something still tugs at my heartstrings.

And then, once again, right before the new Jewish year, she sent me a text message.

“I’m worried about you.”

I asked her why.

“And why does this bother you?” I asked.

“Because you’re better than that,” she answered.

“Better than all those Mizrahim,” she answered.

My heart broke upon reading that final text message. I realized that she really didn’t understand me. That she doesn’t really love me. That she only wants to change me into something comfortable for her.

I responded: “I am definitely better than having this conversation.”

Pat Parker, a lesbian, African American poet wrote the following words in her poem “For the White Person Who Wants to Know How to Be My Friend”:

You should be able to dig Aretha,
but don’t play her every time i come over.
And if you decide to play Beethoven — don’t tell
me his life story. They made us take music
appreciation too. 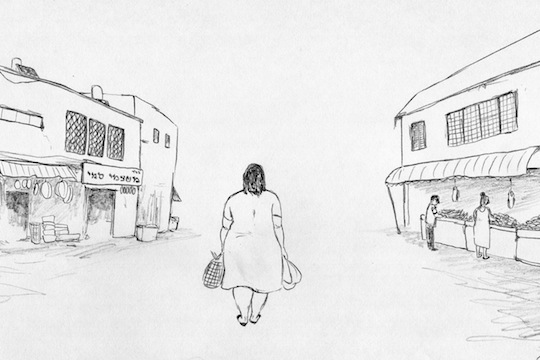 Part 4: To the next woman who comes along

I know that you’re there, so without even knowing yet who you are, I dedicate the following songs to you:

Related:
The struggle for Mizrahi recognition isn’t limited to Israel
‘But you’re not really Mizrahi’: Rewriting an erased identity
Can a Mizrahi girl fit into Israel’s national story?