While Peter Beinart’s latest book is well worth reading, his solutions come far too late and are likely to achieve little.

I’ve recently finished reading Peter Beinart’s controversial book, The Crisis of Zionism; admittedly I read it mostly to understand what the noise was all about. The book took heavy criticism, if by “criticism” you mean “ad hominem attacks,” even before it was published. It was basically attacked by the entire Jewish establishment in the United States.

Why? Because Beinart insists, as he did two years ago, on stopping to treat Israel as a special-needs child whose tantrums must be endured and soothed. He dares speak of the fact that a large part – I dare say a majority – of the Israeli public is racist beyond anything the Jewish American establishment would accept in the United States; that its tolerance towards democracy is very limited; and that soon Israel will have to choose between being a Jewish or a democratic country. It is no longer viable to speak of the two together, particularly not when Israel insists on continuing occupying the Palestinians. He also points out that the two-state solution – excoriated as treason two decades ago, and now seen as the saving mantra of Israel – is on life support.

Beinart blows up the lies American Jews love telling themselves, particularly the most shining of them, that of Ehud “We-offered-them-everything-and-they-chose-war” Barak. He refers to the fact that the occupation generates racism by its very existence:

As painful as it is for Jews to admit that race hatred can take root among a people that has suffered so profoundly from it, the ground truth is this: occupying another people requires racism, and breeds it. It is very difficult to work day after day at a checkpoint, making miserable people bake in the sun, or to blow up a family’s house as they watch, or to cut off water to a village in the Jordan Valley because Palestinians are barred from living in most of that section of the West Bank, and still see the people you are dominating as fully human. (p. 24)

Beinart further rams the hoary argument of American Jewry, according to which an American Jew must not criticize the government of Israel, since he won’t have to live with the consequences:

But for all its emotional currency, the argument that American Jews should not publicly criticize Israeli policy because they don’t live there is incoherent. For one thing, the reticence only applies to one side. If American Jews don’t live in Tel Aviv or Sderot, neither do they live in Ramallah or Gaza City. Yet American Jewish groups constantly demand that Palestinian leaders change their policies, even though American Jews would not endure the consequences of those policy shifts either. In fact, American Jewish leaders have spent recent decades criticizing government policy in a bevy of countries where American Jews do not live, from the former Soviet Union to Syria to Iran. If taken seriously, the claim that American Jews must live in a country in order to publicly criticize its government would eliminate all public moral judgment of policies outside the United States. (p. 50)

One of the most fascinating and scary chapters of the book is the one dealing with Binyamin Netanyahu’s worldview. Beinart terms Netanyahu a monist, i.e. someone who follows the Jabotinskian concept that Zionism is all that matters, and it must not be tempered with morality. Netanyahu wants to crush the Palestinians until they emigrate. He knows he can’t carry out a population transfer, so he concentrates on what was once called “the quiet transfer”: make the lives of Palestinians a living hell until their middle class cracks and runs, which will break the back of the national Palestinian movement; the rest can be then safely kept in Bantustans.

If this is indeed Netanyahu’s true goal – and Beinart presents a persuasive case – then much of what happened in the last three years makes a new sort of sense. Netanyahu speaks of the two-state solution, because it is an effective camouflage for his true plans, which are the permanent occupation of as much of the West Bank as he can hold on to. He is convinced he can break the Palestinians, and he is convinced – and who can blame him? – that by making effective use of Jewish power in the United States, he can stymie any administration’s attempt to force an Israeli retreat. 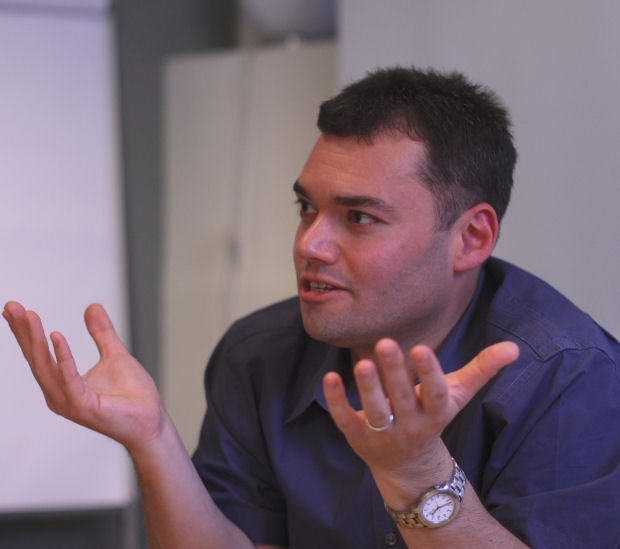 His book makes for a fascinating reading, but comes too late. Peter Beinart IPhoto: Yossi Gurvitz)

And yet, when you finish reading the book, and come to his recommendations (American Jews should boycott the settlements, the West Bank ought to be called “undemocratic Israel” – which is bound to piss off Palestinian activists), you find yourself wondering: is that it?

Beinart’s book is an alarm call, but one that should have been voiced 15 years ago, when Netanyahu first became prime minister. Then it was still relevant. The way it sounds now, as the two-state solution breathes its last breath, and is followed by the recommendation that American Jewry adopt a tactic the Israeli left first used 20 years ago – a settlement boycott – it sounds slightly ridiculous. This game is very much over. If Beinart wants the two-state solution, he needs to call on much more drastic measures: sanctions against Israel and the end of American military support of the country. I sincerely doubt he wants to go there, and I doubt even more there are any listeners for such demands in the United States.

Beinart’s other recommendation – that liberal American Jews, who keep themselves at a distance from anything Israeli with something of disgust, take their part in the debate and not leave it to Orthodox Jews – is also problematic. People choose the issues which interest them. Liberal Jews whose goal is social justice have already given up on Israel, and with good reason. The demand that they should care about Israel is a Zionist demand, and most of them are not Zionists. Furthermore, Beinart himself notes that when such liberals try to publicly sound non-Zionist positions, they become targets for the Jewish establishment. Most of them lack the stamina to withstand such attacks. As the attacks on Beinart himself show, they can hardly be blamed for this.

Read also:
The political is personal: The allure of Peter Beinart