Israel’s use of torture is part and parcel of the occupation, and an inseparable part of maintaining the military occupation of Palestinian territories and Jewish hegemony in those lands. 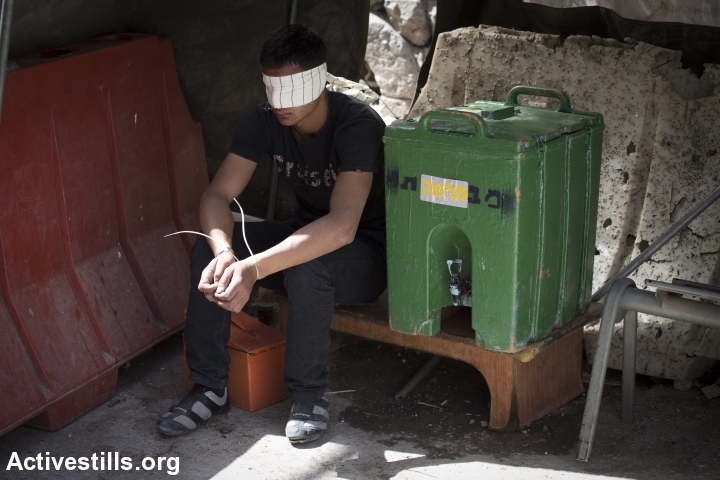 A new report about torture at the Israeli Shin Bet facility Shikma is, rightfully, making headlines. The details are horrendous. The report, penned by HaMoked and B’Tselem, is also significant because it points to the close collaboration between Israel and the Palestinian Authority — essentially reminding that the former is outsourcing its dirty work to the PA.

While the report is new, we shouldn’t forget that torture in Israel is not. Palestinians have long suffered under the apparatus of the military occupation, with word of the practice surfacing in the 1970s — 40 years ago. Israeli human rights attorney Lea Tsemel says she was first exposed to accounts of torture in 1972, during the “Haifa Trials.” In a report on the issue for Adalah, Tsemel writes:

The Haifa Trials were only the beginning of my exposure to torture cases, because subsequently all manner of very cruel tortures – indeed those classic tortures that you read about in books and hear of in Guantanamo and Iraq – were used here very often. There were so many detainees to interrogate using these methods that they had to shorten the interrogations in order to process more people.

It is estimated that some 700,000 Palestinians have been detained by Israel since the occupation began in 1967.

Of course, the vast majority of the interrogations of thousands of Palestinians took place in the GSS centers. Today, the fact that most of the interrogations of political detainees involved torture or ill-treatment during the first 32 years of the Occupation [before the High Court’s 1999 ruling] is no secret. Almost every Palestinian who was interrogated can tell you about the sleep deprivation, the denial of access to a toilet or shower, the hunger, the physical pressures, including being made to sit tied to a small stool for days, the beatings and the kicks, the threats, the hanging, the bending, the shaking (sometimes to death), etc.

She also points out the fact that the Israeli public has known about the widespread phenomenon since 1977, when the London-based Sunday Times press published dozens of Palestinians’ accounts of the torture they had experienced in the hands of Israeli forces.

In the book Palestine Speaks, a collection of narratives about life under Israeli occupation, Palestinian attorney Abdelrahman al Ahmar recounts the torture he experienced at Israeli hands in 1984, when he was just a teenager. After Israeli soldiers took him from his parents’ home in Dheisheh refugee camp in the middle of the night — a practice that is still commonly used against Palestinian children today — al Ahmar was brought to the Russian Compound in Jerusalem. It was a cold, winter night and the interrogation began thus:

…they took off all of our clothes, stripped us naked. Then they tightened our handcuffs, took us outside in an open area, and put bags on our heads. The snow was coming down, and we were naked out there. I couldn’t see the others, but I could hear their teeth chattering, and the sound of the handcuffs shaking was so loud…. This is where we stayed for forty-five days between interrogations. Our bodies turned blue, we were out in the cold so long.

Al Ahmar recalls the grim details of the interrogations that were conducted by Israeli authorities:

[T]hey beat me, and there was loud music playing the whole time. We were allowed to go to the bathroom just once a day. They would tie our hands to the pipes… If I lost consciousness, they would throw water on me or slap me so I’d wake up… Sometimes they would keep me awake for many days straight before they gave me four hours of sleep. And with the pressure of sleep deprivation, I started hallucinating…

Today, al Ahmar’s body still bears the signs of torture. He has a scar on his wrist, he explains, because “[t]he handcuffs were so tight they cut to the bone. I still have marks on my legs from the beatings.”

For almost 40 years, the Israeli public has known about these practices. The same is true of the international community. Yet the horrific violation of human rights that is torture continues. And nothing will change until torture is understood as a gruesome but entirely unsurprising symptom of military occupation and Jewish privilege, both inside Israel and beyond the Green Line.

Sadly, it seems that the gross violation of human rights isn’t enough to make Israelis and the Jewish diaspora reflect critically on these practices. So, here’s another tack: torture can also be understood as an unfortunate but necessary tool to maintain the military occupation of Palestinian territories and Jewish hegemony in those lands. As such, it is the duty of all Israelis and Jews to ask themselves if a project that necessitates such brutal tactics is worth continuing and, if so, are we willing to pay the bill that inevitably comes in the wake of such atrocities. Because pay, we will, in blood and spirit.