Despite attempts to conceal the memory of stones in the village of Hunin, papers in the kibbutz archives left a trail revealing the hidden war. In his bold book, Stone, Paper, Tomer Gardi places history in its present, as a driving political force, while rejecting the practice of historical writing.

There is a children’s game called “rock, paper, scissors.” It’s played with two players: each one hides his or her hand behind the back, and then they stretch their arms out forcefully and simultaneously, making one of three possible signs that stand for either a stone, paper or scissors. The power is asymmetrical and decentralized. Rock beats scissors, scissors beat paper, paper beats rock.

The rock in this book is the stone used to build the Beit Ussishkin Museum in Kibbutz Dan. They are the very same stones bargained over by the Jewish National Fund (JNF) and the State of Israel after the destruction of the village of Hunin in 1948 (the village is also mentioned in Walid Khalidi’s book All that Remains: The Palestinian Villages Occupied and Depopulated in 1948). The paper wrapping the stone, defeating it, is the archive paper. Still, it is the same paper on which one can find traces of the past. This is what Tomer Gardi does in his book, Stone, Paper (Hebrew, Hakibbutz Hameuhad, Black Sheep Series, 2012)

Gardi presents a document of the Hagana, the pre-State force acting as a Jewish army, that testifies to the following order: “Our intention is to break into the village and kill a few men, capture prisoners, blow up some of the village houses, and burn down anything that can be burned.” Benny Morris has written about the results of this order: “During the summer four village women were raped and murdered by IDF soldiers. In August, some inhabitants were forced by the IDF to flee; the remainder fled the following month, after an IDF raid in which 20 were killed and 20 buildings demolished.” (Benny Morris, 1948, p. 249) 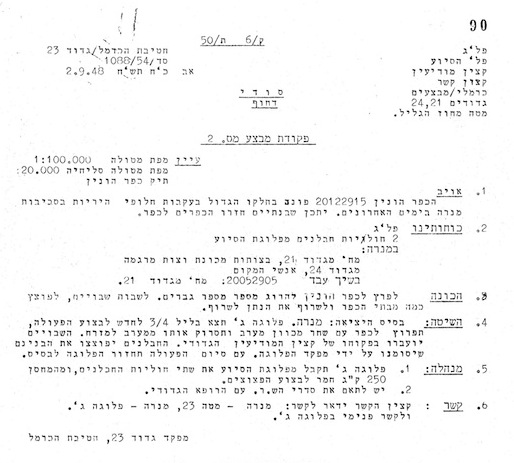 Hagana document calling on soldiers to enter a village, kill and burn

Gardi then leaves the deportation and goes on to explore stones and their surplus values. From the minutes of a meeting of the Custodian of Absentee Properties from May 31, 1951 he quotes one Mr. Zagursky reporting on disorder while collecting building materials: “We thought that we had already sold all the building materials we collected, and suddenly we discovered an untreated, highly valuable amount of material lying around. As of today, there are 400 deserted villages, of which only a few were settled with new immigrants by the Jewish Agency. Now, we must make a decision, which villages should be destroyed for the production of valuable building materials.”

Another document, from October 1948, describes a JNF grievance against the Custodian of Absentee Properties, for forcing the JNF to pay for the stones: “There is no sense in charging us the price of the stones, which must be removed, so that returning inhabitants are not be able to use them for their dwellings.” The Custodian replies that the price it is asking for the cut stones, 200 mils (the term for the currency representing 1/1000 of the British Pound at the time. The lira was still tied to the pound – eds.), is much lower than the price paid for them by kibbutzim and public institutions: 1.25 Israeli Liras.  This is the political economy of expulsion.

This brave and infuriating book is also about the scissors – the censor’s scissors, both public and private. Paper and scissors are the main tools used in the archive. The scissors cut the paper, but also leave a trail of its erasures. Gardi writes: “I ponder how a document is shelved, and I figure that the order to shelf a document, or parts of it, a document that would otherwise be exposed to the public eye, is given orally.” Similarly, he accounts for the kibbutz’s surprising level of awareness, to document its history in the making. In June 1948, for example, a document is distributed to a number of kibbutzim requiring the collection of archival material, capturing “the power and bravery of the kibbutzim as well the spirit of heroism and self sacrifice demonstrated by our soldiers during the war.”

Who holds the scissors? Gardi writes: “The archive can show whatever it wants the present to be, and mainly whatever it wants the past to be….” An account of rape follows, committed by Jewish soldiers. Shoot, rape and weep. The document revealing the rape is not about the rape, but about the way to prevent the return of Palestinian refugees. Discussing this issue, the document mentions that “a while ago, four Arab women had been captured, and the military personnel sexually assaulted them and then killed them.” From the documents we learn that a pathologist had examined the skulls of the three women whose bodies were found: one was 15 years old, another woman was in her 20s and the third was a woman over 40. One bullet hole was found in the front of the skull of the 15-year old; in the skull of the 20-year old, a bullet hole was found in the back of the skull and the older woman’s skull was crushed. Yes, it’s the same rape and women’s murder mentioned by Benny Morris. But why hasn’t he considered the sexual terror as part of Palestine’s ethnic cleansing?

Who took the minutes of the meeting in which the rape was mentioned? A woman soldier, perhaps? In a brilliant move, Gardi identifies another “present absentee” beyond the raped and murdered women. What was the woman who wrote the protocol thinking? Has she been thinking about the women’s rape? Did she cover for the men for reasons of national solidarity? Has she taken revenge against them out of feminist solidarity? Even more importantly, Gardi shows how political rape and gender-based rape are highly intertwined.

Gardi grapples with the question of why the discipline of history excludes historians’ mundane practice from history? Why does it conceal the public transportation’s sweat-soaked seat, the archive’s cafeteria, the wilted tomato bleeding on the sandwich and the state of the crumbling archive’s papers? Why are the archival erasures not taken into the historical account? The archive is always in a state of emergency, of constant war. The archivist told Gardi about an Arab student who visited the archive two weeks before him. She said she had hid the same archival materials Gardi was seeking from the Arab student, explaining: “The kibbutz has to protect itself.”

Michel Foucault’s book “Society Must Be Defended,” refers to such a State of Emergency in order to defend the state and its mnemonic technologies. Archives conceal the war, the same way the law does. Not the outside war, but the hidden one, the war inside. There is still war. We are all in a State of Emergency. In a State of Emergency there is no liberal law. There are friends and there are foes. This book is about loyalty and treason or betrayal. including betrayal in the family, a piece of the nation, as Frantz Fanon put it. In such a situation, we all are classified by war categories.

This is not a history book. The archival and discussion portions are couched within excellent fictional prose. inseparable from the ontology of the present ontology. The first thing that came to my mind was Multatuli’s (Latin for “Suffered a great deal”) “Max Havelaar,” the Dutch official spreading information about the crimes of Dutch imperialism in Indonesia, in real time, planting the testimonies within an innocent book about coffee. Clearly, Gardi didn’t want this book to be a history book and he clearly rejects the practices of historical writing. He seeks the ways in which speech occurs. Or silence.

In this case, how does fiction fit in this book? Doesn’t it weaken the argument by way of transgressing it? I don’t think so. Elias Khoury’s Bab Alshams (Gate of the Sun) is an excellent example. Both Khoury and Gardi place history within its present. Both view history not as frozen and petrified, but rather as a powerful driving political force. Both Khoury and Gardi show us that the Nakba is not over yet, and that making 1948 constantly present is a most important political move.

Gardi made genuine and honest efforts to share the book’s writing process with descendants of the men and women of Hunin. Unsurprisingly, they did not respond. Tomer Gardi is the occupier, the settler. Therefore, he eventually explores his own identity, the Israeli identity in the light of the Nakba. The denial, the lies, the renovation and rewriting of history, the self-righteousness, the mask covering the face. Using scissors, the books cuts many tears in this mask.

Yehouda Shenhav is a Professor of Sociology at Tel Aviv University.  This article was originally published in Haoketz in Hebrew, on March 7, 2012.