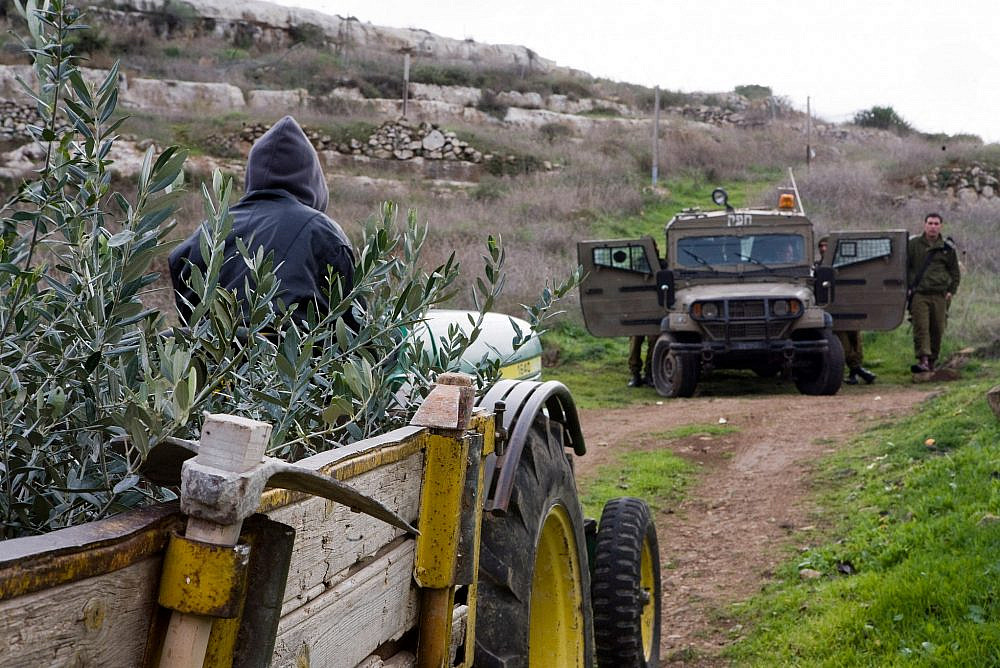 Israeli army blocks the road for a Palestinian driving a tractor, during an olive planting action in the village of Deir Nizzam, Ramallah district, West Bank, December 15, 2009. (Keren Manor/Activestills)

In the dead of night on Dec. 1, 2021, Israeli soldiers marched into a small Palestinian village in the Jordan Valley in pursuit of an odd target: tractors. They woke up the families of Ras al-Ahmar, ordered them out of their homes, and confiscated their agricultural machinery. The village, located in the occupied West Bank, is home to some 180 residents, all farmers and livestock herders.

“It was 4 a.m.,” recalls the village mayor, Abdullah Bisharat, a few months after the incident. “They confiscated tractors, trailer carts, and water cisterns right at the start of the plowing season. About 3,000 dunams [740 acres] of unsown land went to waste. That night was a bitter blow to all the families.”

The Israeli army justified the confiscation with the excuse that the village lies inside a military “firing zone.” Almost 20 percent of the West Bank, however, has been declared firing zones by the occupation authorities. Around 38 Palestinian communities live within these areas and are at risk of expulsion.

Previously unpublished data from the Civil Administration — the arm of the Israeli military that governs the occupied territories — which was collated by the NGO Kerem Navot, suggests that confiscations of Palestinian agricultural and construction equipment (including tractors, cranes, construction materials, and water cisterns) have leapt nearly threefold over the past seven years. Confiscations of similar equipment from Israeli settlers in the West Bank, meanwhile, dropped by 42 percent over the same period.

Data obtained by Kerem Navot further shows that, between 2014 and 2020, the Civil Administration raised more than NIS 8 million [$2.4 million] from release fees for the seized equipment, and profited some NIS 2.5 million [$750,000] from selling equipment that owners were unable or unwilling to reclaim. In other words, the Civil Administration raked in over NIS 10 million from the confiscation of agricultural and construction equipment over that period.

To reclaim materials and equipment, Palestinians are typically requested to pay about NIS 6,000 [$1,800] to NIS 8,000 [$2,400] apiece — far exceeding the costs of the confiscation process itself, according to the army’s own records.

The acquisition of this data required two separate appeals under Israel’s Freedom of Information Law. “We requested the information from the Civil Administration a year ago, but they ignored our requests for months,” says Dror Etkes, the founder of Kerem Navot. “When we finally got the data, we understood why.”

Etkes continues: “The data shows the enormous gaps in enforcement against Israelis and against Palestinians with regards to construction in Area C,” referring to the 60 percent of the occupied West Bank which is under full Israeli civil and military control, and where firing zones also lie. “This is stuff anyone working on the ground sees every day — in the huge spike in demolition of Palestinian construction, and the jump in the number of illegal [Israeli settlement] outposts in recent years.

“The data faithfully reflects the nationalist radicalization of Israeli politics in recent years and the culture of apartheid, which is spreading across the Israeli authorities in the West Bank, beginning with the Civil Administration itself,” he adds.

‘It’s all part of a policy to drive us out’

The legal pretext for Israel’s confiscations is most often the offense of working in an area defined as “state land” or a “firing zone,” or doing any work outside of zoning plans that Israel has authorized for Palestinian communities under its full control — which it almost never does.

The seizures are not limited to Area C; Israel also confiscates Palestinian agricultural and construction equipment in Area B, where responsibility for civil matters, such as planning and construction, ostensibly falls under the Palestinian Authority. Here, Israel employs “Construction Ban 1/96,” which prohibits building near major roads, even in areas under Palestinian control.

In September 2021, for example, work began on a playground in the village of Jaba’ near Jenin in the northern West Bank. The Civil Administration presented a stop-work order and confiscated the contractor’s excavator, claiming the playground was within 100 meters of the Ramallah bypass road, which Israel built within Area B in the 1990s. 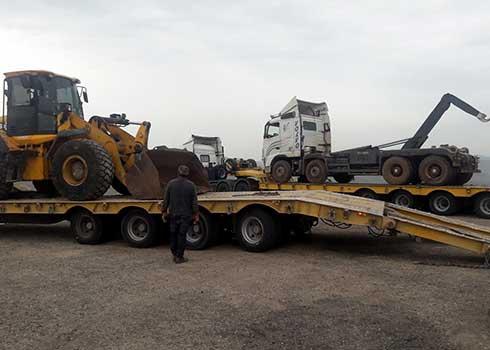 “No one dares to bring in a tractor or any other kind of vehicle to plow the land,” says Bisharat. “People are going back to plowing with a donkey, like in the old days. It’s making life very difficult. It’s all part of a policy to drive us out.”

Palestinian farmers are especially dependent on tractors and pickup trucks for carrying water cisterns and hay bales for livestock. This is because the army, as a general rule, bans Palestinians from building access roads and water infrastructure in Area C, which contains most of the West Bank’s agricultural land. Confiscating this equipment, then, can paralyze an entire community.

In many cases, the Israeli army confiscates Palestinians’ agricultural equipment while work is ongoing. This is what happened to Mohammed Bani Odeh, a resident of the Jordan Valley, who was using an excavator to dig a trench for an irrigation pipe on his land, where he grows za’atar.

“As I was digging, soldiers showed up and said I was doing it illegally,” he recalls. “They confiscated the digger for ten days. I had to pay NIS 8,000 to get it back.”

The escalating confiscation campaign has been fueled in part by Israeli settler activism. Over the past two years, settlement regional councils have set up WhatsApp groups where residents can report whenever they spot any Palestinian construction work taking place. The Civil Administration has also set up a hotline for such reports, nicknamed “War Room C.” 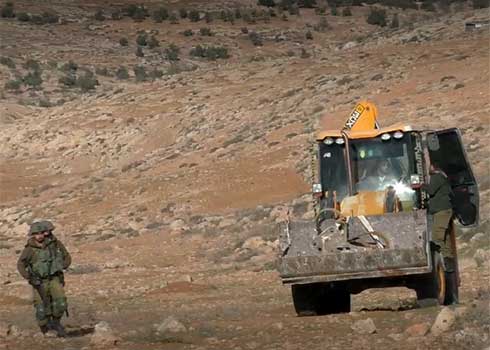 A presentation by the Mateh Binyamin Regional Council, in the northern part of the West Bank, prepared for a conference on the issue in April 2021, claimed that hundreds of its residents take part in the reporting process, alongside civilian security coordinators (employed by the army in each settlement), inspectors, settler farmers, and others. One slide boasted of 600 reports made by settlers in 2020 alone, all within the regional council. The reports resulted in 60 confiscations.

Another pretext for confiscation is working on land that Israel expropriated as far back as the 1980s, often without the knowledge of the Palestinian farmers. Last month, in the Masafer Yatta area of the South Hebron Hills, two tractors were confiscated from one such plot of land. These areas, which Israel calls “state land,” are effectively apartheid areas, barred to Palestinians and allocated exclusively to Jewish settlers.

On other occasions, the confiscations are carried out without any legal pretext whatsoever, but rather simply in response to requests by settlers on the ground. This was the experience of Sa’id Alian, who owns land near the illegal outpost of Mitzpeh Yair. Last March, Alian and his wife were attacked by a group of masked settlers with metal pipes while they were having a picnic on their own land. Alian’s wife filmed the attack.

This year, when Alian needed to work in his olive grove, he made sure to notify the Civil Administration and the army, in the hope that this would protect him from similar attacks. The army responded by confiscating his excavator and his tractor, with no apparent pretext except acquiescing to the demands of the settlers’ in the illegal outpost nearby.