When I traveled to Morocco last year, I was escorted from the airport by security — for my protection, because of my Israeli passport — and greeted with ‘Shabbat Shalom.’ When I told the airport official ‘thank you, but I am not Jewish,’ he responded, ‘it does not matter.’ 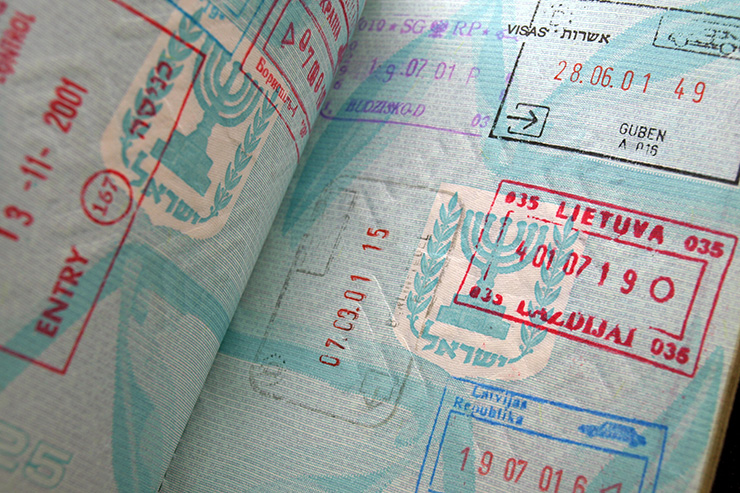 ‘Everything becomes more difficult whenever I cross borders. The in-betweeness of my identity is lost. To immigration officers, government officials, and school administrators, only the nationality listed on my passport matters.’ (Zilan2000/Shutterstock.com)

At home, we speak Arabic intermixed with Hebrew. We deal with Israeli law, Israeli institutions, and can participate in the Israeli political system. But we are always conscious of our Palestinian heritage.

Everything becomes more difficult whenever I cross borders. The in-betweeness of my identity is lost. To immigration officers, government officials, and school administrators, only the nationality listed on my passport matters.

When I traveled to Morocco last year, I was escorted from the airport by security — for my protection, because of my Israeli passport — and greeted with “Shabbat Shalom.” When I told the airport official “thank you, but I am not Jewish,” he responded, “it does not matter.”

In 2013, I applied for a visa to conduct research in Egypt. The application has been pending ever since. I did not really know what happened until recently when my Egyptian friend, whose address I had used on the application, finally told me that Egyptian intelligence officers had come to her house and questioned her about her relationship with “this Israeli student,” even though I wrote my name in Arabic on the application. My Israeli passport trumped my Palestinian heritage.

I regularly find myself having to explain the history of how some Palestinians ended up with Israeli citizenship: in 1948, Israel granted citizenship to the Arab natives who survived the Nakba and remained within its newly established borders. Suddenly isolated from the rest of the Arab world, the Palestinian community inside Israel was subject to military rule until 1966, while the government expropriated large swaths of land belonging to them and to other Palestinian refugees.

Because our schools are controlled by Israel, our Palestinian identity is mostly passed down to us at home, where we learn about our history and culture. Our sense of otherness is further reinforced through racist rhetoric and discriminatory policies in Israeli society and government. Senior politicians regularly propose plans that would push Arab citizens and villages out of Israel in a resolution to the conflict. The Jewish Nation-State Law is another, more recent reminder of the fragility — and inferiority — of our civic identity. ‘We have learned to cope with all of these challenges. We attend universities in mainly Jewish cities and work with, make friends with — and, yes, sometimes even marry — Jewish Israelis. This never seemed a contradiction to me.’ (Miriam Alster/FLASH90)

We have learned to cope with all of these challenges. We attend universities in mainly Jewish cities and work with, make friends with — and, yes, sometimes even marry — Jewish Israelis. This never seemed a contradiction to me. I saw it as part of my reality and identity. We are proud of our Palestinian heritage, but that shouldn’t necessarily prevent us from interacting with the Israeli Jewish community.

When I first moved to the United States to study, I would tell people I am from Israel. It didn’t take long to figure out how complicated that answer is, and how polarizing it can be. Many Americans would assume that I am Jewish. Some would then feel comfortable expressing to me how much they “love Israel” and how “the best solution for the Israeli-Palestinian conflict is to kill all Arabs.” So I started introducing myself as a Palestinian citizen of Israel.

I find myself having to explain my identity not only to foreigners but also to Jewish Israelis and fellow Arabs. At a conference in the United States earlier this year, a Jewish Israeli participant was confused by how I could be both Palestinian and Israeli. Israel uses the term “Israeli Arabs” to define us, a term I avoid because it disregards our heritage and attempts to disconnect us from the Palestinian struggle.

At the same conference, a Jordanian participant confronted me for hanging out with an Israeli attendee from Tel Aviv University, and for criticizing Hamas. Last year, at an airport in Turkey, I met an Egyptian woman who, after finding out where I am from, told me, “I thought you guys did not speak Arabic.” While looking for a job, someone in Doha asked me, “how can you justify working for the Zionist state?”

The more friends I make from around the Arab world, the more difficult I find it to explain why I sometimes use Hebrew words here and there, why I have Israeli citizenship, and why I cannot personally boycott Israel. I have found myself having to defend how I self-identify, and having to clarify my stance on the conflict. There is an expectation of me to support any group resisting Israel, regardless of their ideological and religious views. I am also expected to boycott Israel, even though it is where my home is, where my family lives, and where I can have a more significant and meaningful impact.

The forced projection of these identities, and the expectations and assumptions that come with it – whether from Jews, Arabs, or Westerners – strips us of our right to define ourselves. It compounds the marginalization we experience in our land by alienating us from ourselves, our history, and our lived experiences while we are abroad. It should be up to us, the people living the conflict, to interpret our own experiences and determine our own identity accordingly.