Donald Trump and former Iranian President Mahmoud Ahmadinejad have plenty in common — including a propensity for outlandish claims and bombastic speeches that veer into messianism. 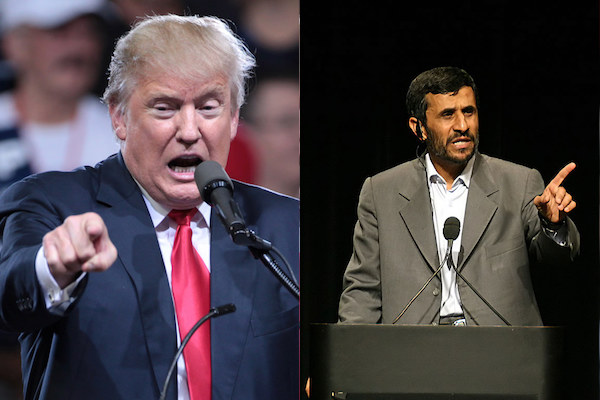 It was almost a year ago that Shervin Malekzadeh published a brief but incisive essay — which we republished immediately after the November 8 election — on the striking parallels between then-candidate Donald Trump and former Iranian President Mahmoud Ahmadinejad. Among other similarities, he noted:

As populists gifted with a preternatural ability to understand their country’s low mood, Trump and Ahmadinejad possess the authenticity of the non-politician and newcomer who says what he means. One is a brash businessman from the outer boroughs and the other a blacksmith’s son, but they both give voice to those who feel like they have no say. They are impervious to good manners or the pieties of good politics, their rhetoric is corrosive to the prospect of civil discourse, and they represent permanent thorns in the sides of their respective political establishments. And both men have nonetheless forced their societies to reckon with truths long unspoken, a necessary precursor to the improvement of the polity. In their reckless, emperor-has-no-clothes style of politics, Trump and Ahmadinejad demonstrate why it is necessary to destroy taboos as a salutary act, even as they remind us of why we need taboos in the first place.

One week into the Trump presidency, the thrust of Malekzadeh’s essay seems very much confirmed. The belligerent, “America First” surliness of the new president is well on the way to isolating the United States from the rest of the world, beginning with Mexico, much as Ahmadinejad’s gratuitous provocations, such as Holocaust denial, succeeded in isolating Iran, even from those countries that were open to establishing better ties.

Similarly, both presidents may rely heavily for their policies and ideas on rather mysterious, nationalistic, and possibly sinister grey eminences determined to take on their respective ruling “establishments.” In Ahmadinejad’s case, it was Esfandiar Rahim Mashaei; in Trump’s, Breitbart’s Stephen Bannon.

But in the last week, other, almost uncanny similarities have materialized in the realm of psychology cognition and possibly religious experience.

Trump, for instance, seemed sincerely convinced about the size of his followership and how they and perhaps even the cosmos respond to him. At CIA headquarters the day after his inauguration, he famously went on and on about what he still sees as the historic and almost supernatural nature of the event:

I looked out, the field was — it looked like a million, million and a half people. They showed a field where there were practically nobody standing there. And they said, Donald Trump did not draw well.  I said, it was almost raining, the rain should have scared them away, but God looked down and he said, we’re not going to let it rain on your speech.

In fact, when I first started, I said, oh, no. The first line, I got hit by a couple of drops. And I said, oh, this is too bad, but we’ll go right through it. But the truth is that it stopped immediately. It was amazing. And then it became really sunny. And then I walked off and it poured right after I left. It poured. But, you know, we have something that’s amazing because we had — it looked — honestly, it looked like a million and a half people.

Those remarks couldn’t help but recall those of the former Iranian president. According to an account based on a transcript and video recording originally published by the Iranian site baztab.com, Ahmadinejad made the following comments in a meeting with a leading cleric about his first address as president to the UN General Assembly in September, 2005.

[Someone present at the speech] said when you [Ahmadinejad] began with the words ‘in the name of God,’ I saw that you became surrounded by a light until the end [of the speech]. I felt it myself, too. I felt that all of a sudden the atmosphere changed there, and for 27-28 minutes all the leaders did not blink.

I am not exaggerating when I say they did not blink; it’s not an exaggeration, because I was looking. They were astonished as if a hand held them there and made them sit. It had opened their eyes and ears for the message of the Islamic Republic.

That passage, in turn, recalled Trump’s interview on ABC broadcast Thursday in which David Muir asked him about his remarks about the Inaugural at CIA headquarters. His reply:

That speech was a home run. That speech, if you look at Fox, OK, I’ll mention you — we see what Fox said. They said it was one of the great speeches. They showed the people applauding and screaming and — and they were all CIA. There was — somebody was asking Sean — ”Well, were they Trump people that were put –” we don’t have Trump people. They were CIA people.

According to the videotape of Ahmadinejad’s remarks, Ayatollah Amoli reminded the Iranian leader that the duties of officials of the Islamic Republic included, above all, “carrying out promises and restraining from fooling people [emphasis added].” Although it wasn’t clear whether he was responding specifically to Ahmadinejad’s claims about the effect of his UN speech, the advice seems to resonate today.

Jim Lobe served for some 30 years as the Washington DC bureau chief for Inter Press Service. This article is reproduced with permission from lobelog.com.