Netanyahu and Trump believe that Israel can occupy the West Bank forever. The ‘deal of the century’ that the U.S. plans to present is based on the assumption that the Palestinians have neither the will nor the power to resist. 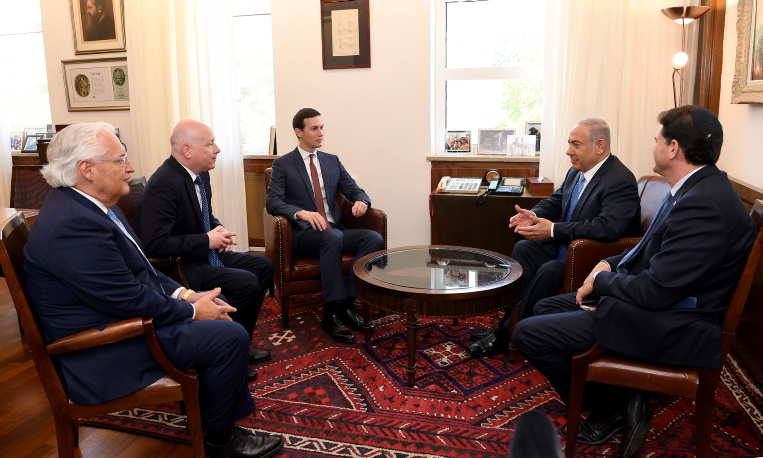 A recent exposé in the New Yorker sheds light on the formulation of the Obama and Trump administration’s Middle East policies, revealing how Netanyahu passed on Israeli intelligence about the outgoing Obama White House’s political plans to the incoming Trump administration. The article, by Adam Entous, also describes the close ties between Netanyahu and Trump, and the ways in which they have teamed up to fight Iran, though which Israel’s ties to the United Arab Emirates and Saudi Arabia were also formed.

Entous brings the reader face to face both policymaking inside the White House and the Prime Minister’s residence in Jerusalem. This is what international diplomacy looks like unvarnished and without public relations manipulations.

There are three things we can learn for the New Yorker’s report and from reports about the recent meetings between Trump’s Middle East envoys, Jared Kushner and Jason Greenblatt, ahead of their presentation of the “deal of the century” between Israel and the Palestinians.

Firstly, it’s bad news for the lobbyists and pundits. Obama’s White House realized late into its second term that Netanyahu was playing them — and, even then, they avoided confronting him. It is understandable why Obama decided not to confront Netanyahu openly, but it is difficult to understand why it took so long for Obama and his staff to figure out that Netanyahu was misleading them.

Similarly, John Kerry realized only very belatedly what the settlements meant for the prospects of the two state solution — after, according to Kerry, speaking with Netanyahu for at least 130 hours and flying 40 times to meet the prime minister. 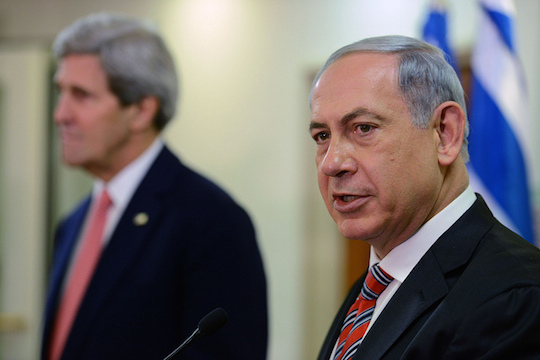 In other words, the total impact of the information published by organizations that monitor the settlements, the work of left-wing and human rights groups, the op-eds published almost daily, and the working papers prepared by the professional levels of government, was almost zero. When it came time to make decisions, awareness did not translate into policy — policy was the product of other considerations.

The conversations between lobbyists, experts, and Israeli and European think tanks with their American counterparts and diplomats of different ranks ran horizontally rather than upwards and did not matter in the crucial moments. And if this is what is was like under Obama, one can only imagine what’s happening now under Trump.

Secondly, if one wants to understand what sets the policy priorities shared by the Trump and Netanyahu administrations, one must read the comments sections — not the op-eds, working papers, or articles by international relations professors. Netanyahu and Trump, as well as their inner circles, believe that Obama “gave the Palestinians everything” and that he was “too nice to them.” Obama, they say, “threw Israel under the bus” and put its security in danger. Trump and Netanyahu say they won’t play nice or sacrifice Israel’s security; they will offer a lot less and push a lot harder. In the end, the Palestinians won’t have a choice but to accept what’s dictated to them —  and if they refuse, they’ll be punished. 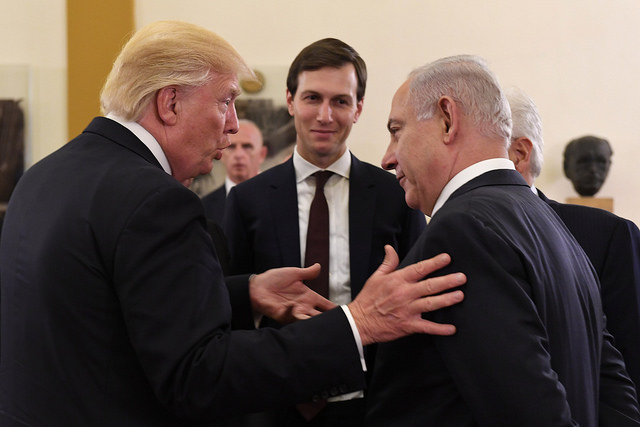 Even now, it is clear that Trump’s envoys have managed to enlist the Egyptian president, the Saudi crown prince, and the crown prince of the United Arab Emirates to pressure PA President Mahmoud Abbas to end his boycott of the United States and to accept Trump’s peace plan. Iran is threatening us, they tell Abbas, and we need the help of the U.S. and Israel: take the little that Trump is offering, you have nothing to lose, you are weak, Israel is strong, the U.S. is on its side.

Egypt, Saudi Arabia, and the United Arab Emirates are three of the four members of the Arab Quartet. The fourth member, Jordan, supports Abbas’s refusal to accept any deal that deviates from the Arab Peace Initiative of 2002. Abbas trusts Jordanian King Abdullah, who has become a mediator between Abbas, on one side, and Kushner, Greenblatt, and Netanyahu, on the other. As Netanyahu and Trump’s envoys attempt to convince King Abdullah to support the U.S. and Israel’s “state-minus” proposal and to completely isolate Abbas, the Jordanian king is attempting to influence the negotiations in the opposite direction.

Thirdly, both Trump and Netanyahu believe that Israel can, and is even historically entitled to, control the West Bank forever. The solution for Gaza, according to them, will come from massive investment in infrastructure and economic redevelopment. They see the Palestinians in Gaza as lacking nationalist consciousness, desiring only to improve their quality of life: give them projects funded by the Arab countries, some of which will be built partially in Egyptian territory, and they won’t try to charge the fences in protest. If their nationalism leads them, on occasion, to act rashly — for example, the Great Return March protests or the flying of “Molotov kites” — they will be responded to with massive, not to say excessive, force as a reminder that they should give up. It’s bound to work.

Trump and Netanyahu have not learned from history — they’re repeating it. Between 1967 and 1987, the Israeli occupation, which was then relatively restrained compared to its brutality today, improved the economic situation of the Palestinians but did not weaken their nationalist aspirations. On the contrary, they began the First Intifada. The notion that guided Ehud Barak and Bill Clinton at Camp David in 2000 was that Arafat would only be willing to concede if he was forced into a corner and denied any option other than to accept Israel’s terms, backed by the U.S. This approach was captured in the picture of Ehud Barak forcing Yasser Arafat to enter before him the cabin where Clinton was waiting for them. Camp David ended without Arafat accepting the U.S. and Israel’s dictates.

At the beginning of the Second Intifada, Israeli forces fired one million bullets at Palestinian protesters, according to the then-head of Israeli intelligence. Even then, they didn’t give up.