A slip of the tongue from Prime Minister Benjamin Netanyahu last month is worthy of attention. In an unprepared response to a Likud Knesset member, Netanyahu said: “What I’m willing to give to the Palestinians is not exactly a state with full authority, but rather a state-minus, which is why the Palestinians don’t agree [to it].”

This almost never happens to Netanyahu. He is calculated, in contrast to Defense Minister Avigdor Liberman who once threatened to execute Hamas leader Ismail Haniyeh and destroy his movement. In his public appearances, Netanyahu’s statements are carefully worded. His mind operates mechanically, and it is for this reason that a slip of the tongue warrants attention. He has given away more than he intended to.

Netanyahu’s words need to be tied back his stance during the negotiations with Palestinian President Mahmoud Abbas, as part of the 2013-4 peace talks initiated by then-Secretary of State John Kerry. Netanyahu’s position was that even following an agreement, Israel would retain security control over the entire area between the Jordan River and the Mediterranean Sea over the coming decades. The best case scenario for the Palestinians would have been a severely handicapped state. What would a less ideal scenario have looked like?

In order to answer that question, we must also look at Netanyahu’s support for the Formalization Law and for settlement expansion, two processes he has pushed forward with since Donald Trump entered the White House. The significance of these processes, territorially-speaking, is the end of the “temporary” occupation and the effective annexation of around 60 percent of the West Bank.

Where Netanyahu differs from Jewish Home head Naftali Bennett is in the type and reach of annexation, not in the principle of annexation itself. Bennett wants to advance from legal to practical annexation as soon as possible. Netanyahu is more cautious. He first of all wants de facto annexation, and to do it in stages so that the world and the Palestinians can adjust to the new reality. 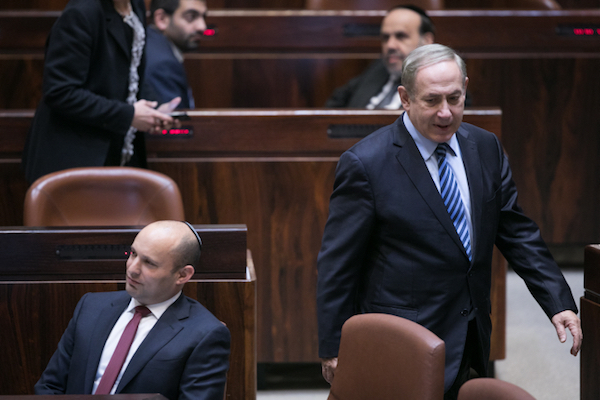 This would be followed by a self-evident de jure annexation, which would seem almost natural. Palestinians would be left with what they currently have: enclaves that are barely connected to one another. Israel would govern them externally and enter them at will. As far as Netanyahu is concerned, if the Palestinians want to call this kind of autonomy a state, that’s their affair. This would also mark the definite end of the Oslo Accords; the Palestinian Authority would not be upgraded to a sovereign state on the entirety of the 1967 territories.

Netanyahu is exploiting Abbas’ adaptability and passivity. Abbas pays no attention to the voices calling on him to shutter the Palestinian Authority and hand over the keys to Israel, who would then have to bear full responsibility for its policies. He persists in security cooperation with Israel on the grounds that they share the same enemies: Hamas and the Islamic State. Abbas and the PA also have an interest in keeping the benefits that they receive as part of a ruling class sponsored by Israel.

The continued existence of a hobbled PA is also in Europe’s interests. European countries donate heavily in order to keep the PA in its current incarnation, on the premise that it is a stable factor in fighting radical Islam and prevents the Israeli-Palestinian conflict from engulfing the continent’s cities. 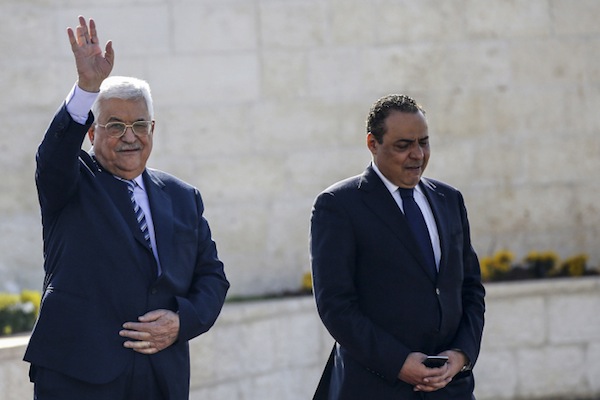 Yet Netanyahu is using Trump even more than he is using Abbas, hence the importance of their upcoming meeting in D.C. Trump’s position on Israel-Palestine remains unclear, and his limited attention prevents him from getting into the details. He is a man of simplistic principles that can be summarized in a formula — the opposite of Barack Obama and Kerry. Trump rejected UN Security Council Resolution 2334, which reaffirmed the international understanding of the borders of June 4, 1967 as the future border between Israel and a sovereign Palestinian state. Trump also condemned Obama’s decision not to use the U.S.’s veto.

Trump also denounced Kerry’s final speech on the Middle East, in which he portrayed the Netanyahu government’s annexationist policy as racist. Israel believes that continuing to rule over the Palestinians when there are equal numbers in both demographic groups will allow it to remain a Jewish and democratic state. Kerry called this an illusion, saying that the result would be “separate but unequal.” He deliberately used the term for the racist regime of separation that formerly prevailed in the U.S. According to Kerry, such a regime is in opposition to America’s democratic principles, and as such, the U.S. could not support it. Trump’s executive orders and senior appointments, however, have shown that he has a different understanding of American democracy and the rights of minorities.

Netanyahu and Trump hold similar basic positions. Netanyahu can try to nail down Trump’s agreement to a “state-minus” policy, and present it as a security necessity that will prevent the West Bank from falling into the hands of radical Islamists. As part of such an approach, Netanyahu could also secure the president’s blessing for settlement expansion in the West Bank, especially in the Jerusalem area.

An agreement with Trump would allow Netanyahu to tackle the expected opposition from Western European countries to the plan for a state-minus. These countries’ guiding values will be far more similar to those of the Obama administration than the Trump administration. Meanwhile, Netanyahu was encouraged by the U.K.’s decision to activate Article 50 in order to leave the European Union, and its overtures to Trump as a replacement; he hurried to meet Prime Minister Theresa May, who had herself just returned from D.C.

The Israeli government has also drawn encouragement from the various messages coming out of Europe that continued settlement-building endangers the two-state solution. That is, indeed, the aim. Up until Kerry’s speech, that had also been the automatic response of the Obama administration. From the moment Kerry declared that the settlements were creating a racist regime, Netanyahu perceived the danger of a new international agenda. Instead of the question of a Palestinian state, attention is now on the question of whether Israel is an apartheid state.