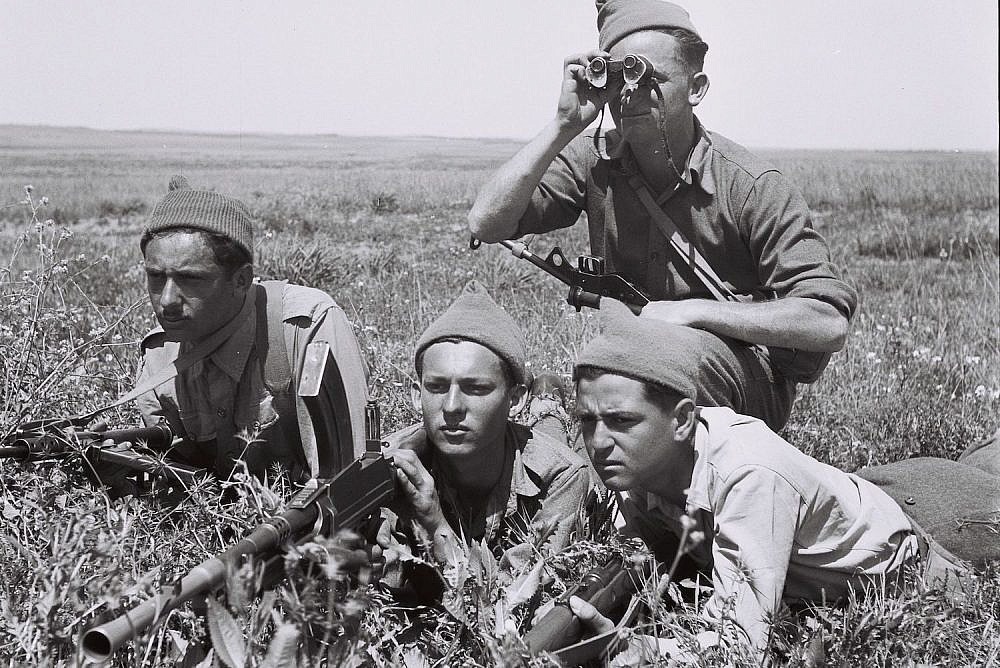 Members of the Haganah militia training in the Jeezrel Valley during the 1948 War in Palestine, March 3, 1948. (Zoltan Kluger/GPO)

President Trump has hardly attempted to hide his contempt for the Palestinian people. His unveiling of the “Deal of the Century” on Tuesday revealed in the clearest way possible what he thinks of the millions of Palestinians — in the occupied territories, inside Israel, and in the diaspora — who would be affected by his “peace deal.”

Trump’s remarks dripped with classic racist imagery. For one, he used the words “terrorism” and “terror” nine times when referring to Palestinians in his speech. This is in contrast to the praise he showered upon Israel, which the president described as an island of democracy and prosperity. In the president’s eyes, Palestinians are “trapped in a cycle of terrorism, poverty, and violence,” and must renounce terrorism as a condition for establishing their own state.

The president’s caricature of Palestinians as terrorists is also familiar. From Israel’s very founding, Palestinians were portrayed as violent revolutionaries whose sole purpose in life was to annihilate the Jewish state and Jews writ large. That view was fostered at the very top of the Israeli political establishment — including Prime Minister David Ben Gurion, who ordered Israeli soldiers to implement a “free fire policy” along the country’s borders. That meant they could shoot and kill Palestinian “infiltrators,” many of whom were refugees trying to return to their land.

What is peculiar about these mantras of Arabs as “violent savages” is that they elide Zionism’s own history of terrorism, which played a central role in Israel’s establishment. This amnesia, particularly among the Israeli public, is what cultural studies scholar Marita Sturken terms “strategic forgetting,” in which nations choose what histories to overlook while favoring more positive national or cultural memories. 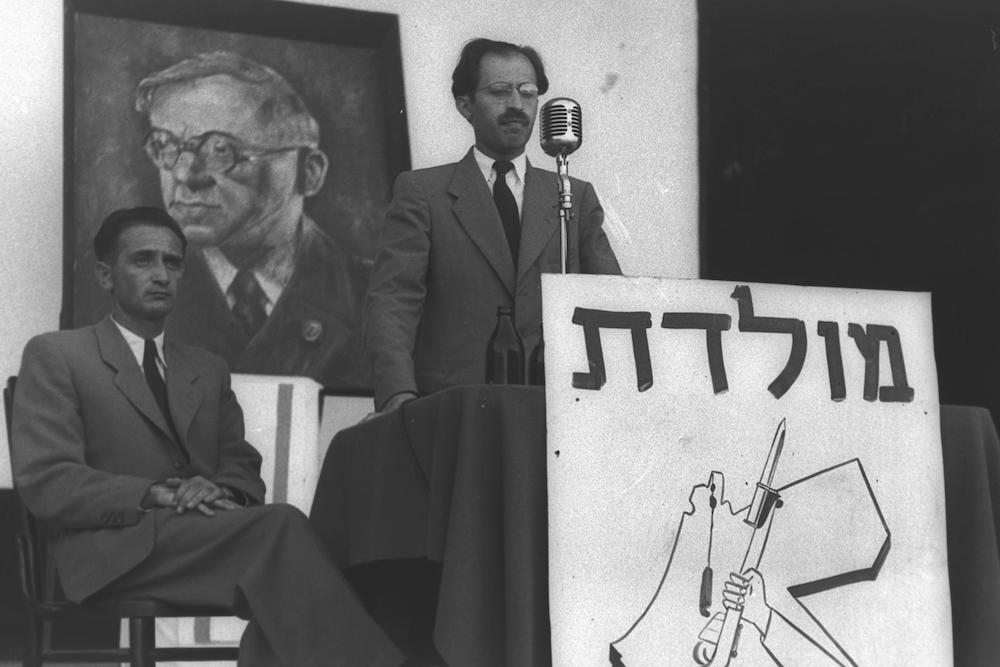 For example, Israelis prefer to forget that before they were prime ministers, Menachem Begin and Yitzhak Shamir were zealous militants who orchestrated brutal acts of terror against Palestinian civilians, attacked British soldiers and high-ranking officials, and even assassinated foreign dignitaries.

Begin’s 1951 book “The Revolt” — which not only became canonical among the Israeli right but also inspired the likes of Nelson Mandela — lays out in detail, and with great bravado, the ways in which Zionist militants from the Etzel and Lehi paramilitary groups blew up Arab markets and fought a bloody guerrilla war against British forces, which Begin referred to as “The Occupation Army.”

The celebration of Zionist terrorism goes beyond these memoirs. All around Tel Aviv, one can find metallic bronze plaques celebrating the victories and defeats of the pre-state Zionist militias. A plaque in the south of the city commemorates a tunnel dug by Etzel militants leading to a British military installation, which they intended to blow up. Another nearby plaque marks the spot in which two Lehi fighters, posing as telephone repairmen, drove a car bomb into a British communications center, killing several policemen.

There are dozens of these markers scattered across the city. Some commemorate Etzel weapons factories, some where Lehi printed its leaflets, and some where the Haganah — the largest and most prominent Zionist paramilitary group, which carried out the majority of the expulsions during the 1948 war and formed the backbone of the nascent Israeli army — ran secret induction and training centers. All these plaques not only carry the insignias of the Zionist militias, but also feature the official seal of the Tel Aviv-Jaffa Municipality. 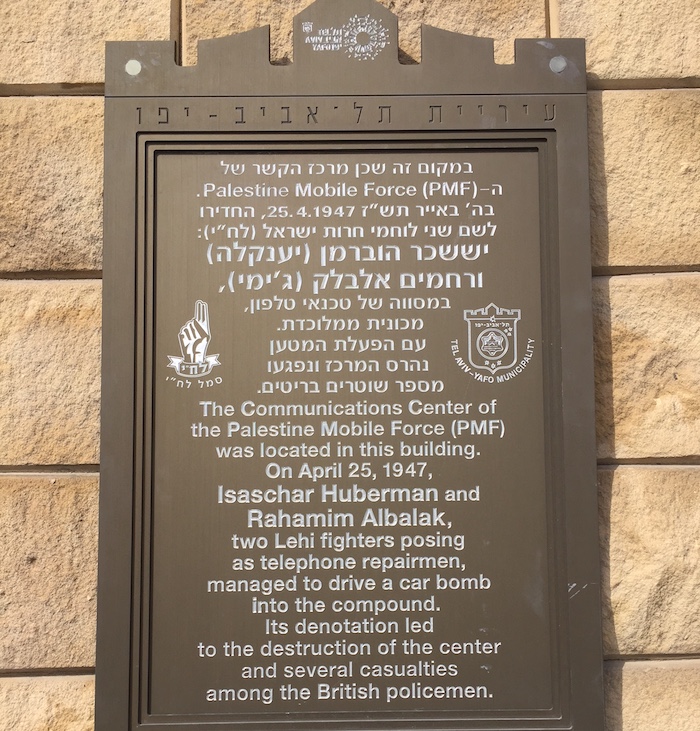 A plaque in south Tel Aviv commemorating an attack by the pre-state Lehi militia on British police officers.

The city is also home to four museums dedicated to the memory of the paramilitary groups. Walking south along the Tel Aviv promenade, one comes upon an old Palestinian building. This is the last remnant of the neighborhood once known as Manshiyyeh, which today serves as the Etzel Museum in honor of the group that “liberated” Jaffa during the 1948 war. A stone sign near the building’s entrance lists the names of the Etzel members killed in the operation.

That “liberation” entailed the expulsion of some 95,000 Palestinians from the Greater Jaffa area, many of whom were forced into in refugee camps in the West Bank and Gaza. Thousands of other Palestinians, many of them fleeing from neighboring villages to Jaffa, were concentrated into a small section of the city surrounded by barbed wires, which the Israeli authorities casually referred to as “The Ghetto.” 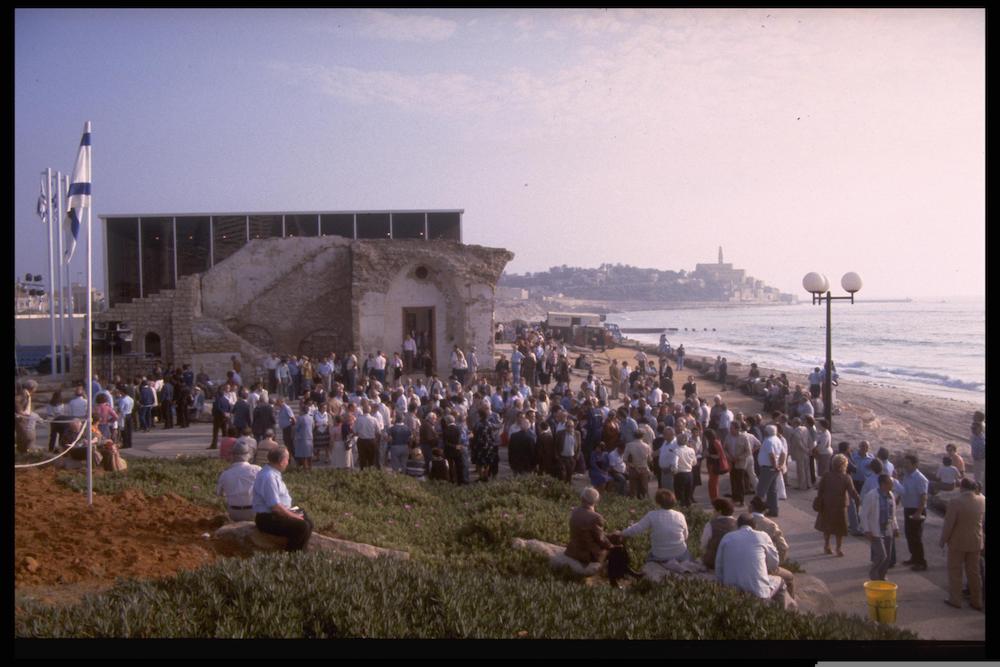 The inauguration of the Etzel Museum on the Tel Aviv Promenade, May 15, 1983. (Nati Harnik)

The Zionist militias’ expulsions, massacres, weapons caches, and tunnels extended far beyond the confines of the Tel Aviv-Jaffa area. They were part of a nationwide war effort, without which the State of Israel may not have come into being. As I wrote several years ago when the Israeli army uncovered Hamas tunnels from Gaza into Israel’s territory: “Had the State of Israel of today faced off with the pre-state Zionist movements, it surely would have condemned their human rights violations and bombed them into oblivion.”

Such a violent history is by no means unique to Israel, but it does serve a profound lesson for the conflict. Given their history, Israelis should be the first to understand why some who struggle against a foreign occupier for liberation and self-determination will turn to violence. Trump, of course, will not be the one waking Israel up to their past, or even daring to make comparisons between Palestinian and Jewish political violence. But somewhere down the line there may come a U.S. president who will.