Washington defunding the Palestinian refugee agency is not merely an attack on UNRWA, as serious as that may be. It is an attempt to destroy the Palestinian national movement. 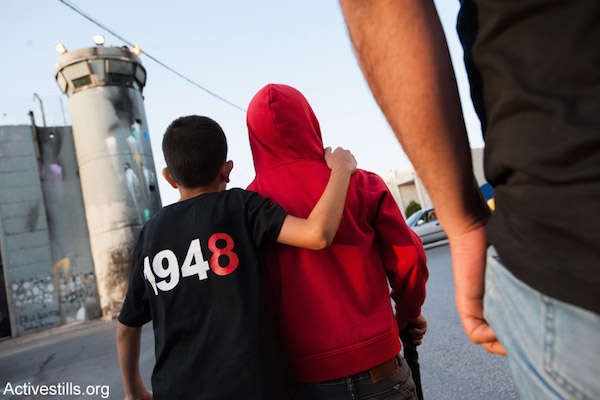 Palestinians in Bethlehem are seen in front of the separation wall on Nakba Day, May 14, 2013. (Ryan Rodrick Beiler/Activestills.org)

Late last month, the State Department announced it would end all funding of the United Nations Relief and Works Agency (UNRWA), the UN agency that provides many essential services for Palestinian refugees in the West Bank, Gaza, Jordan, Lebanon, and Syria. The reaction to this decision has been mostly negative.

These are all important concerns. But none of them hits the mark of what the Trump administration—apparently at the urging of Israeli Prime Minister Benjamin Netanyahu, without any consultation with anyone else in the Israeli government or defense establishment—is doing. This is not merely an attack on UNRWA, as serious as that may be. This is an attempt to destroy the Palestinian national movement.

As I have long argued, the biggest single issue in the Israeli-Palestinian conflict since 1948 is not Jerusalem, settlements, borders, or even security. It is the Palestinian right of return. It is the one issue Israel would not discuss in talks and Israelis, with very few exceptions mostly on the far left, will not even consider compromising on.

It is also the very basis of the Palestinian national movement since 1948. For seven decades, the Palestinian right of return has been the irresistible force meeting the immovable object of Israeli nationalism. It has been the time bomb that would explode if talks on all those other issues were ever successful.

The right of return continued to smolder on its long fuse while diplomats from Israel, the U.S., Europe, and elsewhere sat comfortably with their belief that the Palestinians would simply accept their permanent exile. That this would be an Israeli position is acceptable, in the sense that one side or the other can come to the table with their own view of what is right and just. But as a pre-determined outcome it was never going to work, for the simple reason that a diktat on an issue of such importance would naturally inflame tensions, not resolve them.

Trump has not reversed policy, as some have said. Rather, he has shoved policy in the direction it was leaning before. Consider the words of Dan Shapiro, who was Barack Obama’s ambassador to Israel. Shapiro tweeted: “I’m 100% for being honest [with Palestinians] that there will be no right of return or any other outcome that undermines Isr[ael] as a Jewish state. I’m also for being honest that the conflict can only end in 2 states [for] 2 peoples.”

As analyst Lara Friedman pointed out, it’s “[h]ard to be [a] credible steward if US has already decided [an] inevitable outcome—one defined not through give and take of negotiations but through US deciding what is necessary for Israel and what Palestinians can/must accept.”

Trump is taking that idea to a reckless and callous extreme. Friedman also noted that “Trump and his team’s core positions/goals vis-a-vis [Israel-Palestine] have been coherent and consistent since before Trump took office. Every devastating action that has flowed from them has been predictable and predicted.”

Whether it was his abandonment of the two-state solution with no alternative (allowing Netanyahu’s policies to fill the void), his turning a blind eye to settlement expansion, moving the U.S. embassy from Tel Aviv to Jerusalem, his parroting of virtually every right-wing Israeli talking point, or his relentless attacks on UNRWA, Trump has steered his policy on Israel-Palestine down a clear path. He is motivated by the right-wing belief, undoubtedly held by Jared Kushner, Jason Greenblatt, and his ambassador to Israel, David Friedman — Trump’s “Mideast peace team” — that contrary to conventional wisdom, the Palestinians can be pounded into submission.

Trump and his staff 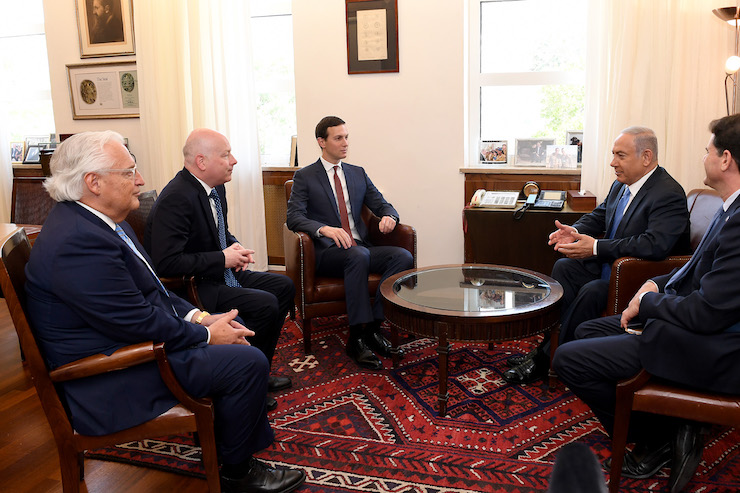 Part of the problem with the Trump administration is that the president himself will make bold, often outlandish statements that have a powerful effect on policy, but his senior staff is working on something else. So, when Khaled Elgindy of the Brookings Institute tweeted that, “Unlike past US [administrations] for whom stability, security and even moral obligation were all mitigating factors, Trump’s approach to [the Israel-Palestine] conflict [is] driven entirely by ideology [and domestic political] considerations,” he is correct, but that may not be the whole story.

Kushner, Greenblatt, and Friedman each have been involved with right-wing pro-Israel movements for a long time. Although those movements are certainly ideologically driven, they are also strategic in their approach. These movements have opposed Oslo and the whole idea of negotiations because they believe that the diplomatic track is based on a false premise: that force cannot decide the outcome of this conflict.

The Israeli right and its U.S. counterparts understand very well the power imbalance between the Palestinians and Israel. They believe that they should crush Palestinian national aspirations and that Israel can weather the Arab and global reaction until it eventually subsides. Trump’s policies have been directed unerringly at that outcome.

Elgindy’s observation is important. Trump wants to please Republican mega-donor Sheldon Adelson and to be able to sell a story to his base that he resolved the Israel-Palestine conflict. If he does so by smashing the Palestinians, it is unlikely that his base will be concerned about that. But that’s neither policy nor strategy.

The troika of Greenblatt, Kushner, and Friedman, however, are pursuing a strategy. They hope it is one that can be supported, even if only in secret, by Saudi Arabia, Egypt, the United Arab Emirates, and anyone else they can bring along. They believe that they can impose conditions on the Palestinians that leave them nothing to fight for and then buy them off with an economic package that stabilizes their economy and improves it to the point that they will be quiescent about their lack of independence. Life will “get better,” as U.S. Ambassador to the United Nations Nikki Haley put it.

All the Palestinians have to do is agree to live under occupation and accept their fate quietly. The Trump team seems not to have considered that if the Palestinians could be forced to do that, they would have acquiesced sometime over the past 70 years.

Trump takes it to the next level

In 2003, President George W. Bush gave a letter to Israeli Prime Minister Ariel Sharon that stated that Israel would not be expected to return to the 1967 borders nor would it be expected to allow Palestinian refugees to return to the lands that constitute the state of Israel proper. So, Trump’s actions in determining what had been agreed on as “final status issues” by diktat are not unprecedented. Trump simply took them much further. He removed the two-state framework, made it clear that settlement growth was an Israeli prerogative, “took Jerusalem off the table,” and now is aiming at the refugees.

That pretty much covers it all. There will be nothing left to negotiate. And this is Washington’s doing, not Israel’s. Although Netanyahu clearly pushed for this, and very likely lit the match that set it off, these are entirely U.S. actions. Indeed, most of the Israeli government and braintrust were left completely outside of these deliberations, very likely because even much of the Israeli right would not be on board with such a reckless approach.

The plan can’t work. It may well lead to violence, which Israel is no doubt ready to suppress with an iron fist. It will certainly increase Israel’s isolation from the more liberal or pro-Palestinian corners of the world. But Israel is prepared for this, as Netanyahu has cemented Israel’s relationship with right-wing forces in the United States, Europe, and elsewhere.

Eventually, however, the distaste Israel is creating for itself will have serious consequences. Republicans will not control U.S. politics forever, and the disgust at Israel’s handling of the occupation is creating great antipathy toward it in much of Europe and among liberals — even pro-Israel liberals — in the United States. In the Arab world there has never been a starker separation on the question of Palestine between leaders like Egypt’s Abdel Fattah el-Sisi and Saudi Arabia Mohammed bin Salman and the people they are ruling over.

Palestinians may be facing a new kind of catastrophe, one that will take another awful toll on them. But they’ve already survived two of them. They may not have flourished, but they have survived and multiplied. Trump’s effort to destroy the Palestinians as a nation won’t succeed, but it will certainly have terrible consequences. After it fails, it will fall on the United States and Western Europe to finally live up to their responsibilities and use their considerable levers of influence to protect the rights of Palestinians as assiduously as those of Israelis.