When everyone believed Clinton was going to be the next president, Obama was rumored to be considering several last-minute options to advance Israeli-Palestinian peace. All that went out the window on Tuesday. 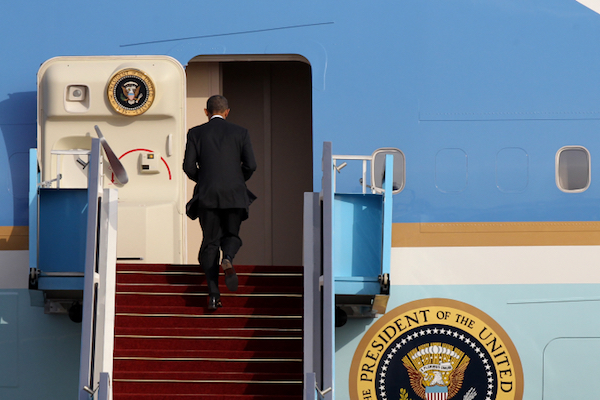 U.S. President Barack Obama boards Air Force One at the end of a visit to Israel. (Miriam Alster/Flash90)

The Obama administration is probably trying to figure out how to protect its two signature achievements – Obamacare and the Iranian nuclear deal – for the next two years, when the White House and both chambers of Congress will be under Republican control. But it will also need to revisit other issues, such as a widely discussed final move on the Israeli-Palestinian issue. Specifically, the idea of laying out parameters for a final status agreement – either in the form of a major policy speech or via a UN Security Council resolution – might seem out of touch with the new political reality in Washington.

It is extremely difficult to predict what Donald Trump’s actual policies will be – common wisdom is that a weak and poorly informed president depends on the people around and below him – but it’s a pretty safe guess that Trump won’t continue efforts to broker a final agreement on a two-state solution. The GOP removed the very idea of Palestinian statehood from its platform ahead of the elections. Those around Trump have taken positions in favor of West Bank settlements and against previous efforts to push the Israeli government towards a deal with the Palestinians. Others in the president-elect’s circle – probably including Trump himself – have strong isolationist tendencies.

All that should cause the outgoing Obama administration to change its calculations. Much of its thinking on a final push on the peace process was clearly predicated on the assumption that Hillary Clinton would be the next president. The idea was not that a major policy speech or a UN Security Council resolution on parameters would generate an immediately response on the ground. It might, however, have laid solid groundwork for future negotiations, all while creating options for the next administration that relieved it of the need to spend actual political capital on the issue.

This thinking was problematic to begin with. The last attempt to set parameters, by Bill Clinton during his own lame duck period, did nothing to prevent violent escalations on the ground. The Clinton Parameters had little significance when talks did eventually resume in Annapolis, and the same was true in the most recent negotiations led by Secretary Kerry. Prime Minister Netanyahu simply refused the American terms of reference, and Kerry didn’t insist. The framework that Kerry did end up negotiating wasn’t as far reaching as the original parameters (especially with regards to Jerusalem), and one could argue that locking it in now in the form of a policy speech or Security Council resolution would have actually been a step backwards, not forward.

All that is meaningless now, however. The old peace process is officially toast. The people who led it won’t be part of the next administration. The policies they pursued are the furthest possible from a Trump administration’s agenda — be it isolationist or neo-con/interventionist. A final push on parameters would be a waste of political capital, and might actually cause more harm than good.

That leaves Obama with one play, and one play only – a Security Council resolution against the settlements. In practice, all it would require of the Obama administration would be to not veto a resolution similar to the one it blocked in 2011. Back then, Washington stood alone in opposing a resolution drafted using language the State Department itself used to condemn Israeli settlement activity, and was supported by Israel’s allies like Germany and Great Britain.

Washington justified the 2011 veto with what it said was the need to sustain or maintain the requisite conditions for direct talk between the two parties. But everything has changed since then: the talks collapsed and will not be resumed, and the next administration is expected to support the settlements, perhaps even moving the U.S. embassy to Jerusalem. In Israel, the settlers are sensing a “rare window of opportunity.” They are advancing legislation to legalize outposts build on Palestinian land, and are calling for the annexation of Ma’aleh Adumim, the third-largest settlement city in the West Bank. I have actually never seen such excitement among the Israeli Right about a new American administration. Immediately after Hillary Clinton delivered her concession speech on Wednesday, senior Israeli government minister Naftali Bennett declared that as a result of Trump’s victory, the two-state era is over.

A new Security Council resolution, however, could help end Washington’s monopoly on the issue and give the international community a new mechanism for containing and confronting Israeli settlement activity. It would signal that there is no vacuum of engagement with the conflict, and that nobody – not even Trump – can give Netanyahu a blank check. It would make the Israeli government think twice before carrying out some of its more far-reaching plans, and thus reduce the potential for violence on the ground.

True, a settlement resolution might not carry the same strong “legacy” component that parameters might have delivered the outgoing administration, but that was a bad idea to begin with. There was never any real hope that Obama could achieve in his final two months in office something that didn’t work over the previous eight years. In any case, everything changed Tuesday. But the administration can still get something done. If a Security Council resolution leads the international community to effectively engage with reality on the ground, it might prove to be more consequential than any other option on the table.