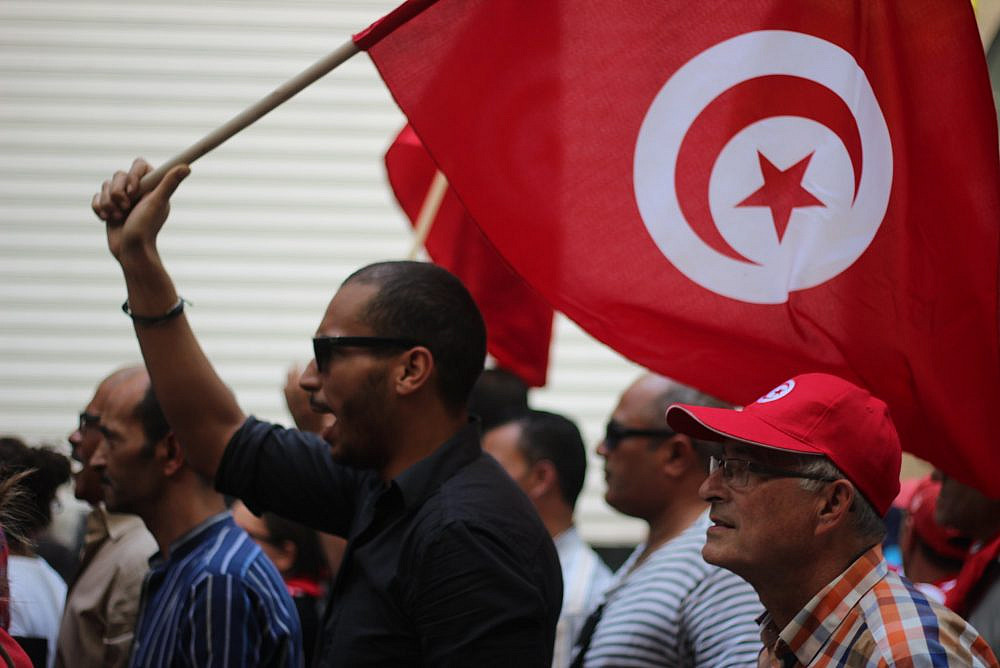 As uprisings for Black lives spread around the world following the killing of George Floyd by a Minneapolis police officer at the end of May, dozens of people took to the streets of the Tunisian capital as well, to protest anti-Black racism — a long-time taboo in the country. Black Tunisian activists have taken to social media since the Black Lives Matter protests began to express solidarity with Black communities in the United States and their fight against police brutality, but also to draw attention to their own struggle against discrimination and marginalization by the Tunisian state.

The June 6 action featured representatives from 31 Tunisian groups, with Mnemty, the most high-profile Black Tunisian organization, among the main organizers. It was markedly more diverse than previous anti-racism demonstrations in the country, drawing many non-Black participants who came to support Black Tunisians, some of whom are descendants of enslaved people, and sub-Saharan Africans. It also stressed the necessity of allyship for Black Tunisian activism to gather momentum if it were to become a force of change to be reckoned with, and fed many Black Tunisians’ hope for dignity in post-revolution Tunisia.

Nonetheless, there is a popular assumption among some Black Tunisian rights activists that Black Tunisians haven’t fought enough for their rights and recognition as equal citizens. There is no single explanation for the reluctance to respond to the systemic violence and racism directed against Black people in Tunisia, as well as in the rest of the Arab world.

One significant complicating factor, however, is the history of slavery in the region, which remains a highly contentious social and political taboo. Slavery was abolished in what is now Tunisia — then a regency under Ottoman rule — in 1846, making it the first Muslim country to do so. Yet the Tunis regency failed to integrate Black Tunisians as fully equal citizens. Freed slaves, mostly in the south of the country, continued to face discrimination and social and economic marginalization — a legacy that persists today, with the disproportionate presence of Black Tunisians working in mostly menial jobs, and subject to a system of patronage under the descendants of their former masters.

Even after Tunisia won independence from French colonial rule in 1956, subsequent governments continued to deny racism — an attitude that continues to be the norm. Since the 2011 Tunisian revolution, in which protesters deposed dictator Zine El Abidine Ben Ali, many Black Tunisian activists have mobilized to reaffirm their citizenship and their racial heritage in a country that has often made them invisible in the public space.

Despite this legacy, and while resistance may not have taken the form of structured grassroots organizing, Black Tunisians have often pushed for some form of visibility — especially through culture.

As with African-Americans’ use of spirituals — a religious musical genre with roots in the slavery-era American South — to resist the power of the oppressor, Black Tunisians have longstanding musical traditions that represent their cultural experience — among them Stambeli, Abid Ghbonton’s tayfa band, Jerba drum bands, the Sufi-inspired Banga and Issawiya rituals in the southwest oasis towns of Kebili and Nefta, and the drum dancing troupe of Gougou Zarzis.

These cultural forms trace their origins either to the slave past of Black Tunisians — as with Stambeli and Banga, two highly spiritual ritual dances with West African origins (Central Africa, Nigeria, Niger) — or to Black indigenous Tunisians in the oasis area near the Algerian border on the edge of the Sahara Desert, where dark-skinned Tuaregs and their predecessors have lived for at least 10,000 years. 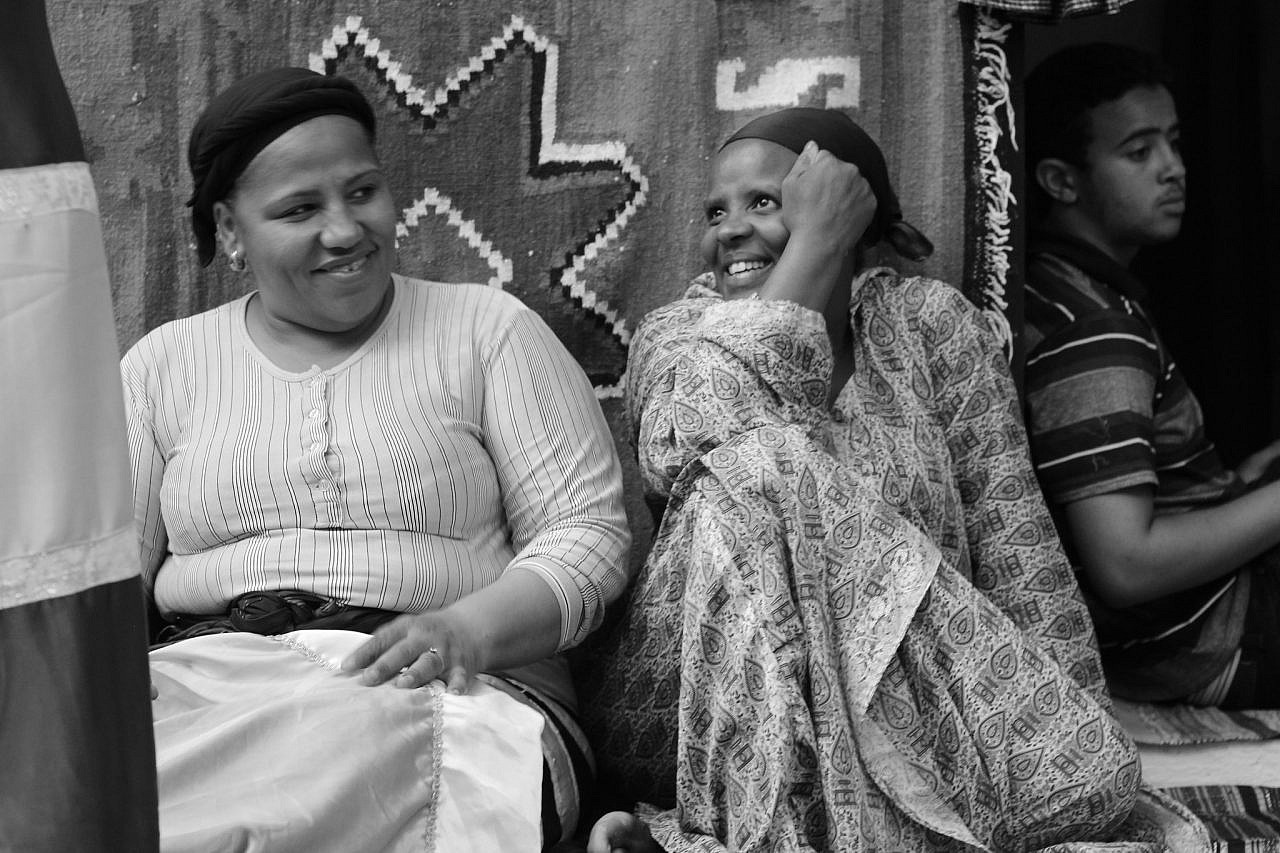 This past is also invoked in the language used in some of these musical forms. For example, Stambeli trance dancers sing in a non-Arabic language known as ajmi, in reference to languages spoken by West African slaves from Bornou, and the Hausa and Kanuri languages of Nigeria. The use of alternative languages also represents a form of resistance, with a disempowered group using codes to make their actions invisible or unintelligible to their oppressors.

Slah Mosbah, Tunisia’s most famous Black Tunisian singer — who is popular throughout the Middle East — has been a symbol for many in the country, with songs focusing on love of the homeland and other patriotic themes. Despite this status, however, Mosbah has expressed bitterness at the racism he faced during his artistic career, pointing out that he has been discriminated against or “exoticized” because of his skin color.

He has also denounced the racist attitude of the media and of Tunisian society in his songs, while often being accused of being “paranoid” and “arrogant,” and of “suffering from a minority complex,” according to the Italian anthropologist Marta Scaglioni in her recent book, “Becoming the ‘Abid: Lives and Social Origins in Southern Tunisia.” During the Tunisian revolution, Mosbah protested in front of the Tunisian Interior Ministry, calling for then-president Ben Ali’s departure; later, he recounted being beaten by police and racially abused.

Mosbah’s son, Sabry, followed in his father’s footsteps, becoming a singer in France and playing before audiences in Europe and North America. Black Lives Matter Tunisia has called his songs “a cry in the face of oblivion and racism.”

Yet further examples of cultural resistance include the work of Black Tunisian slam poet Anis Chouchene, rapper Hamza Ben Achour, and graffiti artist Jawher Soudani, all of whom shot to fame after the 2011 revolution, and who represented the repressed voices of Black Tunisian youth.

Although the pace of change has been slow, the long history of Black Tunisian cultural resistance, as well as grassroots pressure, has made some inroads against racism — the most visible of which is the civil society push that in 2018 led the Tunisian parliament to pass a law criminalizing racial discrimination, the first such legislation in the Arab world.

The recent BLM protests are the latest example of how post-revolutionary Black Tunisian activism has brought repressed issues of race and racism to the surface. Now, the work of urgently integrating anti-racism into the civil society agenda continues — as part of a broader struggle to ensure Tunisia’s ongoing transition to a more democratic, egalitarian society in which equal rights for minority populations (including Jews, Amazigh, LGBTQI and other groups) are upheld.