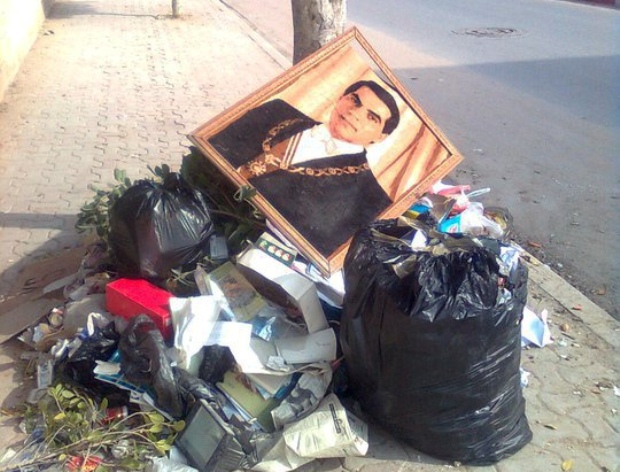 Second, Palestinians often view themselves as an oppressed people, suffering not only at the hands of Israel but also under their own elite leadership.  The Palestinian president, for example, is hardly a common man.  Mahmoud Abbas and his family are quite wealthy.  Thus the struggle of a people for liberation as seen in Tunisia is a theme that resonates strongly in the Palestinian narrative.  An advancement of one, the argument goes, is an advancement of all.

As a whole, regional leaders concerned about self-preservation and maintaining the status quo have reason to be nervous.  In Amman on Sunday, 3,000 unionists, Islamists and leftists staged a sit-in outside the Jordanian parliament, protesting the government’s economic policies.  Mohamed Bouazizi, the 26-year old Tunisian whose self-immolation in December sparked the demonstrations in the country, was also responding to economic policies (among other things).  He was prohibited from selling vegetables without a permit, and one month later his president was flying through the region looking for a place to land.  In Egypt this week, both in the capital Cairo and in the northern port city Alexandria, two men set themselves ablaze in an act of protest.   And at least one facebook group is calling for large scale protests in the country next week.  There have been similar acts in Algeria and Mauritania.  And in Bethlehem, during a radio talk show on the Ma’an Network, a youth reportedly threatened to set himself on fire, inspired by what he saw in Tunisia.

In Ramallah, the PA’s response to developments in Tunisia was muted at first.  That much could have been expected; Arafat and Abbas had homes in Tunis when the PLO was based there, and the two maintained very close ties to the ousted Tunisian leader, Ben Ali.  But sensing popular support in the Palestinian street for the Tunisian uprising, just days ago the Palestinian Prime Minster Salam Fayyad (a former World Bank official) rushed to brief Palestinian journalists on the thriving local economy.  The numbers might be in his favor.  Indeed, the Palestinian economy in the Occupied West Bank is doing well.  And while the price of basic goods has risen, so too has per-capita income.  Still, nearly a quarter of a million Palestinians are without jobs.  The PA’s itself employs 150,000 people.  And the number of people on welfare has risen fifty percent.  Netanyahu has repeatedly spoken of “economic peace,” meaning Israel should help build an economic infrastructure in the Palestinian territories.  So he could do more to help.  He could respond to Fayyad’s plea to allow for Palestinian projects in Area C, the approximately sixty percent of the West Bank that is fully under Israeli military control.  Fayyad believes, rightly, that such a move would create more jobs for Palestinians, many of whom ironically resort to gigs as settlement construction workers.

The situation is perhaps more urgent than some, like Fayyad and Netanyahu, would have you believe.  Just this week Josette Sheeran, the head of the UN’s World Food Program (WFP), the international body tasked with feeding the hungry population in the Occupied Palestinian Territories, warned that its budget was short billions of dollars.  A hungry people, she predicted, “have only three options – they revolt, they migrate, or they die.”  A Palestinian leadership concerned with survival should be worried about the first one; an international community concerned about doing the right thing should be alarmed by all three.  But the people are hopeful.  As one demonstrator from Wednesday’s “Palestinian Solidarity With the People of Tunisia” rally told me, “It’s not the beginning of the end.  It’s the beginning of the beginning.”