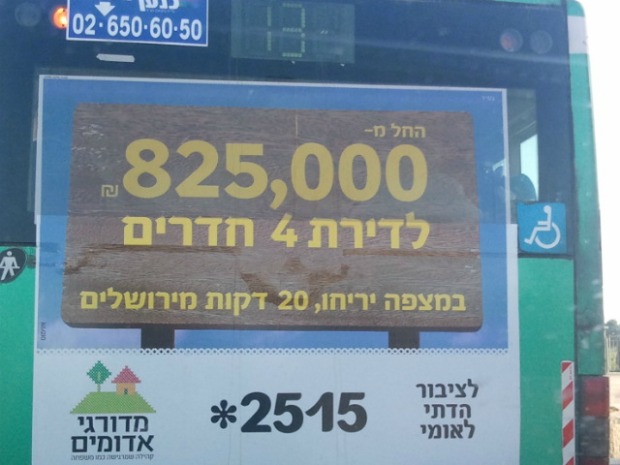 It never ceases to amaze me how in everyday life seemingly innocent and benign artifacts actually indicate the insidious. For instance, the simple navigation of the streets of Jerusalem brings one in direct contact with an advert glaring down at you from the back of an Egged Bus (Egged recently won a lucrative public transport contract in Amsterdam). Drive through the settlement of Ma’aleh Adumim and see all the “for sale” signs posted by international real estate agencies. Occupied territory is up for sale while peace gets put on the auction block for the lowest bidder. Maybe the Americans will buy, maybe the French. What is clear is that there is a price tag on peace and justice and the only ones paying the exorbitant costs are Palestinians.

Take also the insidious and ubiquitous stencils stating “Kahane tzadak (Kahane was right)” or the publicly placed posters offering tours of Hebron for the Jewish Holidays, or visits to “Judea and Samaria in order to get back to your Jewish Roots…” A frequently seen bumper sticker claims that these illegally occupied territories are “the story of every Jew”. Well, they are a story. A horror story, especially for Palestinians under occupation who have to sit about and watch while Jewish Israelis use their land for an amusement park or some sort of archaeological tourist trap in occupied East Jerusalem’s Silwan village.

What does this mean, particularly in light of the pointless speeches by Israeli Prime Minister Bibi Netanyahu in Washington DC last month? Bibi has officially declared the start of a “going out of business” sale for peace. Peace is being liquidated. How else can one explain his empty rhetoric about being willing to make generous and painful compromises (as if to say that giving back stolen property, at a cost, is generous and not extortion) for peace while Palestinian land continues to be the market place for occupation profiteers?

The bus advert is but one of many instances where Israel says one thing but its conduct says the opposite. Apartments in settlements are on sale, new settlement projects with apartments for settlers are getting started in East Jerusalem and the Israeli government just announced a new initiative to “invest” 105 million dollars in “developing” Jerusalem. One can be sure that this is meant to develop an Israeli occupied and “united” Jerusalem.

In the meantime, the only thing really united in Jerusalem is oppression that is celebrated by settlers and their supporters while those who demonstrate against the creeping if not present apartheid are beaten by the police. Meanwhile, the entire settlement enterprise looks on in satisfaction as the State of Israel builds their homes, guards their enclaves and essentially takes water from the poor and gives it to the privileged (and apparently not in the OPT only, Bedouin residents of the Negev also enjoy this special Israeli treatment).

It seems that Bibi is just waiting for the price of peace and justice to dip so low so as to make them worthless commodities.

Louis Frankenthaler lives in West Jerusalem with his family.  He is a human rights worker and doctoral student.