The hope of having a presidential candidate who advocates for genuine change vanished on Sunday, and reality slapped us in the face. We now have to choose between a cheery capitalist and a fascist with a shark’s smile. 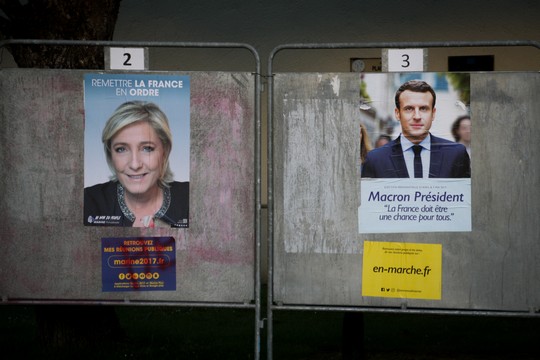 PARIS — Some traditions are meant to be kept intact. In spite of technological improvements, the announcement of the French presidential election’s first round results hasn’t changed a bit. At exactly 8 p.m. on election night, the faces of the two contenders qualified for the final round appear on the TV screen and are usually welcomed with screams of joy or disappointment. Not this time.

This time my friends and I remained silent. Neither cheer nor sorrow were heard in the entire neighborhood. There was only the silence of resignation. Contrary to what happened in the U.S. with Trump and the UK with Brexit, the polls and predictions in France turned out to be true: the faces which appeared on our TV screen were those of Emmanuel Macron and Marine Le Pen.

Neither of the usual ruling parties — Les Républicains (LR, conservatives) and the Parti Socialiste (PS, social-democrats) — made it to the second round. A political earthquake? Yes and no.

Looking at the outcomes of the previous elections, Marine Le Pen’s finish and accession to the second round is not exactly a surprise. In vote after vote over the past few years her rise has been steady. The only thing that was unclear was whether she would manage to end up first, which she failed to achieve. Her statement exonerating France’s responsibility in the gathering of thousands of Jews at the Vel d’Hiv Hippodrome, and their consequential deportation to the death camps, undercut her efforts to clear her party of justified anti-Semitism accusations. In today’s France, not all racism is equal. Anti-Semitism can cost you votes; Islamophobia wins them. That’s the sad state of affairs.

Emmanuel Macron, unknown to the French public only three years ago, is now the enfant chéri de la République. Without campaigning under the label of a party, he launched his political movement claiming to belong neither to the Left nor the Right, but surely anchored within the neo-liberal project and designed to further implement the labor market’s structural reforms he implemented as François Hollande’s minister of economy. Can we then truly speak of an earthquake? If he wins, which will most likely be the case, what we will get is nothing else but more of the same.

Not making it to the second round of voting, flirting with 20 percent of the vote, Jean-Luc Mélenchon (France Insoumise, left-leaning and independent political movement, backed by the components of the Front de Gauche) gave the Left the type of performance nobody expected. Taking inspiration in Ernesto Laclau and Chantal Mouffe’s concept of left-wing populism, Mélenchon successfully targeted “the people” on the basis of a progressive program but without clear references to the Left. Polls indicated his meteoric rise in the final weeks of the campaign, making him the de facto candidate to order to oppose the far-right, the radicalized right-wing and the neo-liberal center, and to engage in a profound change based on popular sovereignty, social justice and ecological planning.

Mélenchon’s campaign was incredibly dynamic and energizing. But as a Jewish anti-racist activist, even one who voted for him, I felt uncomfortable — to say the least — with some elements of his political strategy. Left-wing populism is about declaring the old Left/Right cleavage clinically dead and fostering the idea that the people should unite against the oligarchy. Why not. After all, we just had a government claiming to be socialist yet implemented an anti-social and freedom-destroying agenda. But why is it necessary to raise French flags and sing the national anthem at every meeting? Why should any of that prevent a critique of deeply rooted institutional racism under the pretext that “our France is generous and bigger than this?” Why does it require being silent in the face of Islamophobic laws?

I decided that I would rather participate in demonstrations against these critical flaws in a France ruled by Mélenchon than protest them in addition to all the aggressive neo-liberal and nationalist measures the other contenders would surely implement. Many of my Jewish comrades did not make this choice, and voted for the New Anticapitalist Party candidate Philippe Poutou, who didn’t manage to get even 2 percent of the vote. I don’t blame them: I understand their reasons. But the fact that Mélenchon was the only progressive candidate who stood a chance with a clear and positive stance on BDS also played a role in convincing me. Contrary to many other candidates, he opposes the criminalization of the BDS movement and is vocal against Israel’s violations of international law.

But on Sunday evening, the hope of having a candidate advocating for genuine change in the presidential election’s final round vanished, and reality slapped us in the face. We now have to choose between the cheery capitalist with a cute face and the fascist with a shark’s smile. For the Left in general and the anti-racist movement in particular, the following questions are burning each and everyone’s lips: what shall we do in two weeks? Vote for Emmanuel Macron to ensure Marine Le Pen loses? Abstaining from voting, thus taking the risk of seeing her move into the Élysée Palace? Wouldn’t five years of “more of the same” politics ultimately lead to a far-right victory in 2022?

I have to be honest with myself. My privileges as a white male — Mizrahim are part of the white group, here in France — allow me to consider voting “neither for the pest, nor the cholera.” Frankly, I don’t know whether I’ll vote two weeks from now. What you have to understand is that all those responsible for Marine Le Pen’s rise over the past years, all those who betrayed popular classes and left them in disarray, and now calling on the Left to vote against fascism. Who the hell do they think they are? At least in a France led by Macron there won’t be a risk of civil war, only a class one. While in Le Pen’s France, you can bet we’ll end up with both.

Maxime Benatouil is a member of the national board of the French Jewish Union for Peace (UJFP), an organization active in the anti-racist movement and in the BDS France Campaign. A version of this article also appears in Hebrew on Local Call.