The two men have refused food for two months. Israel’s top court froze their administrative detention (imprisonment without charge or trial) until their health improves, but Ahmad Abu Farah and Anas Shahid say that’s not enough. 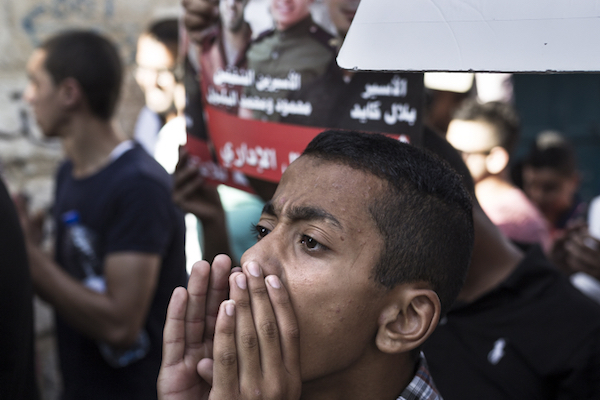 A Palestinian teen at a protest in solidarity with hunger-striking Palestinian prisoners in Israel, September 13, 2016. (Sebi Berens/Flash90)

Two Palestinian men being held by Israel under administrative detention, imprisonment without charge or trial, have reached a life-threatening stage in their hunger strikes.

Ahmad Abu Farah was arrested on August 2, and Israeli military authorities issued an administrative detention order against him several days later. The vague Israeli accusations against him are that he is an activist with Palestinian Islamic Jihad, and that he poses a danger to the area.

Shadid was arrested a day before Abu Farah, was interrogated about several Facebook posts he published, and after Israeli authorities decided not to charge him with a crime they decided to put him under administrative detention. The accusation against him is that he is involved in “violent terrorist activities,” as Supreme Court Justice Uzi Fogelman phrased it.

Shadid and Abu Farah both reject the accusations against them.

Administrative detainees, by virtue of not facing a formal indictment or trial, have no opportunity to defend themselves against the state’s accusations. Often times they have no idea what the specific accusations are, or from what incident or activity they stem. Administrative detention orders are valid for up to six months, but can be renewed indefinitely.

The two men’s medical condition has seriously deteriorated over the past few days, according to Hadad, who said they are drinking only water and refusing all food and supplements. They both have been occasionally losing consciousness and are suffering from severe pain, muscle loss, and loss of vision.

Abu Farah is suffering from sharp stomach pains, and Shadid’s heart has become irregular and is starting to lose liver function, Hadad said, adding that doctors have warned there is a real and immediate risk to their lives.

In a response to the High Court petition the two filed, Israeli authorities said they do not oppose freezing their administrative detention orders as long as they remain in serious medical condition.

That practice, of freezing administrative detention orders in an attempt to end Palestinian prisoners’ hunger strikes, has become a common response by the Israeli courts and security services in the past year or so. The state’s logic, it seems, is to give the impression that they are making a concession to the prisoners, that they are no longer in administrative detention and that they no longer pose a threat in their current medical state, but the moment they recover the detention order is reinstated.

Justice Fogelman wrote as much in his decision in this case:

There is no disagreement that the petitioners’ medical condition is very bad and that they are in real danger of death. But it is clear, and the respondents also agree, that under these circumstances the petitioners pose no danger at the current point in time. Therefore, the preventative aim that forms the basis of their arrest does not exist at this time and the continuation of the detention orders cannot remain unchanged. At the same time, we don’t find it appropriate to order the cancellation of the administrative detention orders.

“The two prisoners reject [the freezing of their detention orders] because they say it only sidesteps the problem and doesn’t deal with it,” explained Hadad. “During the course of the hearing, Justice Fogelman asked me why they object, considering that [freezing the order] is like canceling it, and I told him that if it is like canceling it — then cancel it. They want a full cancellation of [their] administrative detention.”