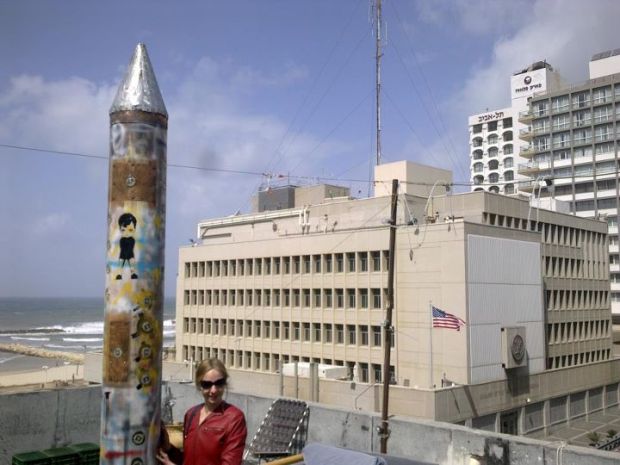 Artist Anna Appel next to 'Nimrod Direct' by Guy Briller at the 'Iran' exhibition in Tel Aviv. In the interest of peace, the missile was turned away from the Embassy (seen in background) and towards the sea.

Creators of “Iran – The Exhibition,” a new art project at The Spaceship gallery in Tel Aviv, wanted to examine “Israeli hysteria and fear of destruction, and the never-ending quest for a new Hitler-Nasser-Saddam.” Among other works, the exhibition includes a miniature missile (made of an empty pipe). It was placed on the roof of the gallery, which incidentally, overlooks the American Embassy in Tel Aviv. What followed was a form of inadvertent performance art.

On Wednesday, no less than five members of the Embassy’s security team, accompanied by a soldier, entered the gallery, saying that if the missile – a work titled Nimrod Direct, by Guy Briller – is not removed, the police will be alerted. Roy Arad, one of the organizers of “Iran – The Exhibition,” explained that it was only an empty pipe, covered with drawings and shiny stars. Later, he offered to move the Nimrod 10 degrees to the left, away from the Embassy and towards the sea. This offer seems to have calmed the security team.

Yet someone at the American security team must have remained on high alert, because on Thursday, two police officers arrived at the exhibition, following a complaint from the Embassy. They examined Nimrod, and after concluding that “this thing will never fly anywhere,” left. According to Roy Arad, they appeared to have enjoyed the art.

It seems that “Iran – The Exhibition” has already succeeded in saying something about Israeli-American security paranoia, and the  existential threat that even a painted pipe can pose.

In the text introducing the exhibition, the organizers write:

In many ways there is actually no need for Ahmadinejad the current hero of our psychosis. Short and unshaved, he is no more than a provisional extra, stepping in for his predecessors, they too, no more than short substitutes with facial hair. Any existence involves a threat, and any threat is no less than a threat to our existence. The scale of the threats proves it unequivocally – a stone hurled at us, an improvised pipe fired at us – all these are swiftly compared by politicians to atom bombs and extermination ovens. IDF jet fighters will be forever bombing trains leading to Auschwitz. The apocalypse is always already here – and all we require is an excuse.

Ironically, the game works both ways: Israel is the “Iran” of the Iranian junta and other states in the area, and is used by their rulers to stop social and political reforms. As they say in business: it’s a win-win situation. The exhibition “Iran” is a phosphorescent stop sign, a moment before war with Iran.

“Iran – The Exhibition” opens tomorrow (Saturday, March 17) evening at 8.00 PM. The opening event will include poetry reading and a short performance by +972’s Yuval Ben Ami.