Next month, the Palestinian non-violent resistance movement will take center stage at an art gallery in New Mexico. Mati Milstein, an Israeli photojournalist, has spent the last year documenting the activities of a group of women activists fighting the occupation. He discusses “Nesa’iyéh (a woman thing),” his exhibition of their struggle as depicted through his lens, in an interview with Noa Yachot. How did you get involved in the project?

I was in downtown Ramallah on March 15, 2011, photographing Palestinian demonstrations calling for unity between disparate political factions. I noticed that many of the protest leaders were, in fact, women. Though I did take note of this unusual fact, it initially remained filed somewhere in the back of my head. As the following weeks passed and I continued to photograph Palestinian protests in the West Bank, I realized I was seeing the same women – week after week – that I had seen at that protest in Ramallah.

I began talking to them, trying to get a grasp of this new and unusual image (at least new and unusual to me) of women leading men in Palestinian street protests. Eventually described by the international media as the “March 15th” group, these women (together with their male colleagues) were a very loose coalition of like-minded individuals, non-violent in their strategy and totally independent in their political affiliations. In parallel with photographing their political actions, I also sat and listened to them, attempting to educate myself and understand their approach and objectives: eliminating the Israeli occupation, confronting the totalitarian nature of the Palestinian Authority, altering their own place as women in a patriarchal Middle Eastern society.

I was intrigued and quite soon realized that this was something unique in our region that I wanted to document. What do the pictures convey in your eyes?

The Israel-Palestinian conflict is dominated by a very specific sort of visual images: armed soldiers shooting guns, young men throwing stones, tanks, warplanes, flags, suffering. These images are dictated by an accepted and assumed paradigm that dramatically influences our perception of the conflict, of each side party to the conflict, and of the nature of “acceptable” interaction and communication. You rarely see conflict-related images of women – Palestinian or Israeli – unless they are mourning the loss of a loved one or themselves suffering in one way or another. You almost never see strong women, in control of and making decisions about their own fate.

My meeting with this subject matter came, coincidentally, just after reading an analysis by Gila Danino-Yona of photographic news coverage depicting the presumed role and place of women in the Arab Spring revolutions in North Africa. I realized that right here at home, I was witnessing women taking an outspoken and proactive approach to political activity that runs directly counter to the West’s dominant perception of Arab women.

I also realized that I could document Palestinian protests in one of two ways. I could choose to reinforce and maintain the current, ego- and male-dominated paradigm of conflict: you shoot, I shoot back. My gun is bigger than your gun. Or I could choose to allow my own perception to be altered and evolve – starting at the immediate, visual level – and attempt to honestly and accurately capture images of this new paradigm and new approach now being written by Palestinian women. You are exhibiting at an art gallery – is this a political or artistic project?

I have chosen to photograph a subject that is clearly political in nature. But this is an art exhibition. I leave it up to the women to make their own political statements. I am creating art. My intention was to capture and present visual images that cause people to stop and think and, hopefully, reconsider the manner in which they view their world. I want my photographs to shake things up. The West is used to seeing images of Arab women concealed beneath amorphous religious Muslim garb, or otherwise hidden at home, making food and producing babies while their men are out leading the fight. I’d bet most Western audiences aren’t used to seeing Palestinian women (or Arab women, in general, for that matter) dressed in skinny jeans, designer hi-top sneakers, Ray Bans and matching keffiyehs. And I think most audiences might be even more confused to see these same women going head to head with heavily-armed infantry troops and paramilitary police forces.

This incongruity is one of the things that grants the women a certain element of power on the ground. And I think it’s also what grants power to my images. I’m very curious to see how this will be received by a Western audience, when we open in June. How did you choose your subjects?

I didn’t. They chose me. I don’t like to push myself on subjects. If someone doesn’t want to be a subject, if they don’t want to be photographed, then I won’t force them. The more you push yourself on someone, the more the resulting images have to do with you and the less they have to do with your subject. I try to keep myself out of the picture as much as possible. I simply spent time with them. Those individuals who wanted to talk with me, who were happy to be photographed, I obliged. And those who didn’t, I let them be. I am not the subject. They are. 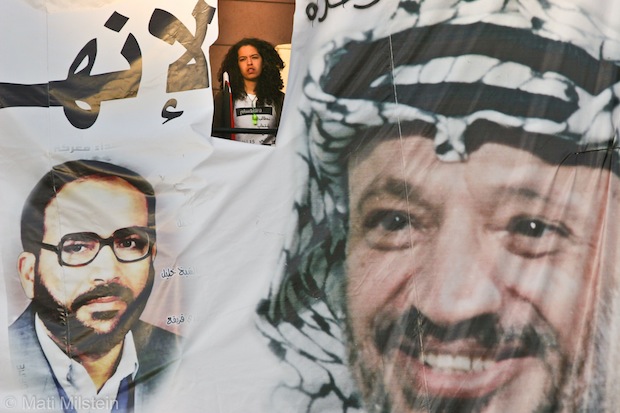 Have you encountered difficulties making this project happen?

As a Jewish Israeli working in Palestine, I have never faced any discrimination from Palestinians. I have never felt threatened. The greatest difficulties I encountered over the past 14 months were, unfortunately, the result of Israeli military actions. Conflict photographers, due to the very nature of their work, often find themselves in the line of fire, caught between opposing sides. This is an accepted risk. However, press photographers – be they Palestinian, Israeli or international – working in the West Bank are frequently targeted directly by Israeli troops. We have been threatened with arrest and shot at with tear gas grenades and various types of rubber and plastic-coated steel bullets. This, clearly, makes it harder to work. Was your position as an Israeli male an obstacle to the project? Has it informed your perspective?

I am an Israeli Jewish man, with all that means in terms of my upbringing, my socialization and my personal history. There is nothing I can do about that. But this needn’t be a deficit. It can be a distinct advantage. I am, for all intents and purposes, the polar opposite of the Palestinian women upon whom this project is focusing. Due to the extreme disparity of our life experiences, I could have condemned this project from the start. But that would be buying into the dominant approach I mentioned earlier that dictates nearly aspect of this conflict, down even to our visual perception of it. Or – and this is what I chose to do – I could simply wipe the slate clean: shut my mouth and open my mind. I had to start from scratch. I didn’t come to argue or to debate. I didn’t come to talk at all. I came to listen and to take pictures. And the best pictures come when you stop looking inward and start looking outward.

What does the name of your project mean?

Project curator Saher Saman and I decided to discard the project’s initial working title – “Palestine: Women First” – as we preferred something in the language of the women activists whose work I have been documenting in photographs for the past 14 months. We wanted Arabic but we weren’t looking for a title necessarily easy for a non-Arabic speaking audience to wrap its tongue around. The project name was the subject of prolonged discussion and debate and numerous options were considered and eliminated for one reason or another. Either the meaning wasn’t exactly right, or the sound of the word itself was not pleasing to the ear. I felt like I was choosing the name for a child about to be born. Throughout this process, we consulted with many of the women whose images appear in the exhibit, seeking their thoughts and suggestions. Time was running short and the options simply weren’t what we wanted. One evening earlier this week, hopeless and at the point where I was prepared to simply give in and stick with the original English working title, I was driving with a friend from Ramallah to Jerusalem. I laid bare to her my desperation, hoping for – at least – some words of comfort. But she turned to me and said “How about nesa’iyeh?” Nesa’iyeh means “feminist” or “a woman thing.” It was love at first sight. I knew, immediately, that this was the project name. It is a name that respects and honors those portrayed in the exhibition’s images, and one that is in line with the cultural and linguistic context in which it was created.