In the last week, things have changed between the U.S. and Israel. Kerry may have the guts to continue refusing to lie for Israel’s occupation – which is all that’s needed to shake its foundations. This is no tiff. 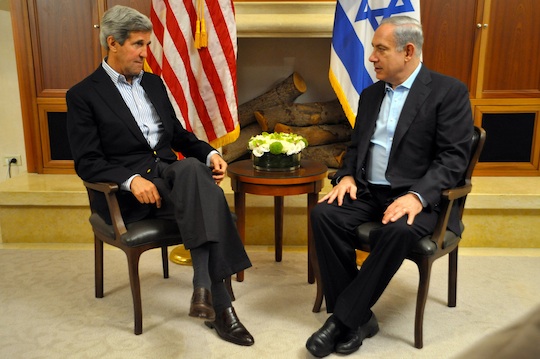 If it hadn’t happened on the same day, last Thursday, that the breakthrough came in the Geneva talks on Iran’s nuclear program, John Kerry’s joint interview on Israeli and Palestinian TV – and the chain reaction it would have set off – would still be dominating the news from the Middle East. Instead, it was a one-day story, overtaken by the chain reaction from the Geneva breakthrough, notably Netanyahu’s furious attempt to block what he calls this “bad deal” with Iran.

If it hadn’t been overshadowed by the Iran story, Kerry’s interview, coming on the heels of a report that the U.S. was going to present an Israeli-Palestinian peace plan in January, would have been seen for what it was: a very high-profile signal that the Obama administration has decided to stand up to Netanyahu, to tell him publicly what it thinks of his policy and to make clear that until he changes direction, the United States views him, not Mahmoud Abbas, as the main obstacle to peace.

I don’t know of a precedent for a U.S. secretary of state, or a president, publicly attacking Israel’s policies toward the Palestinians like Kerry did – and in front of not only the Israeli public, but the Palestinian public as well. Just look at what he said:

I mean, does Israel want a third intifada?

How, if you say you’re working for peace and you want peace, and a Palestine that is a whole Palestine that belongs to the people who live there, how can you say we’re planning to build in a place that will eventually be Palestine? So it sends a message that perhaps you’re not really serious.

I know there are people who have grown used to [the status quo], And particularly in Israel. Israel says, ‘Oh, we feel safe today. We have the wall, we’re not in a day-to-day conflict, we’re doing pretty well economically.’ Well, I’ve got news for you. Today’s status quo will not be tomorrow’s or next year’s. Because if we don’t resolve this issue, the Arab world, the Palestinians, neighbors, others, are going to begin again to push in a different way.

The reaction from Netanyahu’s circles was brief and bellicose: Israel would not “give in to the intimdation tactics.”

This is not the way Americans and Israelis ordinarily talk to each other in public. This is not a tiff. This is not one of the natural ups and downs in the unshakable relationship bla bla bla. This is a break between the U.S. and Israel on the peace process, caused by the secretary of state’s decision to finally speak Washington’s mind out loud.

It was not a snap decision. Three days before, Meretz leader Zahava Gal-On told Haaretz that she was informed by American, Palestinian and Arab officials that if the peace process remained stalled, the U.S. would in January present “a new diplomatic plan that will include all the core issues and will be based on the 1967 lines, with agreed-on land swaps.” Kerry denied the story, saying it was all “rumors” and “speculation,” but in light of his subsequent TV interview – as well as the extreme unlikelihood that Gal-On made the whole story up – it seems the Americans are indeed planning to intervene with a peace plan of their own. It’s the same peace plan that’s been around forever – and it remains anathema to Netanyahu, not to mention the rest of Likud.

The Israeli-Palestinian peace talks that Kerry forced into being in July, and whose allotted nine months run out in March, are guaranteed to fail; this Israeli government will not end the occupation. But if Kerry follows through on this new, confrontational U.S. approach, he will not let Israel off the hook when it comes time to assign blame for the failure – and that would be an earthquake. It would deliver an unprecedented shock to Netanyahu’s Israel, and supercharge the movement for Palestinian independence.

It’s possible, of course, that Kerry will not follow through, that he will back off Netanyahu like Obama and Hillary Clinton did four years ago, letting the peace talks die and blaming both sides more or less equally, which would just reinforce the status quo. But in the last week, things have changed between the U.S. and Israel. They are at open diplomatic war on two fronts, Iran and Palestine. It’s not going to be easy for them to patch up their differences on these issues because Netanyahu is a radical hawk on both of them, while the Obama administration, in its second and last term, appears to be rediscovering its dovish instincts. It’s legacy time, Kerry’s name is on these Israeli-Palestinian peace talks, there’s no love lost between him (or anybody else in the administration) and Netanyahu, and he just may have the guts to continue refusing to lie for Israel’s occupation – which is all that’s needed to shake its foundations.

What’s happened in the last week between the U.S. and Israel is far from being business as usual. This is a rare, hopeful moment.