Yedioth Ahronoth’s Nahum Barnea, Israel’s No. 1 print journalist, has a long interview on Friday with unnamed U.S. officials involved in the Israeli-Palestinian peace talks, giving their view of why they failed. The interview is quite a bombshell, as well as a historic document. (Hours after this post went online, Yediot translated the interview and put it up on its English-language website.)

The quote from the Americans that’s likely to make the most news is this:

It seems we’re in need of another intifada to create the circumstances that will allow for progress.

Afterward Barnea suggested that the interviewees seemed to be wishing for an intifada, and they responded, “The opposite is the truth. It would be a tragedy.” The point they make is that unfortunately, recent history shows that Israeli-Arab peace only happens after war makes it urgent. 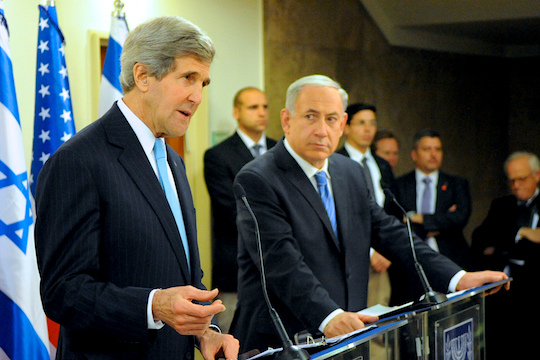 But the real importance of the American officials’ reading of the Kerry peace talks, which Barnea describes as being “as close as can be to an official U.S. position,” is that they place virtually all of the blame for the failure on the Israeli side. They especially blame the announcements of a combined 14,000 new settlement housing tenders, adding that they just learned about a massive expropriation of West Bank land for settlement construction, which sounds like a reference to a recent Haaretz report. “This doesn’t go together with an agreement,” the officials say.

They say they wanted the talks to start last July with a settlement freeze, but dropped the idea after becoming convinced that Netanyahu’s right-wing coalition partners wouldn’t go along with it. Now they realize their mistake:

We didn’t understand that Netanyahu uses these announcements of settlement construction plans to ensure the survival of his government. We didn’t understand that the continuation of settlement construction allows his cabinet ministers to very effectively sabotage the negotiations. There are a lot of other reasons for the failure of the effort, but people in Israel must not avoid seeing the bitter truth – the biggest land mine was the settlements. The Palestinians don’t believe that Israel genuinely intends to let them create a state when it is building settlements on the land earmarked for that state.”

But beyond the settlement expansion, the Americans said the power of Israel’s position and arrogance toward the Palestinians made Israel virtually immovable (except Tzipi Livni, who is singled out among the Israelis as a “heroine”), while it made the Palestinian side extremely frustrated.

In the 20 years since Oslo, a number of facts and rules of the game have become deeply entrenched. This reality is very difficult for the Palestinians and very comfortable for Israel. … One of the Palestinians in the talks said to one of the Israelis: ‘You don’t see us. We’re invisible, we’re hollow.’ There was something to that. After the second intifada ended and the separation barrier was completed, the Palestinians became ghosts as far as Israelis are concerned – they don’t see them anymore.”

Israeli actions over the last 20 years – from the Oslo Accords through the Kerry talks – left Palestinian Authority President Mahmoud Abbas (Abu Mazen) deeply pessimistic, especially about Netanyahu’s intentions, but also about the Americans’ ability to rein Israel in, the officials said.

While we were concentrating our efforts on softening the Israeli side, the announcements of new building plans in the settlements limited Abu Mazen’s ability to show flexibility. He lost his trust. The low point came when Netanyahu said Abu Mazen had agreed that the deal was for a release of Palestinian prisoners in return for settlement construction. That did not square with the truth.

Abu Mazen entered the talks a skeptic. Actually, everyone was skeptical, but his doubts centered on Netanyahu. The Oslo Accords were [Abu Mazen’s] handiwork. He saw how Oslo opened the door to the settling of 400,000 more Israelis over the Green Line. He was not prepared to go along with this any further.”

The Americans go on to cite other Israeli demands that Abbas saw as just a way of continuing the occupation, a view the Americans seem to sympathize with.

Israel presented its security needs in the West Bank: The demand was for absolute control over the territory. This told the Palestinians that with regard to security, nothing would change. Israel was not ready to agree to a timetable – its control would last forever. Abu Mazen came to the conclusion that there was nothing in the agreement of use to him.”

At that point, well into the talks, Abbas grew rigid, the officials say: “The claim heard in Israel, that Abu Mazen ran away from making decisions, is not true. He didn’t run, he simply shut down.”

Barnea asks the Americans what they think of Livni’s current claim that Abu Mazen didn’t budge an inch from his traditional positions, while Netanyahu showed flexibility. The Americans:

It’s true that Netanyahu moved, but he moved no more than an inch. And we had to invest huge efforts for that to happen. When we tried to move Abu Mazen, we didn’t succeed. Like we said, he closed himself off, he shut down. I made many concessions, he said. The Israelis, he complained, didn’t appreciate it.”

Barnea asks what concessions Abbas has made. The Americans:

He agreed to a non-militarized state; he agreed that 80 percent of the settlers would end up in Israeli territory; he agreed that Israel would continue to hold onto territory for security purposes [mainly the Jordan Valley – N.B.] for five years, and afterward the United States would take over. He came to accept that in the Israeli view, the Palestinians would never be trustworthy.

He also agreed that the Jewish neighborhoods in East Jerusalem would remain under Israeli sovereignty, and agreed that the return of Palestinian refugees to Israel would be subject to the agreement of the Israeli government. Israel will not be flooded with refugees, he promised.” 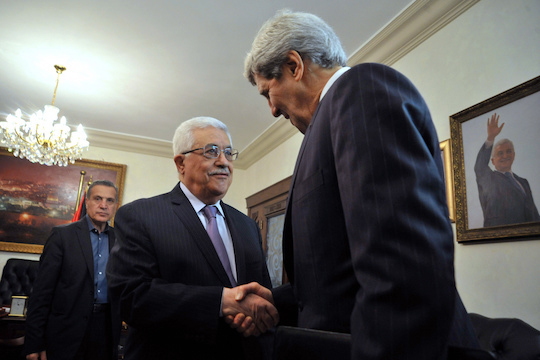 The exception that proves the rule

The one thing that U.S. officials reproached Abu Mazen for in any way was his refusal to recognize Israel as a Jewish state, and even here they suspect that his stance was influenced at least in part by Israel’s overbearing approach.

We couldn’t figure out why this bothered him so much. For us, as Americans, the Jewish character of Israel is self-evident. We wanted to believe that for the Palestinians, this was a tactic – they wanted something in return [for agreeing to the Israeli demand], so they said no.

The more Israel pressed this demand, the more the Palestinians stiffened their resistance to it. Israel made a huge deal out it – a real line in the sand. The Palestinians came to the conclusion that they were being set up. They suspected that this was an attempt to get their confirmation of the Zionist narrative.”

The U.S. officials say they think it’s going to be very hard to restart the negotiations, and on this, too, they say it’s the Israeli position that’s the problem. Abu Mazen, as the Americans note, has said he will restart the talks if Israel agrees to freeze settlement expansion for three months, spend that time deciding on the borders of a Palestinian state, and agree that Arab East Jerusalem will be its capital.

The conditions presented by Abu Mazen were rejected out of hand by Israel. Maybe someone in Israel will reconsider his position? Why is a three-month settlement freeze such a big deal? Why not draw a map [with the borders of a Palestinian state]? After all, it’s in your highest interest that an agreement be reached by mutual consent, not as a result of outside pressure [which the officials said they anticipate now from Europe and the UN]. The drawing of the map should have been the first stage [of the negotiations].”

That last point was made by the Palestinians nine months ago.

This interview is a comprehensive indictment by the Obama administration of Israel’s handling of the peace talks, and an exoneration of the Palestinians’ conduct. The Americans won’t act on it, of course, but they have set the record straight, they’ve injected a megadose of truth into the story of Israel’s domination over the Palestinians, and thus strengthened the fight to end it.