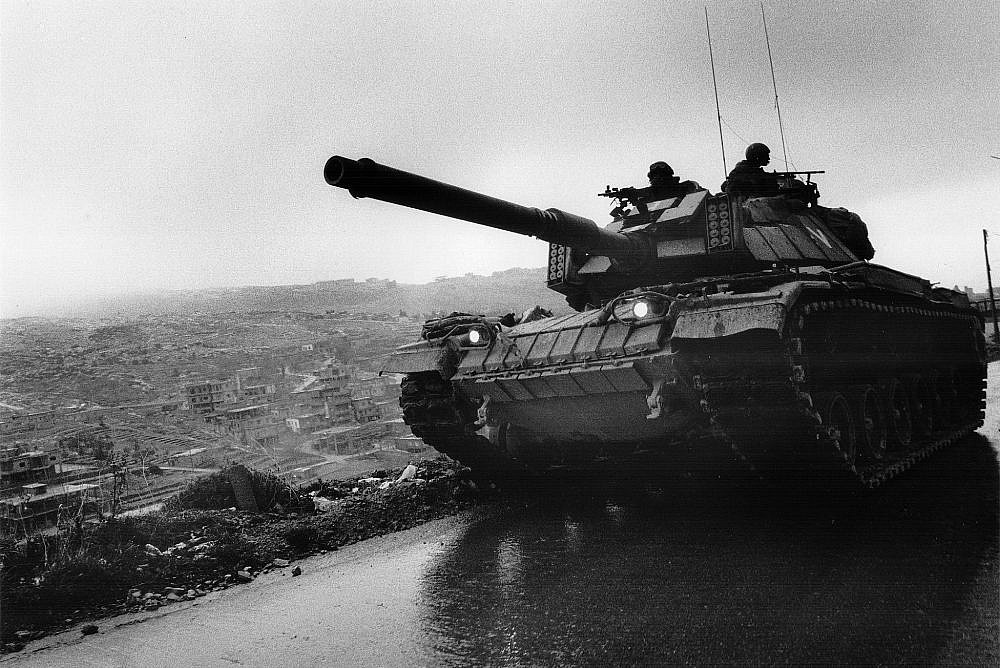 On the first day of the Russian invasion of Ukraine, many of my friends, both Palestinian and Israeli, reacted to a glaring double standard: how is it possible that Israel has been a military occupier in the Palestinian territories for 55 years, in clear violation of international law, yet no Western countries have ever imposed sanctions against it?

By the second day, however, as the scale of Ukrainian resistance became apparent, it became clear that a more accurate historical comparison for Palestinians and Israelis to understand the recent invasion is not the 1967 war that led to Israel’s occupation of the West Bank, Gaza, the Golan Heights, and the Sinai Peninsula.

Rather, the more apt comparison is with Israel’s invasion of Lebanon in 1982 and its subsequent bloody and bitter 18-year occupation — a military venture which exacerbated Lebanon’s civil war, generated a powerful, domestic anti-war movement led by the Israeli left, and ended in a resounding Israeli defeat and withdrawal in 2000.

Comparison, of course, does not mean equation, and there are certainly many salient differences. Russia is a global nuclear power with a large professional army, has no democratic freedoms, and the current invasion risks escalating into all-out war with NATO. Israel of 1982, on the other hand, was democratic for its Jewish citizens, and was still recovering from the shock of its near-defeat in the 1973 Yom Kippur War.

But despite these differences that seem to work in favor of Russia’s success, there are signs that the “Lebanese mud” scenario is unfolding in Ukraine, while demonstrations in multiple Russian cities and towns further suggest that this scenario is engulfing the Kremlin at warp speed.

The discretional war and the home front

The “Lebanese mud” scenario, as it was commonly described in Israel, is that of a huge military force seeking to overwhelm a smaller, ethnically divided country, acting on the mistaken assumption that it can occupy the area with relative ease and replace its government with a friendly one. 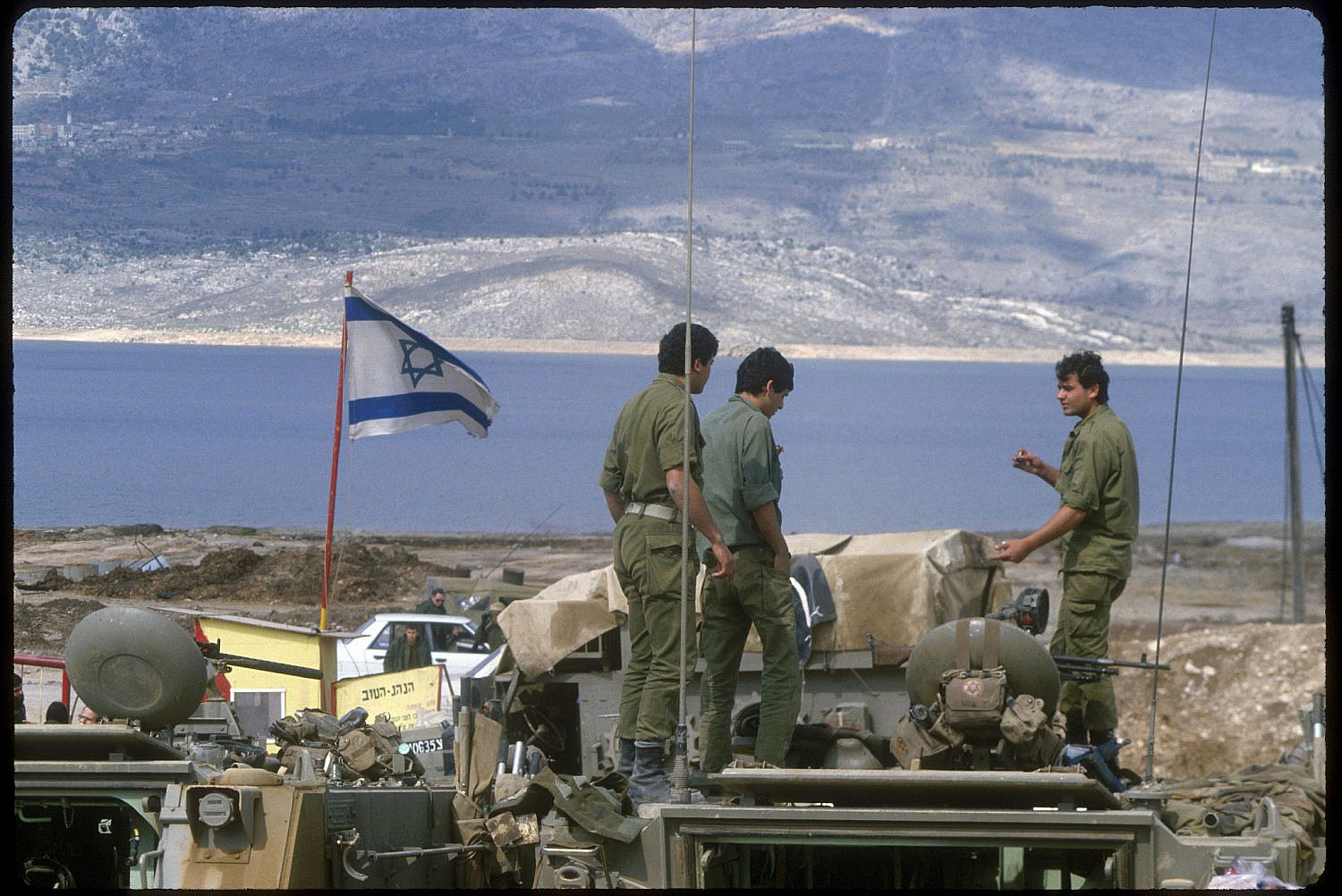 The “enemy’s” capability to resist is underestimated, the difficulty of prevailing in urban warfare is minimized, and Bertolt Brecht’s famous warning (“General, your tank is a powerful vehicle. It smashes down forests and crushes a hundred men. But it has one defect: It needs a driver”) is entirely ignored. Equally ignored is the humanity of the soldiers’ relatives and friends back home; a supportive home front is critical for a soldier’s willingness to fight, as is the conviction of soldiers and civilians alike that their country is indeed in danger.

From the outset in 1982, the Israeli public was unconvinced that the Lebanon war was vital for the country’s defense — a great difference from 1967, when Israelis believed that they were fighting for survival against Egyptian, Syrian and Jordanian forces. In fact, the main argument raised against the Lebanon war on the Israeli home front was that it was a war of choice. Even supporters of the invasion, which were quite numerous in its first days, did not believe that this was a war of survival: Prime Minister Menachem Begin openly confirmed that this was a discretionary war, while Ariel Sharon, the defense minister at the time, took his blunt candor even further and said that all of Israel’s wars were discretionary.

The Israeli government’s promise that this would be just a “short military operation” limited to a 40-kilometer incursion into Lebanon was quickly exposed as a transparent lie. The mounting Israeli casualties gradually turned the home front against the war. On the second day of the invasion, I was one of 100 students protesting in front of the Prime Minister’s Office. By the second week we were 500, and the week after that, we were 2,000 marching on the streets of Tel Aviv.

By the fourth week, 100,000 Israelis demonstrated against the war in central Tel Aviv, with the home front echoing the soldiers’ and officers’ discontent on the frontlines. By then soldiers began criticizing the war publicly, culminating with Brigadier Eli Geva’s famous refusal to command the occupation of Beirut, as well as the publication of the first conscientious objectors’ letter by Israelis who refused to serve in Lebanon. 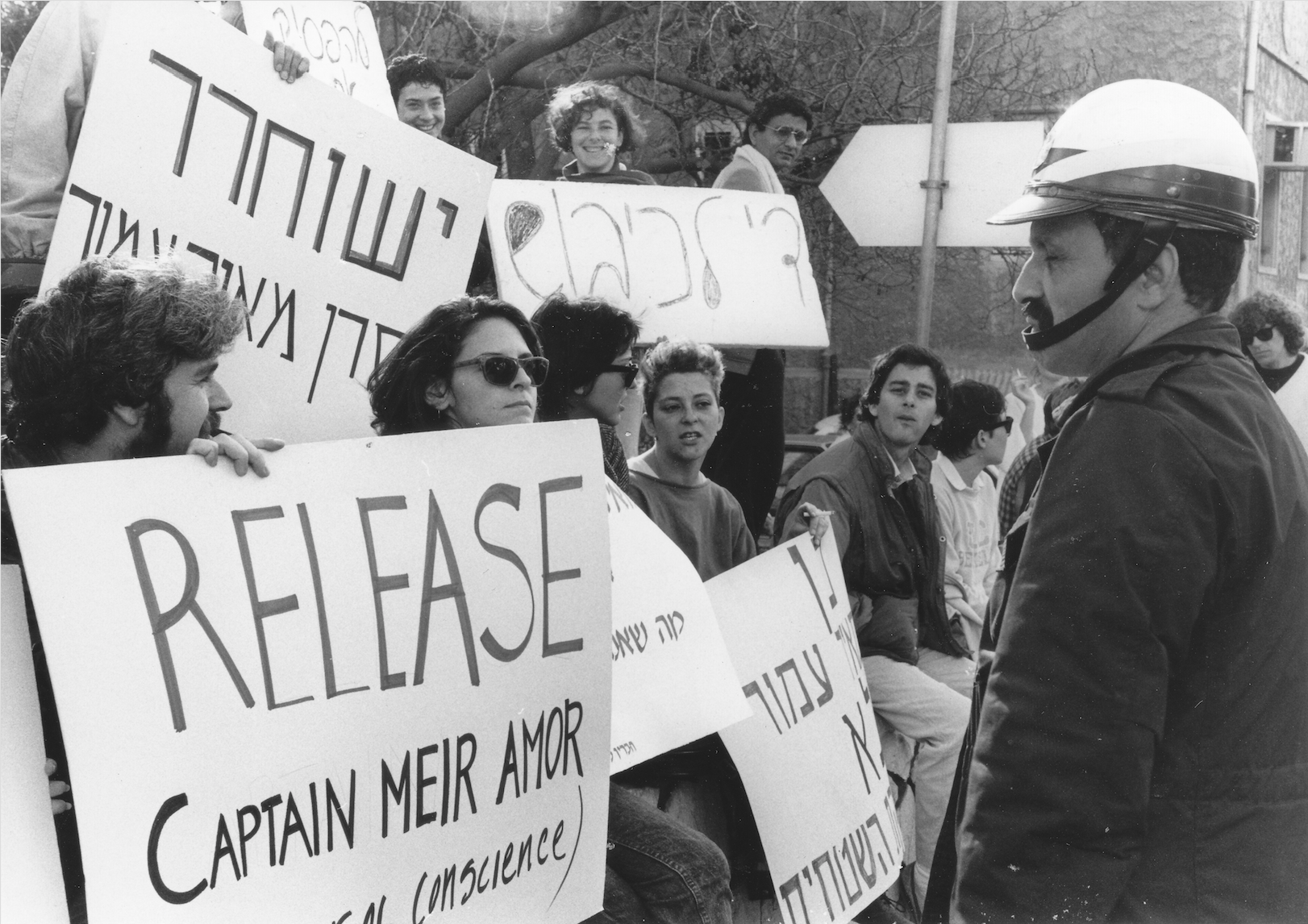 Students from Tel Aviv University protest for the release of conscientious objector Meir Amor in front of the Ministry of Defense, Tel Aviv. Amor refused to serve in the First Lebanon War and was sentenced to prison, February 15, 1988. (Vered Pe’er, Hashomer Hatzair archive/The National Library of Israel)

Similarly, in Russia today, anti-war protests in multiple cities began as early as the Ukraine invasion itself. The numerous courageous statements by Russian public figures against the war, and the fact that some Russian soldiers seemed to prefer surrendering without a fight, suggests that the Lebanese scenario may even pale in comparison to the Ukraine invasion.

Israel had multiple factors and circumstances that could facilitate a relatively smooth victory compared to Russia. It had a clear enemy in the PLO, could count on support from the United States and Western Europe, and had a major partner inside Lebanon that was keen on doing away with the armed Palestinian groups in the country. And in fact, Israel achieved its most immediate goal: after six weeks of brutal siege in Beirut, Yasser Arafat and PLO fighters were forced to evacuate to Tunisia.

But the victory was partial; the overconfident Israeli army remained as an occupying force in southern Lebanon for another three years, before retreating under the pressure of local Lebanese militias, but not before organizing a collaborator militia of Christian Phalanges in the so-called “buffer zone.” Israel remained active in this zone, suffering constant casualties and accomplishing no meaningful military advances for another 15 years.

In Ukraine, however, Russia has neither a defined enemy that can justify its invasion nor a major friendly force that can support it, except in the Donbas region. On the contrary, the average Russian treats their Ukrainian neighbors as part of an extended national family, and many have close family ties and friendships. And, in a face-to-face encounter on the frontline, both sides often speak Russian. 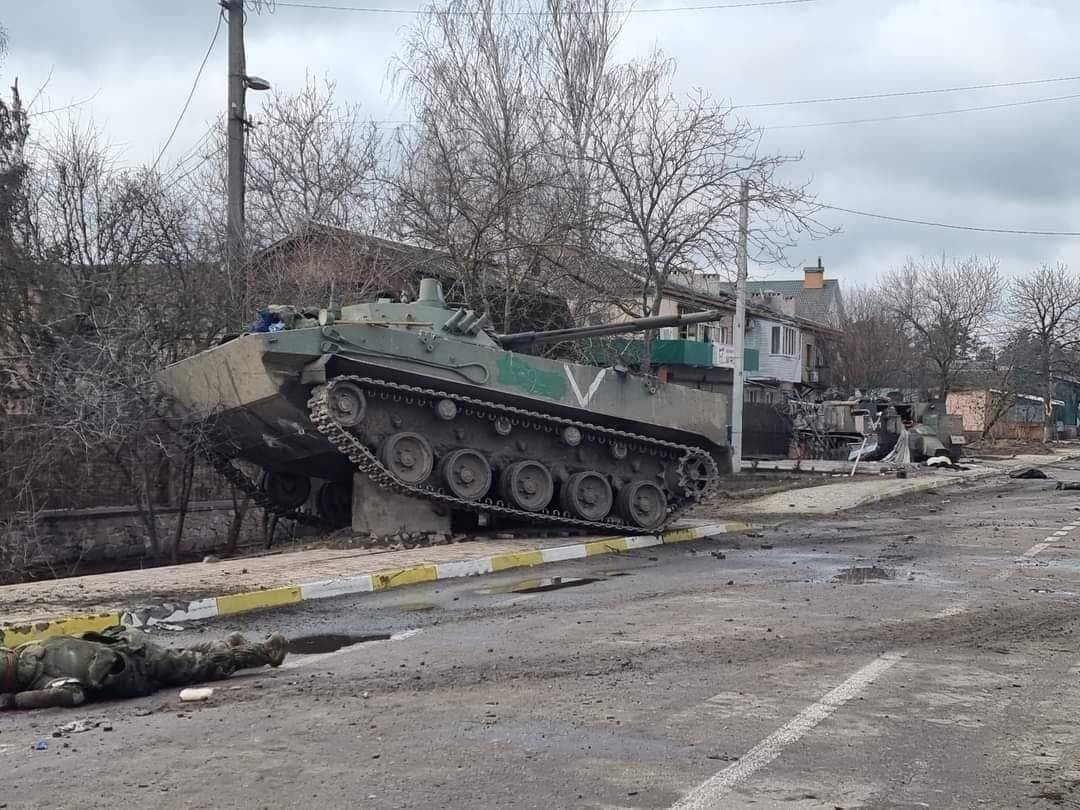 BMD-4M of the Russian Federation stuck in the Battle of Hostomel, March 4, 2022. (Chief Directorate of Intelligence of the Ministry of Defence of Ukraine / CC-BY-4.0)

The differences also extend to the nature of their militaries. The IDF is a purported people’s army based on mandatory conscription and a large force of reservists. With the Russian army, only part of the soldiers are recruited through mandatory conscription, professional soldiers in elite units sign a contract for their service, and are supposed to consent to go out to war, although many appear to have been bullied to sign up. Now, because Russian soldiers have been forced to participate in a discretional rather than defensive war in Ukraine, their motivation is minimal.

Above all, perhaps the biggest difference is that, although the U.S. and Western Europe were not enthusiastically supportive of the Israeli invasion, and even brokered the agreement that saved Arafat, they never imposed sanctions on Israel to push back its war.

In contrast, the scale of the sanctions against President Vladimir Putin, his multi-billionaire supporters, and the whole of Russia’s population are so overwhelming that even citizens of a global power might not be able to stand them for long. The delegitimization of Russia in the “West” (not so much in the “rest”) is huge, while Israel’s military violence against civilians is at best condoned and at worst ignored. Far more moderate sanctions than those against Russia could have easily forced Israel out of Lebanon in the 1980s, not to mention the occupied territories today.

The value of making such historical comparisons is not only for the sake of understanding variations and different paths, but also for concluding shared lessons. Most commentators in the media are currently preoccupied, if not obsessed, with analyzing Putin, who has been cast as a vicious dictator, a madman, or a combination of both. Others focus on geopolitical analyses of relations between the “superpowers,” an outdated term that has now been rejuvenated.

The comparison made here between the illegitimate invasions of Lebanon and Ukraine, however, may offer better insights into current developments. First, and most importantly, the comparison can explain why Putin expanded Russia’s war from its initial plans for a ground incursion to the murderous bombing of civilian populations; this is likely a reaction to the Russian army’s failure to easily defeat the Ukrainian resistance and occupy the cities. 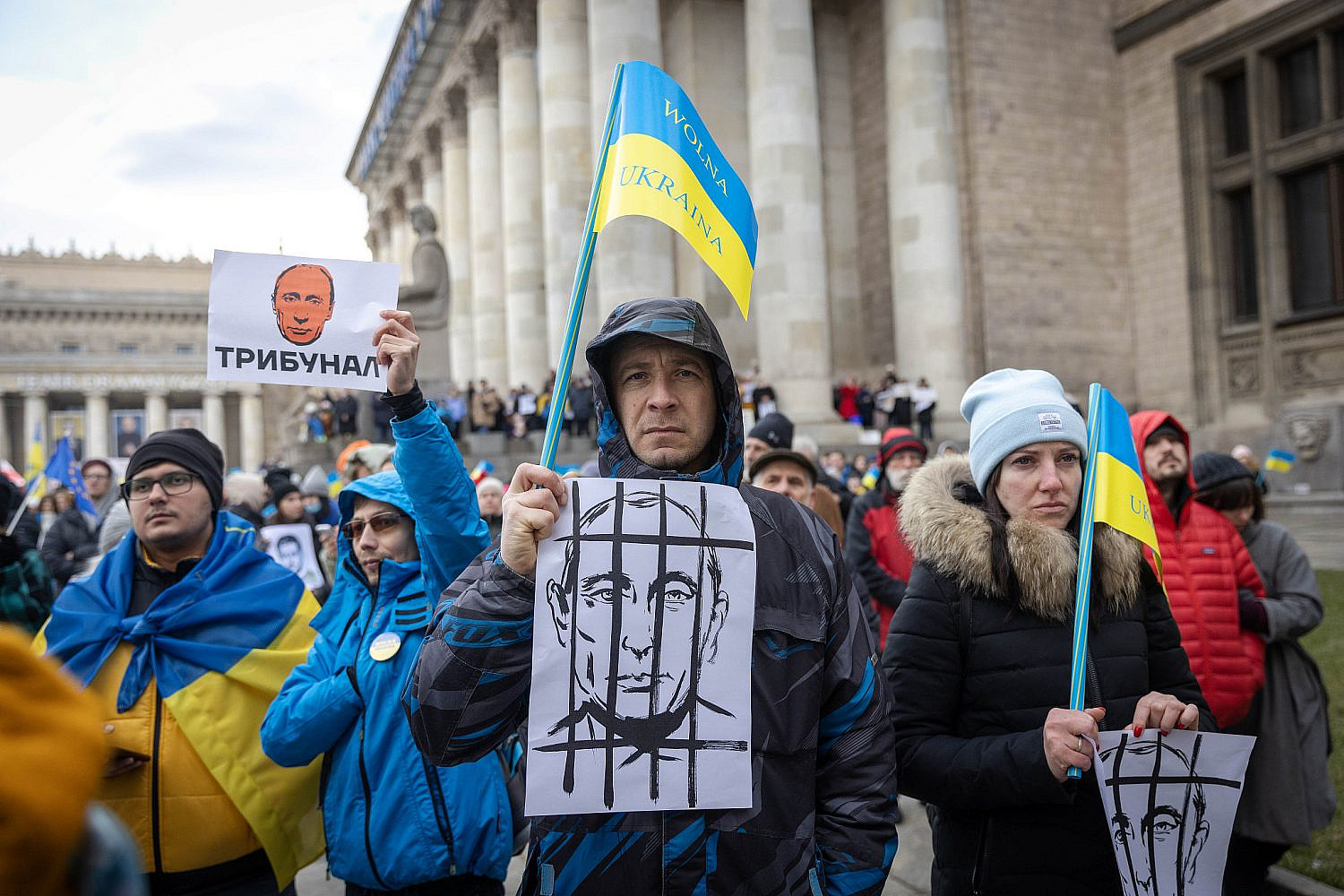 Second, it can explain the larger consequences of Putin’s inability to put a swift end to his misadventure; if he ends this “operation” without a clear victory, Russia’s defeat might have unprecedented repercussions not only vis-à-vis NATO and the United States, but also on relations with states like Belarus, Georgia, and others under its orbit of influence, and obviously on Ukraine.

From these two cases, we learn that military power alone is not necessarily enough to facilitate an easy conquest of weaker neighbors — especially when the invaded are ready to resist, and when the occupying soldiers don’t believe in the goals of the war. This was already well known from imperialist wars and occupations overseas, like in Algeria and Vietnam, but we can see that it is true for neighboring power relations as well. The aspiration of peoples for self-determination and independence always matter.

However, I have an even more ambitious wish from making these comparisons. I wish, after the end of this horrific Ukraine war, that the double standards so habitually employed by the United States and Western Europe will suffer a severe blow. I wish a newfound, stronger stance against the targeting of civilians and against military occupation will better inform how they respond to these violations outside Europe, too.

Translated from Hebrew by Ami Asher.

Professor Lev Grinberg is a political sociologist from Ben Gurion University, President of the Israeli Sociological Society, and author of “Politics and Violence in Israel/Palestine” (Routledge, 2010). He was the speaker of the Conscious Objectors movement in 1982 – Yesh Gvul.