Unprecedented report calls for UN Member States “to assume their responsibilities in their relationship to a State breaching peremptory norms of international law.” 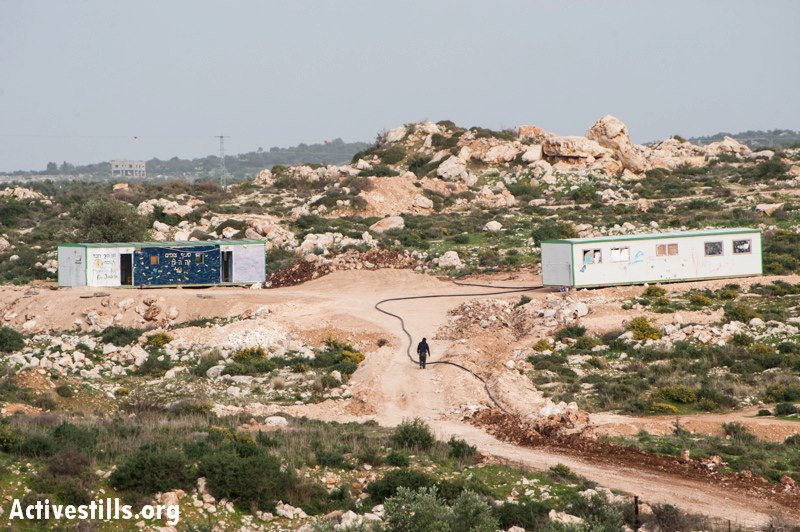 January 28, 2013: Two caravans form a new Israeli settler outpost on land belonging to the Palestinian West Bank village of Jayyous. The caravans were put there last week and are already connected to the water lines of the nearby settlement of Zufit (photo: Activestills)

The United Nations Human Rights Council has published its fact finding mission’s report on the settlements. The report concludes that Israeli settlements are constructed for the benefits of Jews only through a system of ethnic segregation and military law, and are in violation of the Fourth Geneva Convention, which forbids the transfer of civilian populations into occupied territory by the occupying force. According to the report:

Israel must, in compliance with article 49 of the Fourth Geneva Convention, cease all settlement activities without preconditions. It must immediately initiate a process of withdrawal of all settlers from the OPT.

Israel is a signatory to the Fourth Geneva Convention but has concluded that it does not apply to the territories occupied from Jordan and Egypt in 1967, since both countries abandoned any claims to this land. Israel considers the territories “disputed” (a position taken recently by the Levi Commission, which called upon Israel to legalized all outposts built on Palestinian land) However, even the Israeli narrative doesn’t explain ethnic segregation in the West Bank, military law and the absence of human or political rights for the non-Jewish civilian population in the West Bank.

There are two important articles in the HRC report which go beyond the usual condemnations of the settlements that have been issued for decades by the international community. First, the Human Rights Council calls upon other nations, agencies and companies to break ties with the settlement project – a step which might open the door for sanctions against settlement products or for the enforcement of relevant articles in trade agreements with Israel, for example by the European Union.

116. The Mission calls upon all Member States to comply with their obligations under international law and to assume their responsibilities in their relationship to a State breaching peremptory norms of international law – specifically not to recogniזe an unlawful situation resulting from Israel’s violations.

117. Private companies must assess the human rights impact of their activities and take all necessary steps – including by terminating their business interests in the settlements – to ensure they are not adversely impacting the human rights of the Palestinian People in conformity with international law as well as the Guiding Principles on Business and Human Rights. The Mission calls upon all Member States to take appropriate measures to ensure that business enterprises domiciled in their territory and/or under their jurisdiction, including those owned or controlled by them, that conduct activities in or related to the settlements respect human rights throughout their operations.

The report also explicitly suggests that the International Criminal Court could deal with the issue of the settlement. A press release on the Human Rights Council site states:

The report states that Israel is committing serious breaches of its obligations under the right to self-determination and under humanitarian law. The report also concludes that the Rome Statute establishes the International Criminal Court’s jurisdiction over the transfer of populations in the Occupied Palestinian Territory.

Israel has refused to cooperate with the fact-finding mission. The United States has warned the Palestinians in the past not to take Israel to the International Criminal Court, as part of its tradition of preventing any punitive action in response to human rights violations by Israel in the occupied territories. The United States was the only country that voted against the fact finding mission on the settlements.

Related:
Panel appointed by Netanyahu concludes: There is no occupation
US Envoy: Congress will punish UN if it recognizes Palestine (UPDATED)
Google Street View to feature West Bank settlements