Whatever the passage of a UN resolution criticizing the settlements may bring, the fallout has already made one thing clear: the Israeli government subscribes to a de facto ‘Greater Israel’ policy. 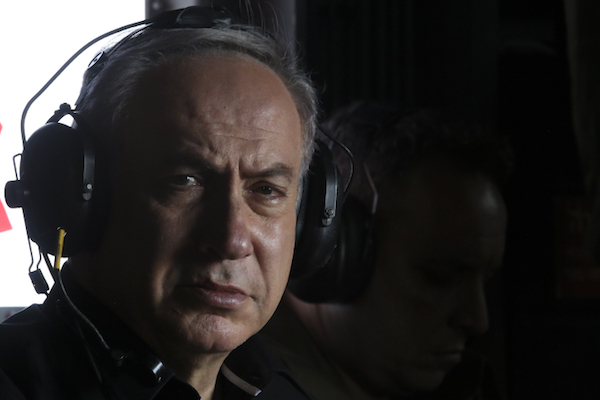 Israeli Prime Minister Benjamin Netanyahu in a helicopter as he tours the separation fence near the Palestinian town of Tarqumiyah, West Bank, July 20, 2016. (Marc Israel Sellem/Pool)

In the summer of 1967, before anyone was aware of just how durable Israel’s occupation of Palestinian and Syrian territory would prove, a movement emerged calling for the newly conquered land to become part of “Greater Israel.” Formed primarily of Labor Zionists, the movement counted such luminaries as SY Agnon and Nathan Alterman among its ranks. It failed to make a dent at the 1969 Knesset elections, however, and was later absorbed into what would become the Likud.

Fast forward 50 years, via short-lived peace attempts and an ill-devised set of accords whose greatest accomplishment was to entrench the occupation, and with Likud in power for the better part of the past decade, it is clear that the embers of a Greater Israel campaign have evolved into de facto policy. The UN Security Council’s passage of Resolution 2334, which condemns the settlements and calls for an immediate halt to their expansion, is merely the latest — and possibly most reverberant — incident to unmask the fiction of Israel’s commitment to a viable two-state solution.

Attempts by the Israeli government and press to characterize the resolution as anti-Israel send a singular, clear message: the West Bank and its Jewish settlements are as much a part of Israel as Tel Aviv, Eilat and Haifa. That this is a fairly mainstream view within the governing coalition has been abundantly obvious within Israel for some time now, as it has been to clear-eyed observers abroad, and certainly to Palestinians.

But for foreign governments whose Middle East policy still hinges on the idea that wringing land concessions out of Israel is simply a matter of time, the Netanyahu government’s reaction to the UN vote emphasizes the futility of that path. Israeli diplomats’ and politicians’ half-hearted peddling of their commitment to a two-state solution has never rung so hollow. 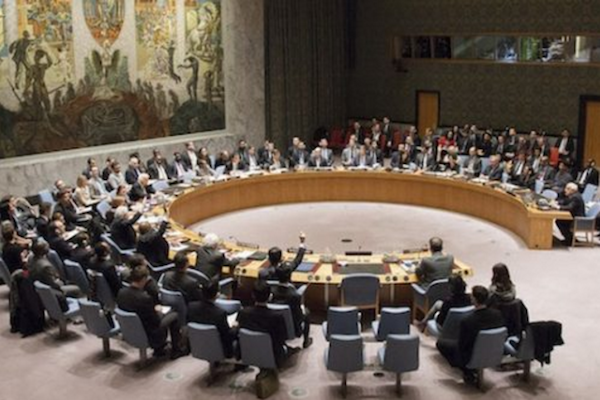 The hysteria seen in Israel’s response to Resolution 2334 — even before it passed — does more than just put on full display Jerusalem’s antipathy to the very idea of conceding territory (and if you need further proof, see Amona). It reveals, once again, the levels of defamation and distortion to which Israeli politicians will descend when trying to torpedo any discussion that a) acknowledges the occupation for what it is, and b) asserts that it must end without Israel annexing the West Bank.

To compare support for the resolution to supporting “planes hitting buildings and trucks killing people in Berlin,” as Education Minister Naftali Bennett did, is slanderous on two fronts: it equates support for Palestinian rights with the impulse to commit mass murder, and it also conflates Palestinian nationalism with radical Islamism — the majority of whose victims, lest we forget, are Muslims. It’s the latest evolution in a hasbara formulation that struck oil in 2014, when Prime Minister Benjamin Netanyahu artlessly and yet somewhat effectively portrayed Hamas and the Islamic State as two variations on a common theme.

To call the Security Council resolution anti-Semitic, as Kulanu MK and former Israeli ambassador to the U.S. Michael Oren did, not only misuses the label at a time when the resurgence of genuine anti-Semitism is a real and present threat to American Jews. It also sets up the obscene implication that military occupation and flouting of international law are somehow Jewish traits, no matter what Oren’s original argument was. Israeli Ambassador to the UN Danny Danon fared little better when he announced that building Jewish settlements in occupied East Jerusalem was no different from building in Paris, London or D.C.

As for Netanyahu, he has responded in the only way he knows how: threats, baseless accusations, self-isolation and petulance, as seen in his Christmas Day summons to the ambassadors of countries that supported the resolution. His fury at U.S. President Barack Obama for his so-called “betrayal” — which comes three months after the U.S. approved a $38 billion military aid package to Israel, its biggest ever — is the indignation of a man who is used to manipulating diplomatic channels, and on this occasion failed. It was the same following the Iran deal.

Netanyahu’s primary mission will now be to create a big enough distraction at home to ensure that talk of his failure in the international arena is short-lived. He is an expert at pushing negative stories about himself out of the headlines, and there’s no reason to assume this time round will be any different; indeed, the mudslinging that commenced straight after the resolution’s passage is primarily Netanyahu’s attempt to convince his electorate that he was stitched up by malign, conspiring forces, and that he now has to defend Israel against the world’s treachery. What he’s also inadvertently revealed, however, is that his sole policy regarding the West Bank is a drift towards a de facto Greater Israel, buffeted along by the more radical elements in his government.

As my colleague Mike Schaeffer Omer-Man wrote immediately following the vote, there’s no knowing exactly what this resolution will bring or how it can be enforced. It’s also unclear whether or to what extent the incoming Trump administration will maintain the U.S.’s longstanding opposition to Israel’s settlement building. But at the very least, the lead-up to and fall-out from the UN vote has again revealed the daylight between Israel’s rhetoric and its actual intentions regarding the occupied territories. The real question is whether the international community will now formally acknowledge that dissonance or continue to put the words they want to hear in Israel’s mouth.