Neither the army nor the police bat an eyelid when settlers set up shop in the front yard of a privately-owned Palestinian home for an entire weekend. 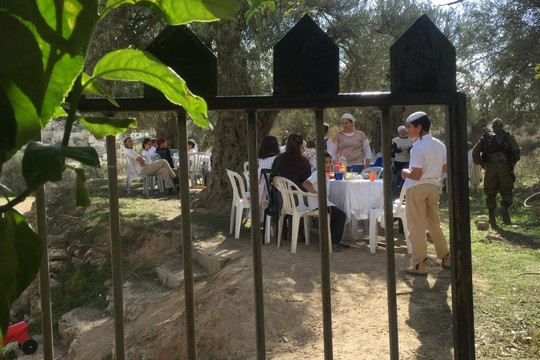 Dozens of settlers in Hebron took over the front yard of the home of well-known local Palestinian nonviolent activist Issa Amro over the weekend. Israeli soldiers remained with the settlers for over 24 hours, guarding them as they slept, prayed, and ate — all the while blocking the entrance to the house.

Amro rents the house from its Palestinian owner, using it as the community center for the “Youth Against Settlements” organization, which teaches local Palestinian youth about nonviolent resistance.

The settlers were eventually forced to leave Saturday evening when police arrived and declared the area a “closed military zone.” The Palestinians — aside from Amro — were forcibly removed from the premises, after which the settlers left on their own accord. The only person who the army is currently letting enter and exit the house is Amro.

The settlers arrived on Friday with mattresses and food in tow, following the arrest of a young Palestinian who volunteers at the youth center for allegedly carrying a knife. Amro was arrested alongside the youth.

Speaking to +972’s Hebrew-language sister site, Local Call, Amro described how he was arrested by the soldiers for trying to convince them the youth had been detained on false charges. Amro further emphasized that he and the rest of the activists in the organization do not believe in using violence.

Despite his protestations, Amro says he was taken to an IDF base in Hebron’s Tel Rumeida neighborhood and was locked in a bathroom stall for 4-and-a-half hours as punishment. He was then taken to the police station in Hebron where he was interrogated for allegedly disrupting the soldiers from fulfilling their duty, as well as for allowing a terrorist to stay in his home. He was released after an hour.

Amro claims that the police wanted to release the youth, too, but were afraid of the settlers’ reaction so they left him in detention. 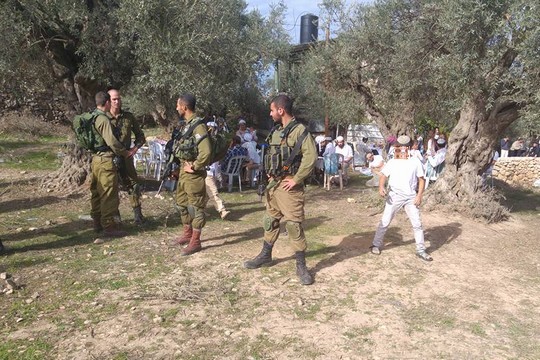 Amro and his landlord filed a complaint with the police over the settler takeover, which blocked the path into the house. The police officers who arrived at the scene told Amro and the landlord that the Israeli army’s Hebron’s brigade commander authorized the settlers to be there, thus leaving the police powerless. Amro said the soldiers threatened to lock him in a bathroom stall again, this time for longer, if he continued to complain.

According to the police, the army is in charge of dealing with such issues.

The IDF Spokesperson responded to the events more than 24 hours after the settlers arrived at Amro’s home:

The settlers arrived at the Palestinian-owned land in Tel Rumeida in an illegal fashion, IDF and police forces are there in order to prevent an increase in friction. The settlers were asked to leave. They will be removed should it become necessary.

The army did not provide an explanation for Amro’s arrest.

It remains unclear why the police waited over 24 hours before removing the settlers, or why Palestinians must be kept away from the community center because of settler harassment.