In its refusal to make compromises on zoning restrictions for an unrecognized Bedouin village in the Galilee, Israel demonstrates that its preferred demographic balance is higher on the list of state priorities than the protection of the welfare of its citizens.

In the early 1950s, a Bedouin Arab named Atif Mohammad Sawa’ed (Abu Walid) bought a parcel of land from the Shafa ‘Amr municipality, 25 kilometers east of Haifa, hoping to build a home for his new wife and his family. The land he bought in Umm al-Sahali lies on a hilltop, no more than two kilometers south of Shafa ‘Amr in the Lower Galilee. It is a beautiful place, and at that time it was uninhabited. From the front steps of the home he built, you can see the shimmering blue waters of the Mediterranean, the urban sprawl of Haifa, and if you look north on a clear day, you can even see into Lebanon. 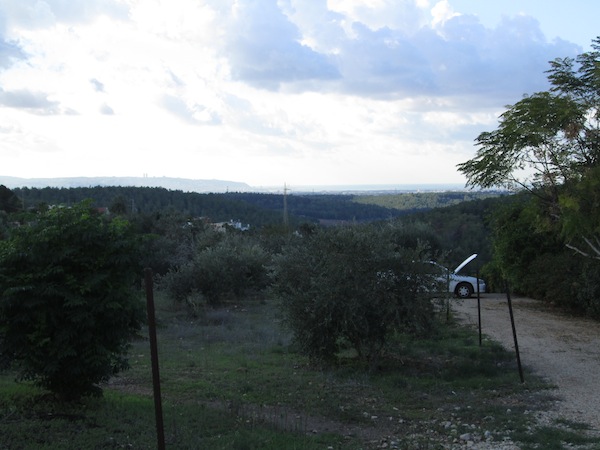 A view of Haifa from the village of Umm al-Sahali (photo: Paul Karolyi)

As the Sawa’ed family grew, the surrounding population slowly changed. In the early years of Israel’s existence, the government instituted a demographic policy of “Judaization” to encourage Jews to settle the Galilee.

The Palestinian Arab citizens of Israel face a difficult choice. Many Arab municipalities are overcrowded. State-sanctioned policies, in addition to prohibitive costs, often make it difficult for Arabs to move in to Jewish communities (see the “Admissions Committee Law” for background). The Israeli government generally refuses to sanction any growth in Arab municipal lands. So the choice is often between living in homes that cannot hold growing families or breaking the law by building homes without permits.

In the early 1950s, 25,000 dunam of land, 6250 acres, were expropriated from Shafa ‘Amr. The confiscated land was initially designated for military use but was later developed for Jewish settlements. Since the initial seizure, the population has grown by 27,000, but the amount of land allocated to the population has only grown by 9,000 dunam, 2250 acres.

The lack of available housing in Arab municipalities is a well-documented phenomenon. This is the story of how the restrictions placed on Shafa ‘Amr continue to directly affect Abu Walid and the Sawa’ed family.

For Abu Walid, the restrictions to Shafa ‘Amr’s expansion meant Umm al-Sahali – now a small town whose residents are predominantly Abu Walid’s extended family – became isolated. It remains one of many unrecognized villages in Israel. Two kilometers from Umm al-Sahali, a Jewish town called Adi was established in 1980 as a part of the “Lookouts in the Galilee” plan. Adi is administered by the Emek Yisrael Regional Council. Its proximity to Umm al-Sahali means that the governmental administration of Umm al-Sahali land fell to Emek Yisrael as well, severing the link between the people and the land

While Abu Walid’s land is in Emek Yisrael, there are no bus lines that take his children to school, there is no electricity in his homes, and there is no connection to central plumbing. The residents of Adi enjoy all these services. In fact, a power line was built through Umm al-Sahali leading from Adi to the central grid. It literally traverses Abu Walid’s land while skipping over his home. 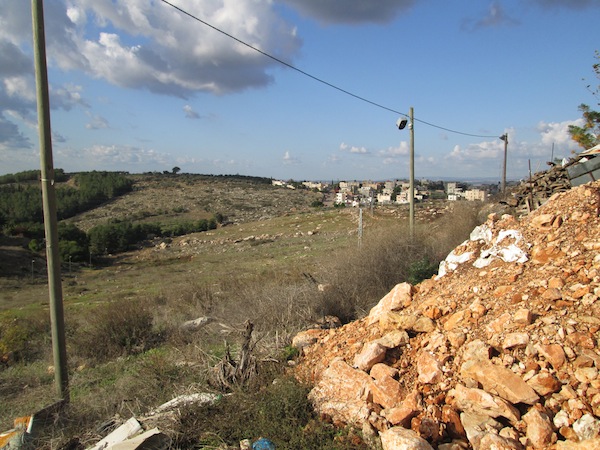 In 1994, the situation got worse for Abu Walid’s family when the Haifa District Court ruled that six houses in Umm al-Sahali were to be demolished. The government then set in motion a plan to remove them from the hilltop, although it would take four years for the bulldozers to reach Umm al-Sahali. But then something unexpected happened: the community rallied behind Abu Walid’s family. And not just the Palestinians living in Shafa ‘Amr, but also the Jews living in Adi who had developed close relationships over the years with their neighbors in Umm al-Sahali. So, when the bulldozers started knocking down buildings, people came out in droves. What started as protests turned into riots when the police showed up. Hundreds of people were arrested, and at least 40 were injured in a crossfire of tear gas, rubber covered-steel bullets, and live ammunition. Though the protests eventually stopped the demolitions, three homes were destroyed that day.

Not only did the community turn out to protest the demolitions, but its members stuck around to help rebuild as well. All three homes that were destroyed that day have since been reconstructed. 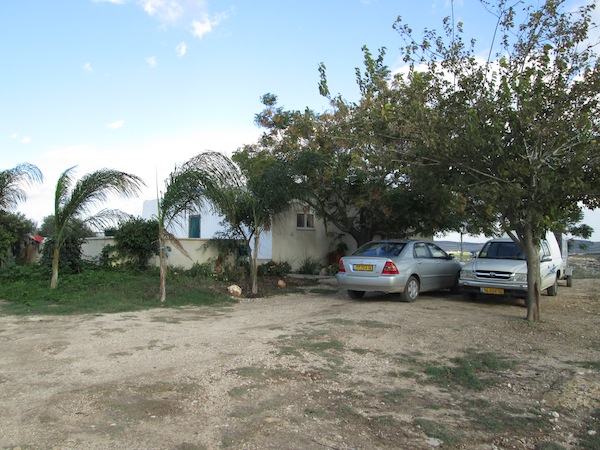 One of the village homes rebuilt in 1998. (photo: Paul Karolyi)

Despite petitions from residents requesting permits for new houses and to legalize the rebuilt structures, the Emek Yisrael Regional Council refuses to recognize Umm al-Sahali or allow for its expansion. “There are men, 30 years old, living in the houses they were born in,” Abu Walid said. “They cannot get married or start a family.” The 80 residents of Umm al-Sahali, still predominantly the extended family of Abu Walid, live today in 13 small houses.

Earlier this year, Abu Walid’s son, Sayid Sawa’ed, got married. Out of desperation, he and his new bride built a small structure out of aluminum siding near his father’s home. They do not call it a house, as it is not a permanent structure. They choose instead a word in Arabic, kowkh, which translates best as “shack.” While Sayid’s new home is dilapidated on the outside, the interior is awash in modern luxuries. He has fitted out his new living space with leather furniture, numerous kitchen appliances, and a flat screen TV. The problem is not the money. The problem is that the government simply to permit the construction of a new home.

Abu Walid tells me this story on a tour of Umm al-Sahali. Pointing to a small building in the distance, he says, “Do you see that? That is a stable for horses. The people of Adi have electricity and air conditioning for their horses and we have nothing.”

Abu Walid finds a way around every restriction the Israeli government places on his land. When their generators were seized, the people of Umm al-Sahali outfitted each of their thirteen houses with a functioning solar panel. But after 50 years of creativity, it may be difficult to find a solution for recent developments. 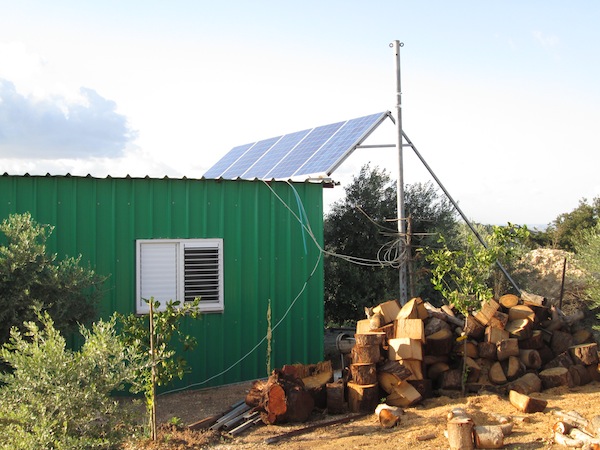 Solar panels on one of the houses in the Bedouin village of Umm al-Sahali. (photo: Paul Karolyi)

Following the construction of Sayid’s makeshift “shack” in the spring of 2012, the Haifa District Court once again ordered the demolition of houses in Umm al-Sahali. This time seven of the 13 were condemned. Abu Walid, as head of the village, took his brother and went to the Emek Yisrael Regional Council to appeal the decision. They had several meetings with various officials, but the head of the council, Eyal Betzer defended the court’s decision and sent Abu Walid home.

Unlike in some other unrecognized villages in the Negev, the government has not offered the Sawa’ed family access to alternative housing. “They must want me to leave. Why should I? I own this land,” Abu Walid says.

My visit to Umm al-Sahali coincided with the planned date of the first demolition.  Since Tuesday, November 14, Sayid and his wife live in fear of waking up to bulldozers with orders to destroy their home. They don’t know when it will happen; it could be a week, a month, or even a year. But they know it is coming.

Abu Walid believes that Umm al-Sahali should be absorbed by the Shafa ‘Amr municipality. With roads leading into town, bus routes near his home, and power lines, Abu Walid could finally get his kids to school on time and keep some lights on at night for them to do coursework. The Shafa ‘Amr municipality is on record approving this plan, and the Higher Arab Monitoring Committee supports it as well. 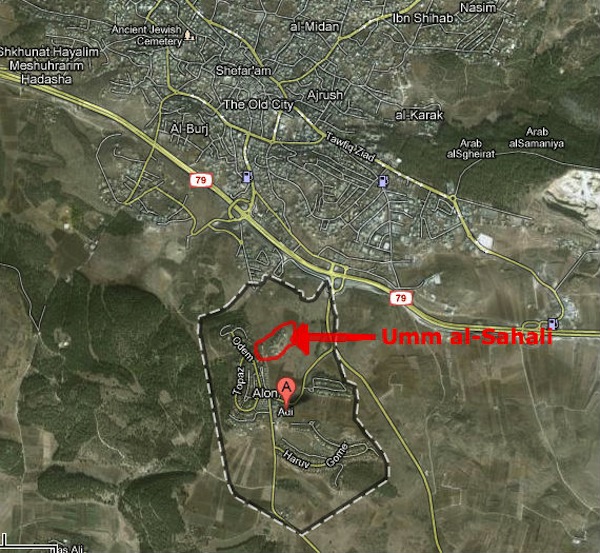 A satellite image of the Bedouin village of Umm al-Sahali.

But the Israeli government will not accept this proposal. It would mean expanding the borders of Shafa ‘Amr and allowing for growth in an Arab municipality. In its refusal to make this zoning adjustment, Israel demonstrates that its preferred demographic balance is higher on the list of state priorities than the protection of the welfare of its citizens. “Umm al-Sahali is like Gaza inside Israel,” Abu Walid says. “We are living under siege.”

Paul Karolyi is an American citizen living in Israel.  He works as a human rights advocate in Nazareth.